Press Release by
Cristian_25H
Feb 21st, 2012 16:31 Discuss (3 Comments)
Dell's further expansion as an enterprise solutions and services provider highlighted the company's most successful financial year ever. New corporate highs were achieved for a full fiscal year with revenue of $62.1 billion, earnings per share of $1.88 (GAAP) and $2.13 (Non-GAAP), and revenue from enterprise solutions and services of $18.6 billion.

"Our customers think of Dell in much broader terms now, trusting us with their comprehensive IT needs, from the datacenter to the device," said Michael Dell, chairman and CEO. "We are more committed than ever to both developing and investing in innovative solutions that deliver greater value and better outcomes for our customers."

"The expanding mix of revenue and earnings from enterprise solutions and services is critical to our future," said Brian Gladden, Dell chief financial officer. "Our full-year results are a strong reflection of the significant progress we made this year on our strategic priorities."

- Cash flow from operations in the quarter was $1.8 billion, and Dell ended Q4 with $18.2 billion in cash and investments. For the fiscal year, Dell spent $2.7 billion to purchase 178 million shares of Dell stock. 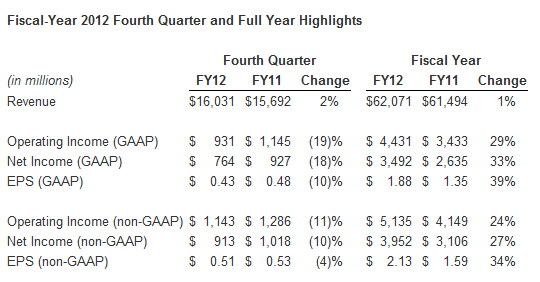 - Dell-owned storage grew 33 percent to $463 million, led by offerings based on Dell-owned intellectual property, including Compellent, which had sequential growth of more than 60 percent.

- Large Enterprise had revenue of $4.9 billion in the quarter, a 5 percent increase with broad-based growth across both client and enterprise solutions and services. Services revenue increased 18 percent. Operating income for the quarter was $461 million, or 9.4 percent of revenue. Revenue for the full year was $18.5 billion, up 4 percent from the previous year.

- Public revenue was $3.9 billion, a 1 percent decrease. The segment was affected by continued weakness in U.S. Federal and Western Europe. Services revenue increased 7 percent and Dell IP storage revenue was up 32 percent. Operating income for the quarter was $327 million, or 8.3 percent of revenue.

- Small and Medium Business revenue grew 6 percent to $4 billion. Enterprise solutions and services revenue was up 18 percent during the quarter to an all-time high of $1.2 billion. Services growth was 28 percent in the quarter. SMB delivered $412 million in operating income, or 10.3 percent of revenue, driven by the better mix of higher-margin enterprise solutions and services.

- Consumer revenue was $3.2 billion, a 2 percent decline for the quarter. Operating income was $39 million or 1.2 percent of revenue, a 43 percent decline. Revenue weakness was largely concentrated in the United States, while revenue from non-U.S. countries grew 10 percent.

The company will continue to prioritize operating income and cash flow. For fiscal 2013, the company expects non-GAAP earnings per share to exceed the record $2.13 it delivered in fiscal 2012 and expects to continue strong execution, with cash flow from operations exceeding net income. For Q1, the company expects revenue to decline approximately 7 percent sequentially, which aligns with normal seasonality adjusted for the fourteenth week.