by
btarunr
Jul 22nd, 2015 04:08 Discuss (32 Comments)
Here are some of the first pictures of GIGABYTE's flagship socket LGA1151 motherboard targeted at professional overclockers, the Z170-SOC Force. Built in the standard ATX form-factor, this board offers strong CPU and memory VRM, and yet offers a connectivity loadout that's in league with "gaming" class motherboards. To begin with, the board draws power from a combination of 24-pin ATX, 8-pin EPS, 4-pin ATX, and 6-pin PCIe power connectors. A 24-phase VRM powers the CPU, its heatsink features preparation for liquid cooling. The CPU socket is wired to four DDR4 DIMM slots (supporting up to 64 GB of dual-channel DDR4-3200 memory).

Expansion slots include four PCI-Express 3.0 x16 (electrical x16/NC/NC/x4 or x8/NC/x8/x4 or x8/x4/x4/x4); and three PCI-Express 3.0 x1. Storage connectivity includes three M.2 slots (32 Gb/s), three SATA-Express 16 Gb/s ports, and a total of eight SATA 6 Gb/s ports. USB connectivity includes two USB 3.1 ports (two type-A, from which one converts to type-C if it's populated), eight USB 3.0 ports (four on the rear panel, four by header), and a number of USB 2.0/1.1 ports, including two type-A ports near the SATA ports (could help serve as "front-panel" ports in bench-type case setups). Display outputs include one each of DVI, HDMI and mini-DisplayPort (which likely also means availability of Thunderbolt 20 Gb/s). Gigabit Ethernet and GIGABYTE's latest generation Amp-Up audio solution make for the rest of it. A plethora of onboard OC control options are available. Find more pictures at the source.

EarthDogAnyone getting the SOC FORCE and not taking it subambient are simply buying a Ferrari but limiting it to driving in a school zone. Save your money boys until you are ready to benchmark with the big boys is my advice. :)

the board really attracts me… but that’s it … I rather to keep my system and add just a unlucked i7 for future proof a little more my rig,

if I were about to build a new system I will wait to Cannonlake, for making the right decision and knowing a little more about the new processor and how it will perform based on older results from skylake for that time,

emissary42Then how about three m.2 sockets?

EarthDogAnyone getting the SOC FORCE and not taking it subambient are simply buying a Ferrari but limiting it to driving in a school zone. Save your money boys until you are ready to benchmark with the big boys is my advice. :)

IF you have to save money to OC at that level, you're doing it wrong. :P

But I dunno, since they had LN2 X99 board, maybe they will eb obvious, and this might be a great board to OC memory @ ambient.
#30

AsRockI still think it's kinda meh :p, then again not liked many at all for looks even more so this one. Although this one replacing the red with black would be much better. i would be taking as much of that plastic crap off as possible still lol.

Then again i would still pick what ever one had best options \ price for me how ever it looked. 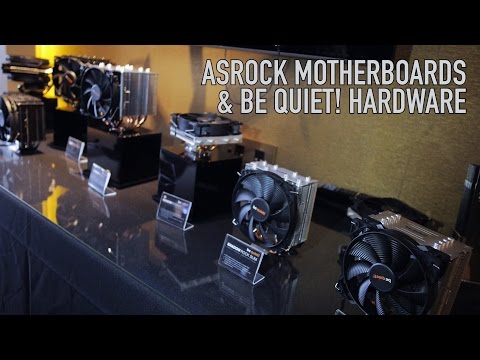 BBQ9m-ATX is the size of the MB that I'm waiting for.