by
AleksandarK
Jan 3rd, 2020 03:00 Discuss (180 Comments)
As we approach the release of NVIDIA's Ampere GPUs, which are rumored to launch in the second half of this year, more rumors and information about the upcoming graphics cards are appearing. Today, according to the latest report made by Taipei Times, NVIDIA's next-generation of graphics cards based on "Ampere" architecture is rumored to have as much as 50% performance uplift compared to the previous generations of Turing GPUs, while using having half the power consumption.

Built using Samsung's 7 nm manufacturing node, Ampere is poised to be the new king among all future GPUs. The rumored 50% performance increase is not impossible, due to features and improvements that the new 7 nm manufacturing node brings. If utilizing the density alone, NVIDIA can extract at least 50% extra performance that is due to the use of a smaller node. However, performance should increase even further because Ampere will bring new architecture as well. Combining a new manufacturing node and new microarchitecture, Ampere will reduce power consumption in half, making for a very efficient GPU solution. We still don't know if the performance will increase mostly for ray tracing applications, or will NVIDIA put the focus on general graphics performance.

Super XPI was basing the results on UserBenchmark results. As they compare 1,000's of gaming PCs.

I don't care if it was every single PC in the whole world. Benchmarks like this are 100% useless. You need controlled test conditions, otherwise the test result is completely worthless.
I like Steve at Gamer's Nexus' comment about these pages; they are just search engine spam.
#177

That depends on the test and the conditions thereof.

Steve gets a lot of things right, but like every other human being, he doesn't know everything.
#178

lexluthermiesterThat depends on the test and the conditions thereof.

I just think he doesn't get the math. He's right if you change one word. Where he says faster it should read slower as the graphs are based on the 980ti and 1080ti. The way you are doing it is based on how much faster the faster card is over the slower card. :) 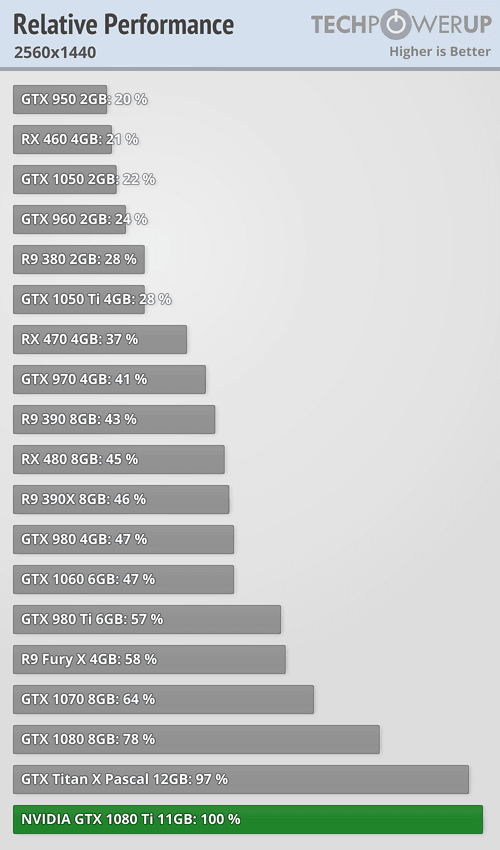 I know it takes a lot to believe amd is still competitive but what you are writing is quite a stretch even for those standards.

I do admit the GTX 1080ti is one of the bests GeForce graphics cards Nvidia released in a very long time. Not even the 2080ti can compete with how well the 1080ti was priced for the performance and the actual gain you got versus the previous 980ti. In other words, no I am not impressed with the RTX line of GPU's, and I believe many people agree with me.

Thanks for the TPU review nevertheless,..

efikkanI don't care if it was every single PC in the whole world. Benchmarks like this are 100% useless. You need controlled test conditions, otherwise the test result is completely worthless.
I like Steve at Gamer's Nexus' comment about these pages; they are just search engine spam.

I can agree with that, as controlled benchmarks would show real performance improvement differences. As with non controlled can be somewhat manipulated to show altered results.
Add your own comment
Jan 19th, 2020 09:00 EST change timezone
Sign in / Register