Update 2 by
AleksandarK
May 1st, 2020 14:38 Updated: May 3rd, 2020 08:46 Discuss (68 Comments)
The Intel Graphics Twitter account was on fire today, because they posted an update on the development of the Xe graphics processor, mentioning that samples are ready and packed up in quite an interesting package. The processor in question was discovered to be a Xe-HP GPU variant with an estimated die size of 3700 mm², which means we sure are talking about a multi-chip package here. How we concluded that it is the Xe-HP GPU, is by words of Raja Koduri, senior vice president, chief architect, general manager for Architecture, Graphics, and Software at Intel. He made a tweet, which was later deleted, that says this processor is a "baap of all", meaning "big daddy of them all" when translated from Hindi.

Mr. Koduri previously tweeted a photo of the Intel Graphics team at India, which has been working on the same "baap of all" GPU, which suggests this is a Xe-HP chip. It seems that this is not the version of the GPU made for HPC workloads (this is reserved for the Xe-HPC GPU), this model could be a direct competitor to offers like NVIDIA Quadro or AMD Radeon Pro. We can't wait to learn more about Intel's Xe GPUs, so stay tuned. Mr. Koduri has confirmed that this GPU will be used only for Data Centric applications as it is needed to "keep up with the data we are generating". He has also added that the focus for gaming GPUs is to start off with better integrated GPUs and low power chips above that, that could reach millions of users. That will be a good beginning as that will enable software preparation for possible high-performance GPUs in future.

Update May 2: changed "father" to "big daddy", as that's the better translation for "baap".
Update 2, May 3rd: The GPU is confirmed to be a Data Center component.

#1
Looks like a lot of pins on that chip, would you need that many on a consumer GPU?.
#2
I'm curious why Intel pulled the tweet...

theoneandonlymrkLooks like a lot of pins on that chip, would you need that many on a consumer GPU?.

It's unlikely that it's a consumer chip. However, it's not a far-cry from some of Intel's mobile CPU/chipset packages.
#3


It's unlikely that it's a consumer chip. However, it's not a far-cry from some of Intel's mobile CPU/chipset packages.

Hoping Intel gets into the workstation market and challenges Radeon Pro.

Although, I do love my AMD Radeon Pro card - it makes sharp lines and brilliant text. :)
#4
Looks like yet another iteration on Xeon Phi, only now in oversized LGA form-factor.
We know how well that went for Intel last time.
#5
Double A for scale
#6

Hmmm... i wonder if they're using any glue for all that scaling.
#7

AleksandarK...this processor is a "beep of all"...

pretty sure it's baap not beep, and the typo makes it sounds like a censored word :roll:
#8

Hmmm... i wonder if they're using any glue for all that scaling.

GPUs have been largely monolithic and not used any interconnects internally to date for the most part, so doubtful.
#9
It is likely comprised of four ~500mm² "Tiles" under the IHS. Not sure about HBM2e configuration. That would explain the massive size.
Obviously this is meant to be a HPC part. Good luck scaling that 4xMCM GPU on Desktop lol.
#10

XiGMAKiDpretty sure it's baap not beep, and the typo makes it sounds like a censored word :roll:

Yeah & it isn't derogatory, though in a proper context it can be ~ it's literally "Daddy" in Hindi with the word "Pita" being used for Father.

Pretty sure Xe will have the glue ~

While Intel was keen to point out that the Xe-HPC execution units can scale to 1000s of units, scaling means nothing without the right way to move data in and out of those compute engines. To that end, Intel disclosed that it has developed a memory fabric for its Xe-HPC designs called XeMF. 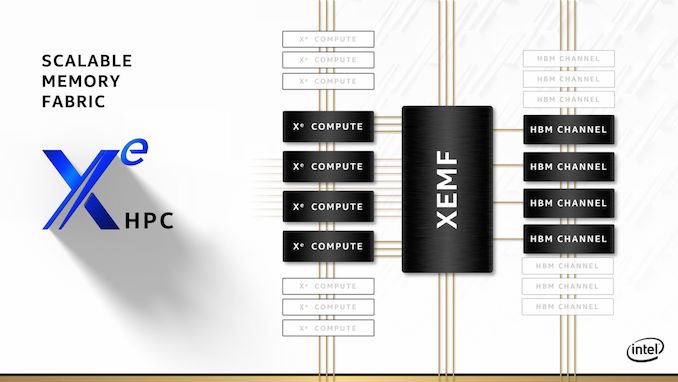 The scalable memory fabric sits between the compute units and any attached memory – in this diagram in this instance we see HBM listed. Assuming this diagram is accurate, there are few takeaways we can get from this.

Firstly, the XeMF has three connections to each Xe-HPC compute unit (XeCU), while it only has one connection to each HBM channel. That’s a 3:1 factor in bandwidth, which might be a limitation of off-silicon data transfer.

www.anandtech.com/print/15188/analyzing-intels-discrete-xe-hpc-graphics-disclosure-ponte-vecchio
#11
That's for HPC. I doubt you'll see it in consumer, but who knows.
#12
Anything that big suggests non-consumer product... Generally, it suggests a very high price, if anything.

That apart, calling stuff ridiculous names such as Rambo-cache (really?) doesn't inspire confidence, but then again - the whole Intel-at-GPU doesn't either.

Vague as a leak/tease could be, I'd rather wait this, whatever it is or meant to be, to appear in real life, with real price attached and with real benchmarks - though I doubt it's anything that will appear anywhere in next 2 years, probably more. There's, like, zero data on product - except that very vague diagram...
#13

A 3700 mm^2 die is without question impossible, that's why it's assumed to use multiple dies.
#14

Yeah but, Raja Koduri vision when working for AMD was a GPU processor for each eye. Nevertheless that's a monster.
#15
If MCM GPUs were this easy to make and have them perform well, Nvidia and AMD would be doing it... Maybe I'm being to skeptical but a part of me believes this GPU will be nothing more than a proof of concept that doesn't perform that well in real life.... Just like Rajas other works
#16
Little Hindi translation help here. While "baap" literally means "father," in vernacular terms it means "big daddy."


It's unlikely that it's a consumer chip. However, it's not a far-cry from some of Intel's mobile CPU/chipset packages.

Come on... Intel pulled a tweet? This is just normal media strategy. Here we are now talking about Intel once again. "Oops we leaked our most desired product"... haha yeah right

Intel made a headline and we are once more left speculating Xe might not be totally useless after all. And if it turns out to be hot air regardless, denial is easy to do.

Product on shelves and benched...until then its nothing.

Btw in Holland, a Baap means a fat spliff
#18

Prolly because Jim wears his black mask under his nose :laugh:

Basically useless xD
#19
Can someone provide a source for that 3700mm2 number? 'Cause that seems insane even for an MCM. Ten 370mm2 dies? Five 740mm2 ones? Either way we'd be talking about an absolutely astronomical production cost. There's no way something like that could sell for less than several thousand dollars - After all just the silicon production cost would be 5-10x any competing GPU, let alone the cost for exotic MCM packaging and so on.
#20
That's probably a nice huge GPU for compute stuff, but I just can't help it.

Edit: derp, forgot the "not" in that last parenthesis.
#22

Except you have it wrong Nvidia's in the middle.

And intel still isn't actually on the chart.
Add your own comment
Jul 2nd, 2022 13:36 EDT change timezone
Sign in / Register