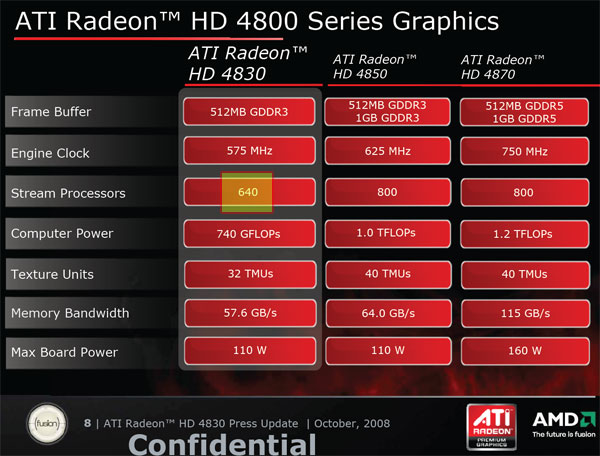 The locking mechanism relies on fuses inside the GPU, or on the substrate - a mechanism similar to Intel's multiplier locking. It is not reversible as far as I know. It is however possible to temporarily disable _additional_ fuses to reduce the shader count even further.

When I added shader count reading support to GPU-Z yesterday, I noticed some contradicting numbers. I have two HD 4830 samples here: one card from AMD, and one card from PowerColor. Both cards are reference spec HD 4830s, both are supposed to have a shader count of 640 - just like all other HD 4830 cards.

The GPU-Z readings however showed that the AMD card had 560 shaders and the PowerColor card had 640. How is that possible? If 80 shading units were missing, then this could mean a performance hit of up to 10%.

So let's try to confirm that the two cards really have different shader counts, which should be visible in the performance of these cards.

Concluding, we can see that AMD's sample card does not feature the intended shader count of 640, but comes merely with 560 shaders.

What it means for you?

So what does that mean for you, the end user?

It is unknown how many of these cards AMD sent out to reviewers, so the reviews on other sites could be affected. I only talked to one other reviewer with a HD 4830 and he had also received a 560 shader card from AMD.

Should those cards make it into retail channels you could potentially end up with a card that is quite a bit slower than intended (up to 10%). It is also unknown if only AMD's sampling is affected or if AMD board partners also sent out cards with 560 shaders.

That's why I ask all reviewers who tested the HD 4830 to download this build of GPU-Z and verify if their card really runs with 640 shaders. Until a statement is made by AMD (I notified them of course), buyers should also test their cards to verify they bought what was promised to them.

I am also 100% certain that shipping cards with 560 shaders was not intended by AMD at any time. Why should they make their own product slower?

Feel free to post the results of your own cards in the comments of this article so we can get an impression of how widespread this problem is.