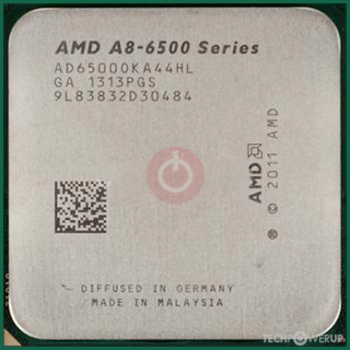 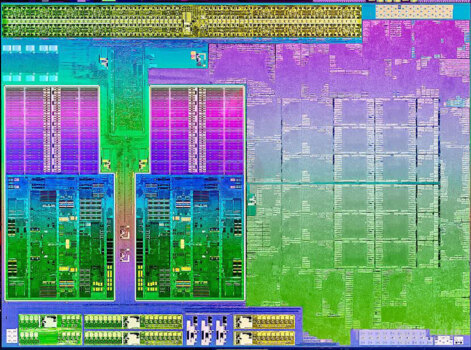 AMD Socket FM2
The AMD A8-6500B was a desktop processor with 4 cores, launched in June 2013. It is part of the A8 lineup, using the Richland architecture with Socket FM2. A8-6500B has 4MB of L2 cache and operates at 3.5 GHz by default, but can boost up to 4.1 GHz, depending on the workload. AMD is building the A8-6500B on a 32 nm production process using 1,303 million transistors. The silicon die of the chip is not fabricated at AMD, but at the foundry of GlobalFoundries. The multiplier is locked on A8-6500B, which limits its overclocking capabilities.
With a TDP of 65 W, the A8-6500B consumes typical power levels for a modern PC. AMD's processor supports DDR3 memory with a dual-channel interface. The highest officially supported memory speed is 1866 MHz, but with overclocking (and the right memory modules) you can go even higher. For communication with other components in the machine, A8-6500B uses a PCI-Express Gen 2 connection. This processor features the Radeon HD 8570D integrated graphics solution.
Hardware virtualization is available on the A8-6500B, which greatly improves virtual machine performance. Programs using Advanced Vector Extensions (AVX) will run on this processor, boosting performance for calculation-heavy applications.