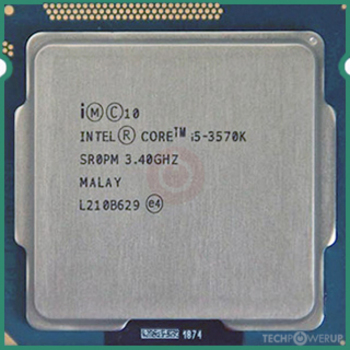 Intel Socket 1155
The Intel Core i5-3570K was a desktop processor with 4 cores, launched in April 2012. It is part of the Core i5 lineup, using the Ivy Bridge architecture with Socket 1155. Core i5-3570K has 6MB of L3 cache and operates at 3.4 GHz by default, but can boost up to 3.8 GHz, depending on the workload. Intel is building the Core i5-3570K on a 22 nm production process using 1,400 million transistors. You may freely adjust the unlocked multiplier on Core i5-3570K, which simplifies overclocking greatly, as you can easily dial in any overclocking frequency.
With a TDP of 77 W, the Core i5-3570K consumes typical power levels for a modern PC. Intel's processor supports DDR3 memory with adual-channel interface. For communication with other components in the computer, Core i5-3570K uses a PCI-Express Gen 3 connection. This processor features the Intel HD 4000 integrated graphics solution.
Hardware virtualization is available on the Core i5-3570K, which greatly improves virtual machine performance. Programs using Advanced Vector Extensions (AVX) will run on this processor, boosting performance for calculation-heavy applications.