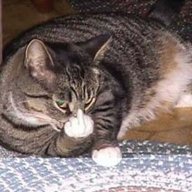 I need help, with....an interesting problem regarding my Asus Sabertooth X58.
Not sure if this is the correct forum for this, (move it please if so)
but I've looked for 2 months now for a solution regarding drivers and cleaning BIOS for ASUS SaberTooth X58.
I built my rig in 2011, and it really should be burned to hell. But I've only added a new SSD as C for more space and !2! Graphic cards. GTX 780Ti And Titan Black.

My PC works fine,
...but I've started to notice odd security issues. Like services like ISS, Web-server, Insider Services etc popping up and I couldnt get rid of em.
Then because I am paranoid, I spent weeks digging in logs to see where these come from. I cant stop remote control of my system no matter what firewalls I put up.

Long story short.
Older ASUS card are targets for attacks that injects in drivers programs and take your pick.
The X58 is a hardarse Motherboard, but it lacks protection from Meltdown and Spectre, which got remedied by a USER in ASUS community.

The problem is you can't completely flush X58 BIOS, and even if I could, I need to find every single "driver" for the motherboard installed in the system.
So far I've tried tons of antivirus scanner.....nothing.
ASUS confirms the issue but since my card is OLD, they...dont give a hut.

This is my card. I have ALL the real drivers for it. I have all the real Intel Firmware for it and I have the correct BIOS.

Has anyone heart of this? Or got any suggestions to me?
Thanks
---Kurnn, The Swedish Goth

Linked below is a database of modified BIOSes for X58 motherboards patched with the latest microcode (0x1F for Westmere, 0x1D for Bloomfield) against Meltdown and all variants of Spectre. Make sure the operating system is also updated to be fully protected from speculative execution side-channel...

AMD64 files are part of the Windows OS. Some editions of Windows come with IIS and its services preinstalled.

IIS and its related services can be removed from the control panel > programs > windows features.

If you suspect your system is infected, you run free removal tool like: McAfee Stinger, Norton Power Eraser, and HiJackThis.

You can monitor and control which apps/services can have network access with a free firewall like Windows Firewall Control or Comodo.
Last edited: Apr 10, 2020

Thank you kindly for your answer!

Comodo lasted me dec - early feb, before this came back, grrr.
There are no features to remove. I did not install them. They are not installed.
You only see them in Ccleaner, Kasperskys resque tool and event viewer. CBS.log and DISM + logs shows how someone, not me, is downgrading my system...while Im using it.

There are services running where Microsoft confirmed while connected to my PC, that they are not even allowed to be in a Win 10 HOME. Like an active Bitlocker. Active Hyper-V Server with unlimited Cores.
I was vague about the amd****.inf.
They replace the REAL motherboard driver like the Marvel 9128 SATA RAID driver, for an amd64 bluetooth-Wi-fi-TCP-IP Radio driver. I HAVE NO CLUE HOW, but this is the "line" someone uses to send out packages from my system.

Malwarebytes free service to check your windows, managed to almost get rid of these fake motherboard driver by installing fakes of their own.
Kaspares does something similar, but as soon as the motherboard sniffs internet......stuff happens while you use the puter or not.

I don't suspect my motherboard (not windows/SSD) is infected.
I know so. Confirmed by Microsoft Second line support and ASUS support.

Took 2 screenshots about 1 hour after I finished a CLEAN INSTALL of Win 10, HOME. On a brand new SSD. Installed without internet from a Media creation tool, created at a computer on another site.
Everything is like it should, until I connect to the internet and hook my Win 10 digital license signing into my Microsoft account. Which I had since 2008 (2014 upgraded to win 10).

Before I through away the motherboard, I7 CPU and RAM. And sell my bodyparts to science for a new computer, Im asking my brothers and sisters of computernerdness out there...

System Specs
i see ya have 16gb of ram in which configuration if i may ask? like 4x4gb ?
did ya run memtest ?

System Specs
It is possible the BIOS is infected, and this could possibly mean a targeted attack.
As those old Motherboards have a BIOS chip that can be swapped I would suggest that, as well as a clean install again on a fresh Hard Drive.
Once up and running, and before you connect online, disable hyperthreading, remote management, and Wake on Lan in the BIOS, and ensure you have a decent Router with a strong password set, as well as a firewall.
You must log in or register to reply here.
Share:
Facebook Twitter Reddit Pinterest Tumblr WhatsApp Email Link
Top