System Specs
Is your BIOS (Tweaker page) looking like this? 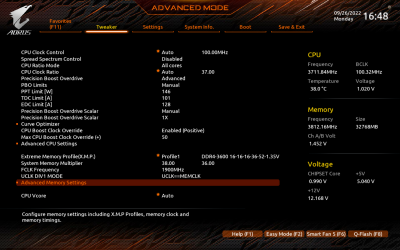 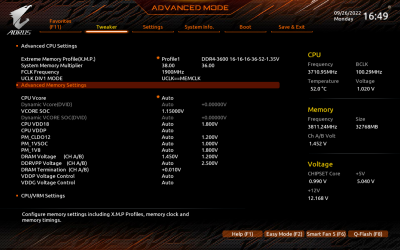 System Specs
yes it does

System Specs
Ok you go into Advanced Memory Settings >> Memory Subtimings and you find tRC and set it to 58
While you're in there you can also change
tFAW to 24 (from 38)
This is best to be at X4 of tRRDS. So 6x4=24

And most timings have the rule of multiplication of others. Those numbers are not chosen out of thin air and you cant change it to whatever.

If your RAM can take it all these (first 6 timings) could be like this:

This is without the +2 on both tRAS and tRC.
Just to give you an idea of whats going on in there.

Its better to not change too many timings together because if any instability happen you dont know which one caused it.
For now just change tRC:58 and tFAW:24

For DRAM tweaking there are 2 maybe 3 paths you can take.
1. To run speed as high as possible with XMP timing settings and maybe try to tight them a bit.
2. To run XMP speed and tight timings as much as possible
3. To find a balance between them both. Some higher speed and some tightness in timings.

Personally I prefer first because with higher DRAM speed you also get higher UCLK/FCLK speeds.
To remind you, UCLK is the memory controller speed (UMC as Unified Memory Controller) on the CPU SoC and FCLK is the Infinity Fabric (IF) speed which is the bus/interconnection of SoC with the Core dies and also between the 2 Core dies that some CPUs have (5900X/5950X)

System Specs
many thanks

Many thanks for posting this info for me. Ive been on google searching that up for months now. This will help me set my PBO properly to know what AMD expects.
P

System Specs
Why exactly? Do you hit "Del" and you dont get into BIOS?
P

paulwarden said:
tried that but it still keeps on loading to windows which means i will have to take out the battery to reset the bios and then reload everything again so it all runs as it should
Click to expand...

The "problem" is you are probably using fastboot/hibernate.

The easiest way to enter BIOS from Windows 11 is by simply holding down the shift button while you restart the computer.

Once your computer restarts, it will boot into the Windows Recovery Environment. From here, click Troubleshoot -> Advanced options -> UEFI Firmware Settings.

After hitting the ‘Restart‘ button on the next page, your computer will boot into the BIOS menu.

How to Enter BIOS in Windows 11

When you first turn on your computer, your computer loads up software stored on a memory chip inside your computer known as BIOS (basic input/output system). This software is responsible for detecting and testing your ... Read more

What was the cause of that? Fast boot?
P

System Specs
I stopped using hibernate/fastboot since I had issues with it in the past, I don't mind slower shut down or slower boot ups.
P

System Specs
i will not be using it now myself

System Specs
Right... I haven't used fast boot as I heard people having issues. And todays systems have such a fast start that a couple of secs doesn't making much sense. And its better during a system POST some at least POSTing actually be done.
POST: Power On Self Test.

Hibernate or sleep function are actually made primarily for mobile systems to reserve some energy and to be able to "wake" the system faster. I didn't had too good experience with those 15+years ago on desktop PC and I've never used them since. Today maybe they're implemented better but that is something that doesn't interest me at all.
P