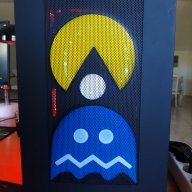 Think big and you will be great
M

Really nice! Looks like something we would see in the Smithsonian a couple hundred years later showcasing computers of the early 21st century.

Definitely a highly aesthetic build. It looks like the coolant system alone probably costs a lot more to run than the computer, monitors, and lighting combined, lol. Its a lot of coolant to move around, like 30 gallons?

System Specs
I dont even know how to rate this, its insane!