System Specs
Greetings, TPU members and random readers! It's me again with my boring projects.

I'll start with a premise, so you'll understand why I even started this stupid thing.
Recently I went through series of unfortunate events in my office (and no, I'm not talking about current pandemic).
One being a break-in, which cost me my favorite laptop and few random gadgets. The other one - unreliable office neighbors, who agreed to pitch in on surveillance system, but once I spent my blood-earned money on cams, DVR, cables and sensors for everyone - those assholes decided to "think a bit" or outright bail-out.
With barely any money left, I started thinking...

...and after quick 5-minute brainstorming session I've decided to go total overkill and build the most powerful workstation at the lowest possible budget.
In contrast to my usual PC projects, this one went completely backwards right off the start: first I bought a chassis and only then started to think about the internals.
That's because I got an absolutely bonkers killer-deal on my favorite workstation case of all time - Lenovo S20. All this beauty in nearly perfect condition, for the low-price of $4, 'cause its previous owner really didn't want to throw it away. I call it Powermac for Engineers 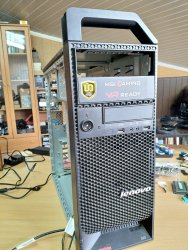 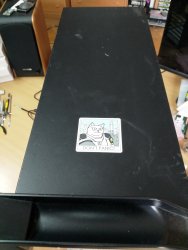 As far as bang-for-the-buck, s2011 is still the king(though 2011v3 is getting closer), so I've decided to go that route.
The only two self-imposed limitations were:
1) Only local deals, no aliexpress or any other chinese stores
2) No Huanan boards and no Xeon engineering samples. Both are shit, and if someone thinks otherwise - FU. Retail boards and CPUs only was my goal, cause I'm going to use it every day.

Got a cheap E5-2660($35), along with 4x4GB kit of DDR3-1866 RDIMM ($25 for the whole kit).
Next, I needed a board. My first idea was to try and fit Thinkstation S30 internals, but those were hard to find in decent condition(at least in my area), and they cost nearly as much as new mid-budget boards. I've decided to settle on HP Z420 as this is by far the cheapest workstation board the money can buy. All the nuances like incompatible pinouts with my case and possible PSU issues were promptly forgotten about, once I saw a $65 price tag.
Another big surprise was a cool seller: he just ran out of Z420 boards, so he shipped Z620 w/ PSU adapter and thermal sensor at no charge. It's basically the same thing, but with an additional socket for second CPU module. 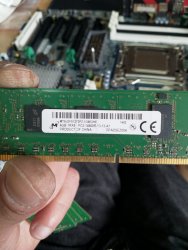 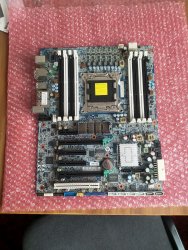 At first I wanted to use my old 950W Coolmax modular PSU, but it was too big for the side panel to close and only few power cycles later it died of old age. So, instead I spent an hour or so fixing standby rail on my old Seasonic.
As for cooling, I had a cheap chinese dual 92mm tower(supports up to 3 fans). It was supposed to go into my previously planned Ryzen rig, but fortunately it came with a bunch of brackets for other sockets, incl. s2011v1/v3.
Rated TDP is around 150W, which is more than enough for my needs. Price - only $20 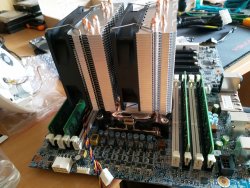 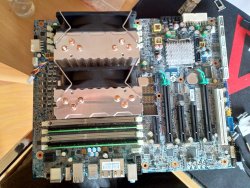 So far so good. Excluding my existing parts, I've only spent $150. I can temporarily install one of my 2TB spare HDDs, while working on SSD options.

I've got all the parts, but as you've probably noticed from the previous part that they don't quite fit together.
But where's fun in "easy". Let's fix that thing the hard way.

There is some info on HP Zx20 board layout and pinouts, but it's not complete and not always accurate, so I'll try to break down as much as I can.

MAIN POWER
First off, we need power. The hardest thing to hook up is an 18-pin main power connector, but fortunately there are some cheap adapters on the internet.
Approximate pinout looks like this:

Important things to note:
* +5V is an output from motherboard. Do not connect anything to these pins
* Skip PSU_ID and RSR_MEM_FAN_PWM. It will work without it just fine.
* Note that it uses +11VSB (marked +11V_AUX_PSU) unlike standard ATX/EPS that uses +5VSB. If you don't want to buy an adapter (or you want to rewire your existing PSU to avoid these ugly adapters), you can simply use one of those cheap adjustable boost converters from the nearest arduino shop and stick it in-line with +5VSB, adjust to output approx 11V and profit. I'm not sure what are the current/power requirements for +11VSB, but anything over 2A should be fine.
* Essentially all you need is connect +12V, -12V, GND and PS_ON, mod the standby rail to output +11V and you are good to go.

... and once again, if you have no idea what's going on, or it's too much work, then just buy a pre-made adapter for $5. I got lucky and got one for free with my board, but in the future I want to mod my seasonic to be fully compatible with Z620 with no janky adapters.

CPU/MEMORY POWER
Next is CPU/MEM PWR connector. It is pin-compatible with standard 8-pin or 4+4pin EPS connector, but there is a difference in where this power is going. One half (leftmost 4-pins) supplies power to the CPU, while the other half powers your beefy quad-channel memory. This means you can safely plug-in your standard CPU power connector from the PSU, but you must note that it's absolute maximum rating for +12V CPU rail on 4-pin connector is 192W (realistically 150W). It's still within limits even for the most power-hungry E5-2687W, but any type of overclocking is definitely out of the question.

CPU FAN
Next on our agenda is hooking up that pretty chinese CPU HSF.
There are some discrepancies on the internet about the accurate pinout of the 5-pin CPU fan connector, but one thing is for sure: it's basically a standard 4-pin PWM fan connector plus one more pin for detecting the second fan. In some sources Pin1 is marked simply as FAN DETECT, but in others it's labeled as a tachometer for the second fan. In either case, all you need is have a tach signal from the first fan, and short Pin1 to ground(Pin5) to avoid startup errors.

I've simply used one of my spare fan splitters, and modded the input: 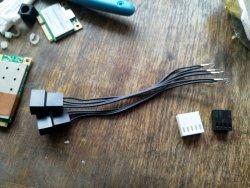 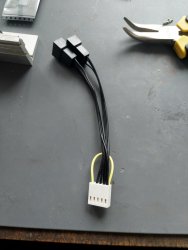 If you are using 3-pin voltage-controlled fans, then I guess you'll have to short pins 1&5 , and pin 2(PWM) to pin 3(TACH), and connect your fan to an external controller. Otherwise your only option is to run it at max RPM all the time.

That's already good enough to make this system run, but you will get a ton of startup errors, which won't go away until you hit F1.

), so let's keep going until there's no errors left for us to defeat.

FRONT FAN
Front fan is a simple PWM connector. If you aren't planning to use it, simply short pins 1 and 2 (PWM and TACH), and that solves the front fan startup error.

If you want to use only one exhaust fan, or no fans at all, then simply short corresponding PWM&TACH pins to each other. This solves the rear fan error.

Now, that's a real doozy... There's absolutely zero info on this connector, and no pinouts of the memory fan unit itself. The only clue is a fan connector from its smaller brother HP Z420, which has a regular 4-pin in it, and an unpopulated 6-pin (opposite of what we have in Z620).
So, a quick check with multimeter shows that pins 1 and 2 are power (which we don't need), and pins 3&5 are tied to PWM/TACH of the small unpopulated fan connector, which begs the assumption that it's wired similarly to a 6-pin rear fan connector and the remaining 2 pins (4 and 6) are PWM2 and TACH2, or TACH2 and sense pin.

I went with the first assumption and simply made two jumpers between pins 3&5 and 4&6. For this I happened to have a perfect connector, which I ordered by mistake a few years ago (I actually wanted 6-pin 4.2mm micro-fit connectors for GPUs, but mistakenly got 3.0mm pitch variant). All I needed to do is clip-off the latch and crimp two jumpers. 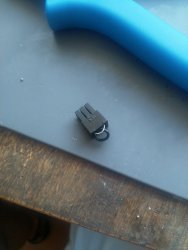 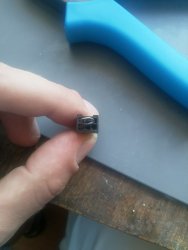 Unfortunately, much later I found out that this method only works if you have the fan mode set to low in BIOS, which means that the second assumption was correct. If I have time later on this week, I will double-check it with an oscilloscope. Most likely either PWM2 or TACH2 is actually a fan presence pin (needs to be short to ground). I'll update this post once I know for sure. For now you can use this method as a highly-questionable ghetto-workaround.

Next, we move on to peripheral connectors and front panel stuff.

TO BE CONTINUED...
P