So what do you do when the stock AMD Wraith Prism isn't your cooler of choice, but you still want the look of AMD's shiny LED fan? You bring together the best of both worlds!

I recently upgraded coolers to the massive and quiet Scythe Mugen 5 (rev B). This cooler comes with one ultra-quiet 120mm fan, but it has the needed hardware clips to add a second fan to create a push-pull arrangement. One problem, the fan from the Wraith Prism has no mounting holes to receive the spring brackets. Well, I found a rather novel solution. I didn't photograph as I went, but here are my steps if you wish to try. As usual, mod at your own risk, but this one is pretty low-skill.

Step 1: Remove the fan from the Prism assembly by carefully unclipping it along the sides--it is just held on by plastic clips that fit into the notches of the aluminum fins.
Step 2: Flip the fan unit over, and back out the 4 screws at the corners.
Step 3: Take the spring fan clips and put the corner clips in the corners of the Prism fan assembly, between the screw holes and the outer case.
Step 4: Reassemble the Prism fan, tightening the spring clips in place. Don't overtighten, just go far enough that nothing is loose so you don't get vibration.
Step 5: Install the Prism fan to the front of the Mugen 5, and move the stock 120mm fan to the rear, making sure you have it pulling air and not pushing.

Notes: There may not be enough tension in the Prism fan clips, but this can be solved by either adjust the tension of these clips by bending them back a little, or, even better, put rubber pads at the corners of the fan to reduce any vibration.

Step 6: Configure your fan speeds in your BIOS or fan software as desired. Personally, I don't let the Wraith fan ramp up beyond 1500RPM, and I connected it to a motherboard header. The stock 120mm fan remains connected to the CPU header, and I allow it to spin to 100% when needed, as it is inaudible. It works well for me that this fan is right at the rear exhaust port of my NZXT case, so the heat is dumped immediately. Results seem just fine for me. The massive heatsink is doing most of the work anyway.

Challenges:
The one issue you will have is some cable management. The RGB cable is situated on the opposite end of the fan cable, and depending on where you want the AMD logo, you may have a cable sticking out. I hid the cable with black electrical tape. You can make it out in the photos, but with the window installed, it is not noticeable. 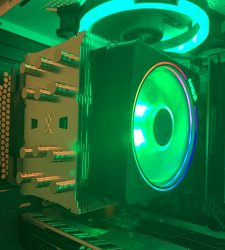 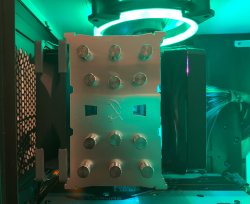 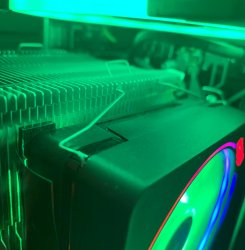 it doesn't look bad but i'm wondering... is there any real benefit to having the extra fan on there. can you post TEMPS with only the front or back fan and both of them on or swap their position to see if there is any actual benefit...

because i mean, if having the stock Mugen with single fan has your temps at 60c and putting stock in back and adding the prism fan in front has you still at 60c... there wouldn't be much point except the rgb..

Many web site's publish the Delta T data .... with stock fans as well as substitutes:

A new company is born and already they look destined to take on our performance crown. Can Phanteks really challenge the mighty Noctua and Thermalright? Read on to find out
www.vortez.net

Changing Fans is something that should be considered a risk ..... As "these guys do this for a living", one has to assume that the design team 1 of 2 things occured during the design process.:

Well probably a 3rd ... hey evaluated various fans available and put in the best ones that came closest to the design target balance of CPU Temps and noise... and then after the reviews were published, they switched to a cheaper fan. This tactic is common in the monitor industry were later productions runs have a different (cheaper) panel0.

The differences between fans on a specific cooler generally fall into three categories:

a) Increased Delta T usuyally comes via increased rpm and Increased noise
b) At same rpm, the results are usually small.
c) The results in one test can be contradicted by another tests as the specific build, OC and load will usually vary.

On the other hand, sometimes using alternate fans brings H U G E decreases in Delta T. In the example below, at the same rpm and noise levels, CPU Temps dropped by 6C when taking off the Noctua Fans off a Noctua Cooler and replacing them with Phanteks fans.

Personally, not a fan of RGB ... when I spend a couple of weeks doing a build, I'd prefer the eye to be drawn to the workmanship, not the bling bling.... but when asked by a user for the best / cheapest way to get RGB effect onto existing fans ....

1st choice - Do you have anything laying around ?

2nd choice - If you have crappy fans, buy the LED versions of something in the table at the bottom of this page:
https://silentpcreview.com/first-140-mm-fan-roundup-noctua-phanteks-xigmatek/ ...

2nd Choice - if you already have good fans- grab some LED Fan Frames like the Halos
Last edited: Aug 28, 2020

hybrid10118 said:
it doesn't look bad but i'm wondering... is there any real benefit to having the extra fan on there. can you post TEMPS with only the front or back fan and both of them on or swap their position to see if there is any actual benefit...

because i mean, if having the stock Mugen with single fan has your temps at 60c and putting stock in back and adding the prism fan in front has you still at 60c... there wouldn't be much point except the rgb..
Click to expand...

I don’t have the system around anymore to tell you, but the mod was more for decoration than for better temps. The Mugen 5 is marketed for quiet cooling versus extreme cooling, though I imagine it can handle both okay. What I found was that with the push-pull arrangement, I could set both fans to spin at the same low speeds all the time and still get good thermal management under load, so you could view that as a benefit. Ryzens aren’t much for overclocking, or at least I didn’t feel it was worth the trouble, so in this mod, it was all about quiet cooling at stock settings, while adding a little decoration and putting that Prism fan to use.