More than a flagship, the MEG Z390 GODLIKE from MSI is a statement of what the company is capable of. MSI pulled out all the stops; from the Infinity Mirror RGB LED to the M.2 PCIe expansion card, Streaming Boost capture card, and Game Boost overclocking dial: this one goes to 11, literally.

Don't fall for this crap, check youtube for the review from Buildzoid, he can't stop laughing when he reaches the conclusion part of his review no way this mobo worth 600.
R

For $600 it better come with Jesus, no offense to anyone (religious) but this price for a mainstream board is way beyond ridiculous

System Specs
I agree MSI Z390 GODLIKE that board is not worth $ 600 is actually worth 300 due to header add-ons, and does not have a PLX processor when you get it with the ASUS Z390 Worckstation board for $ 350 worth the purchase !
it's a good New Year tree !

mak1skav said:
Don't fall for this crap, check youtube for the review from Buildzoid, he can't stop laughing when he reaches the conclusion part of his review no way this mobo worth 600.
Click to expand...

I watched his video, he is obviously very knowledgeable. Which is why it is so unfortunate that the video is called a "review", since he never actually examined the board in person, didn't know all the features or what was included in the package. It's like looking at pictures of an exotic car without any of the bodywork on and saying "well, it's got a fast engine and all but why does it cost so damn much, you can get a nice car complete with bodywork for half the price".

So if we are going to say that MSI are charging way too much for the GODLIKE, let's at least do it in an informed way. The MSI Z390 GODLIKE is NOT a $600 motherboard, it is a $600 package. Before we denigrate the cost of the board we have to subtract the value of the extras. First, the Streaming Boost: about $100 for similar hardware (ie: 1080p/60fps capture). Second is the M.2 expansion: about $30 (though I admit that's a little on the high side and you can find some for cheaper). Now we are down to just the board itself costing about $470.

So now let's look at the board itself, and what extras it has that might command a premium. First there are the small details that are hard to calculate, in this category I would put the triple M.2 heatsinks, which are generally of better quality (being double sided) than you might typically see elsewhere. Next is the metal around the DIMM slots, which has to be stamped and polished. Lastly is the Dynamic Dashboard, which while not a particularly expensive part requires controlling and software, and therefor labor and development. I can't put a dollar value on any of these, and the board would of course be perfectly functional without them. That doesn't make them free, and considering the small volume of sales that can be reasonably expected for such an expensive product MSI had to build those costs in.

Lastly, audio: the GODLIKE has no less than three codecs, and while adding an additional 1220 for the front panel is likely small potatoes, the ESS E9018 Codec is a solid $100 on it's own. This isn't a workstation or extreme overclock motherboard, it's one designed for professional streamers. I do agree that adding a PLX chip would have been a good addition (a 10 gigabit networking chip would have been cool too) but it's not so much a requirement for streaming (keep in mind that multi-GPU support in games is pretty much non-existent these days).

Now, $470 (or 370 if you discount the audio) is still a huge amount for a motherboard, and if you want to argue that its too big a premium then go ahead. Just get all the information first.

Probably will be on par with the Aurorus Extreme

System Specs
So, a bunch of useless extras. Yeah....marketing fail. 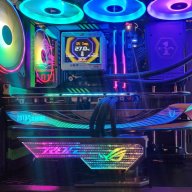 System Specs
I'm so torn about this board, the price puts it firmly into HEDT territory, and yet, as stated before it doesn't even include a PLX PCIe chip to use all those extra slots to their full potential, and would justify the price premium.

One of the slots is actually a 0x at all times, what gives? It's almost as if MSI was trying to make the board physically look like it has more features than it can actually support given its limits.

For that price I would expect at least a PCIe multiplier chip, and the ability to run two video cards at full 16x, it's been proven that RTX cards already saturate PCIe 3.0 at 8x, and AMD cards that will saturate those 8 lanes are about to be released as well.

I have had a few MSI products, and I've always been impressed with the bang you get for your buck, especially their thin laptops, but this time they really are biting way more than they can chew for that MSRP.

Thank you for the review.
J

would like to ask how many M.2 Nvme drives you can install that wont make your x16 pcie to x8 only?

asus maximus xi extreme you can only install 2x m.2 nvme on pch and if you use the dim.2 feature your x16 would only run on 8x, so max nvme drives you can install is only 2 so you don't gimp the x16 pcie for GPU, is the Godlike the same?

jlodvo said:
would like to ask how many M.2 Nvme drives you can install that wont make your x16 pcie to x8 only?

asus maximus xi extreme you can only install 2x m.2 nvme on pch and if you use the dim.2 feature your x16 would only run on 8x, so max nvme drives you can install is only 2 so you don't gimp the x16 pcie for GPU, is the Godlike the same?
Click to expand...

Digging into the manual this does not seem to be the case. The M.2 slots do share bandwidth with the PCH slot (PCIe 5 on the GODLIKE) and with the SATA and U.2 ports, but there is no indication that populating the M.2 slots has any affect on the primary PCIe x16 slot. With that said, I don't have enough M.2 drives to actually test this, and so I can't guarantee anything.

A good solution may be to pick up a PCI M.2 expansion card (like the XpanderZ that comes with the GODLIKE). They are not expensive, and should be able to run at least two drives off the PCH PCIe slot on any given board. That should leave you with at least one functional M.2 slot, if not two, without compromising PCIe lanes (though you will definitely lose some SATA ports if that matters).

Not the most concrete answer, but I hope it helps.

Edit: The two boards have pretty much identical storage controllers (the M.2 drives are powered exclusively by the Z390 chipset), so in theory they would have the same limitations.

After digging through the manual for the ASUS, I didn't find anything explicitly saying that using the dim.2 slot would cut the PCIe_1 slot bandwidth, but I haven't had my hands on the board.
If you are looking for a lot of storage, the MSI board may be a better choice. They are similarly priced, but the ASUS has 10 Gigabit LAN, and the MSI has the Streaming Boost and Xpander-Z.

The ASUS has only two M.2 slots, plus the (two I believe?) slots added with the dim.2 card. The MSI has 3 M.2 slots, plus two added with the XpanderZ. However, using all five slots in the MSI will cut your GPU bandwidth to x8 (you lose access to the PCH powered PCIe slot if you populate all three M.2 slots so you will have to use one of the two other PCIe slots for the XpanderZ which share bandwidth with the GPU). So your practical maximum with the MSI is still 4 M.2 drives.
Last edited: Nov 21, 2018

I have to agree ... have no use for youtube reviewers... but at least this guy isn't as bad as jayz2cents ... unless he's also drilled 4 holes thru his MoBo like jay did to mount a cooler. If ya can't sit down and write a review, i got no time for this nonsense.

As a flagship, it's really never going to a be a price / performance winner... it will be used for MSI to test the limits of what can be done, competitive OCers and for folks who just go thru new egg sorting by price figuring that most expensive is best. Having has my share of Rampage boards, I wouldn't buy one today either. I did love the X Power Titanium both for it's capabilities and ease of use, not to mention i wanted one to mount in a stand on my desk just so i could stare at it.

The board I would choose for upper budget board would likely be the MSI MEG Z390 ACE. Reviews so far have said 5/.1 / 5.2 a reasonable expectation and 5.3 is doable if ya get a good draw in the lottery... still we won't be doing any Z390 builds until 1Q 2019 so plenty of tim to see how the various models shake out and which will have EK support f MonoBlocks.
Z