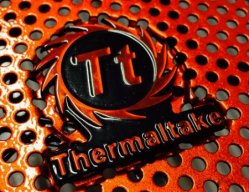 Name is Mike Fierheller, I have been an enthusiast for many years and have been working in the PC industry for 10 years. I really wanted to show something that both I would enjoy as well as show off some new liquid cooling components Thermaltake has been introducing this year from the New Pacific Series.

Thank you to my Sponsors:

First had to take a look at the chassis, see what options I had available and to be honest, I had a lot of them. I started off by stripping the case apart, I had big plans for the chassis frame and for this I had to remove every piece of plastic from it.

I then had a good friend help me locate a Chromer that could do this kind of detail work as well as the time it takes for something like this. About 1 month later, I received back my freshly chromed Core V71 Frame and the project took off from there!

While I was waiting for the frame to come back from Chrome, I had some ideas to show off the Dual SSD's I planned to install on the backpanel side and decided to go with a dimple die effect using a 1.5 in die with .25 in roll on it, here is the results.

Putting the 2 latest mods together to see what it looks like:

Moving on to the PSU, it would get a proper treatment of paint I had planed, so VOID Warranty actions must take place!

Then I had to prep and clean all the other parts for paint:

System Specs
Now for the fun part which was to lay the 3 stage HoC Candy Tangerine Paint throughout the system. I have been working alongside my best friend for over 15+ years painting/fabricating tons of parts for friends, his mentoring is how I can do what I can do today, CJ you are the best Buddy!

Here is the sample from House of Colors Site: Candy Tangerine

We laid down a Gamma Gold Base, then applied the candy on top and then cleared, here is the results:

Now I got a chance to put some of the major pieces back on the case to get an idea of what the paint and chrome would look like and start the process of wet sanding and polishing:

Moving on to the LED modifications I needed to make, I did not have a Orange Riing fan at the time, so I modified the Riing 140mm Fans with Orange LEDs as well as changing out the LEDs on my Tt eSPORTS Ventus X mouse that I just received, love the feel..

Now we move on to sleeving the PSU, for this I created a "BOSS" pattern, (Black/Orange/Silver/Silver) for the pattern on all the cables. I have not done this before, this was a first for me and I did go with paracord as I just liked the feel it had working with it better and it was much more cost effective. After separating the cables, I had to make pin-outs for all the connections and along the way my thumb did take some damage, I was told this was going to happen...

System Specs
Now we move to the radiators, I wanted to do more than just paint, so I decided to strip the paint off to the bar metal and sand/polish the rads until they came to a nice shine. Many hours of sanding was done, and about 1.5hrs on the polish wheel for each rad.

Next weekend I was getting the system ready for mock up and I had to make some adjustments before I could, mainly the top radiator. I wanted to house the top rad in the upper compartment, but it was only designed to fit fans only, well after some though on it, I was able to cut a section out of the top part of the frame so the radiator would sit flush and mount properly as well as notch the top cover to accommodate the height needed for the radiator to allow the cover to sit all the way down. Then after that was done, a rough polish was completed as this would be the last time only the frame would be exposed.

System Specs
Now we look at the motherboard, see how it fits in and start putting some parts back together to get them ready for install:

BIG shout out to Hassan @V1 Tech for the laser etching work on the PT-40-D5 for this build:

Now I wanted to do some panels, but not cover the entire inside as I wanted to keep the detail, so I looked into acrylic mirror panels that I could cut and fit for the bottom and back side of the case. This was a big part of the infinity look that I wanted once the loop was installed.

System Specs
Moving onto the Pacific LCS parts, I install the W2 CPU block, get the rads mounted with fans, GPU block install and adding some fresh sleeved cables into the chassis.


When looking for parts, sometimes you find some interesting "signs"..

Here are some night shots:

System Specs
Here is where I try bending PETG tubing for the first time. I have had plenty of experience with soft tube for personal and work related builds. I want to first determine how I wanted the flow to work out, I wrote out a directional sketch on paper and decided to go from Pump > Rad > GPUs > Rad > CPU > Res. This way the components would have rads between their cooling and I figured it was the best case scenario to take. I installed each piece having on a couple issues with some more of the multiple bend pieces, learned a lot and I think I am going PETG tube on everything forward. Once all the pieces got installed, I start the first fill, no leaks!

Here is an idea of what the infinity look is ending up like now with the mirrors exposed.

I also got to install some more power cables to the GPU and others. I had to wait to install them so I could measure and modify the cables to fit.

Some low light shots which I benched

Here is the system after leak test before I took it in to bench, still have the plastic on the window...

System Specs
Now that all the tube work was complete and leak tested, I took some time to finish up the wiring for the system and add in the custom BS Mods LED RGB lighting kit that was sent my way for the build.

Some wire management and clean up the cables.

System Specs
I love to paint and the right color is very important to me. To get a good color mixture of the Mayhems Aurora 2 Silver, I was looking to match the candy tangerine just right with a mix of Orange and Red dyes to get a nice colored coolant to complement the candy paint job.


Mayhems helped out for the project with a series of dyes and coolants.

Looks to me like this color will do, we will get it added into the system and I will have final photos with the coolant soon.

A while back I found some vintage “Sunkist” bottles online, so I picked one up and filled/capped it off with some freshly squeezed Mayhems Aurora 2 Tangerine Red.

System Specs
For the last touches I wanted to make sure I thanked my sponsors for their support. I had the logos all traced out on my wife’s machine “which I never used before lol” and cut out the logos on some black vinyl to apply to the chassis side window.

Here is how it came out on the window