Quite often when I change a setting, it locks in and won't change any further unless I reboot the computer. I can change the settings, but it will no longer have an effect according to HWMonitor or other monitors.

No matter what I seem to change on the FIVR page, it shows no voltage offset in the top right of the window (stays on Default / +0.00) and doesn't seem to lock in. I can change the ratios there though... once, and then I have to reboot before they will change again.

On the TPL window almost all settings are available. I can change power limits and it will respect it - and then it locks in, and I have to reboot to be able to change it further.


I wanted to get 4K videos playing smoothly on this processor. With the 15w limit, they play smooth for 28 seconds and then become a slideshow. With an overridden 25w limit, they play perfectly smooth, and HWMonitor reports about 22-24 watts of package power usage. So I can bump that up and let it turbo all day long, but it does increase fan noise and temperatures. I was hoping to drop the voltages about 60mv to reign in temperatures too and keep it from impacting system longevity. Any idea how I can unlock that capability?

Welcome to 2020. Intel has decided that it needs to block under volting to keep their CPUs safe. HP seems to be the first manufacturer that has added this microcode update to their laptops.

Are you using any of the Lock options within ThrottleStop? This will lock the various power limit registers. It is also possible that Intel is using a write once lock feature. This will let you set the power limits one time only and then they will be locked until the next reboot. A sleep resume cycle might also undo the lock.

Some HP owners have been able to install a previous BIOS version to get under volting back. Worth a shot if this feature is important to you. If you want to learn more about this issue, do a Google search for Plundervolt. Intel's fix is known as SA-00289.

Well that's cruddy. Do you think going back to an older BIOS would do the trick, or is this one of those microcode updates pushed out through Microsoft/Win10? Possibly nothing that I can do about it?

Just the Disable option on FIVR. All the others are unticked. Your write-once lock theory seems most likely, as the behaviour fits that perfectly? I will just assume that is what it is.

I will look up Plundervolt - thanks!

Look in the FIVR window on the right hand side for the microcode version the CPU is using. Check this before and after any changes.

You can also replace the Windows file mcupdate_GenuineIntel.dll with a previous version. This file contains the microcode update. Search C:\Windows for mcupdate and it should be able to find a previous version for you.

If you can go back and get this working, I will show you how to prevent these updates in the future.
B

That worked! v142 still allows voltage changes, v144 does not.

Download the latest drivers, firmware, and software for your HP EliteBook 840 G3 Notebook PC.This is HP’s official website that will help automatically detect and download the correct drivers free of cost for your HP Computing and Printing products for Windows and Mac operating system.

I forgot to check the microcode version before hand, but it is working normally now. I can adjust voltages and my temperature drops.

If you can go back and get this working, I will show you how to prevent these updates in the future.
Click to expand...

Should I backup one of those files in case Windows patches it, mess with the security permissions or something? Or use the Windows Update tool thing to block certain updates?

I use Sledgehammer so I can keep a close eye on what Windows updates I want.

Another trick is to take file ownership of the mcupdate_GenuineIntel.dll file away from Windows. After that, disable the Write flag so neither you nor Windows can change this file in the future.

If you need help with this, I will post some pics tomorrow.
B

Nope, I can figure the rest out by myself. That was very helpful!

Hey, can you check over my settings to see if anything is redundant or set wrong? 4K videos are playing nicely now at about 85% CPU usage. It never turbos past 2.7ghz though, unless I'm doing something like opening a web browser or office program. For 4K it just keeps it at 2.7ghz on both cores. Is that normal? It only goes as high as it needs to go?

Is there anything on the FIVR, TPL or main screens that you'd recommend changing?

The Multiplier setting on the main screen doesn't seem to do much? What does the Non Turbo Ratio do on FIVR? Now that I have more power headroom, I could set two cores to turbo to 34x?

The maximum multipliers for the 6600U are 34 when 1 core is active and 32 when 2 cores are active. Changing this setting in ThrottleStop will not do anything so leave it as is. This is a limitation of this CPU. Some adjusters were left unlocked in ThrottleStop for experimentation purposes.

The newer beta versions of ThrottleStop will show a hint in the Turbo Ratio Limits area what the default maximum turbo multipliers are.

You have the Speed Shift EPP variable set to 128 on the main screen. Click on this value and you can change it. Setting EPP (Energy Performance Preference) to 0 will get you maximum performance. If you want the CPU to slow down when lightly loaded, I would try setting EPP to 80. I like a fast CPU when plugged in so I leave this at 0. The default setting of 128 may limit maximum performance.

When using Speed Shift, I do not think the Non Turbo Ratio is used so I would leave that at its default setting.

For voltages, usually the CPU Core and CPU Cache should be adjusted equally and for the Intel GPU, you should be adjusting the Intel GPU and iGPU Unslice voltage offsets equally. I would concentrate on the core and the cache first and leave everything else left at an offset of 0.0000. The core and cache are the important ones. Once you know how much voltage the CPU needs to run stable, then you can play with the other voltage adjusters.

For the PP0 Current Limit, I think a setting of 0 tells the CPU to use a default value for this setting. I would set this to 100 just to make sure that it does not interfere with performance.

I have never found a need to check BD PROCHOT. Open up Limit Reasons and see if this throttling method is being used. Some laptops use this excessively so I usually clear this box.

Use the TS Bench to stress test your CPU. While that test is running, open up the Limit Reasons window and see if anything is lighting up in red. This info will help guide you (or me) on what needs to be tweaked. You seem to have lots of temperature headroom so might as well see if you can get some more performance out of your laptop. Post some pics while stress testing is in progress.

Some of the low power U CPUs are locked down by manufacturers but sometimes you get lucky and find out that they can be operated well beyond their 15 Watt TDP rating. I have had good success going beyond the TDP limits with both 7th and 8th Gen U CPUs.

Roger - adjusted the turbo multipliers back.

Okay, so speedshift numbers are from 0 to 255? On wall power, I will set it to zero. On battery, I want maximum battery life. 128 is good?

Although I have temperature headroom, I am fine keeping wattage under 25C and temps and fan noise low. I prefer longevity to eeking out that final gain. Plus, on battery the SOC seems to hard cap to 10 watts nomatter the setting. I haven't been able to get it to go above that in HWMonitor. So I might need very different tweaks/settings for on-battery usage. On wall power it seems to allow whatever setting I want, even as high as 35 watts, although I changed it back to 25w since I wasn't confortable with that.

BD PROCHOT was ticked by default. Untick it? No sign of it in the limits window. It was all PL1 and PL2 before, for GPU and Core. EDP Other on all three.

Default non-turbo-ratio was 25 for some reason, while my CPU's multiplier is 26x? I can change it all the way to 28 and it will take. Above that nothing seems to happen?

I did a stability test overnight with these settings. It worked fine until I stopped it. It shifted back to lower mhz, but about 45 seconds later when I tried to save OCCT's results, it hard locked. Is that from the System Agent voltage drop? I should fully eliminate that? I did manage to get the screenshot saved before the freeze. 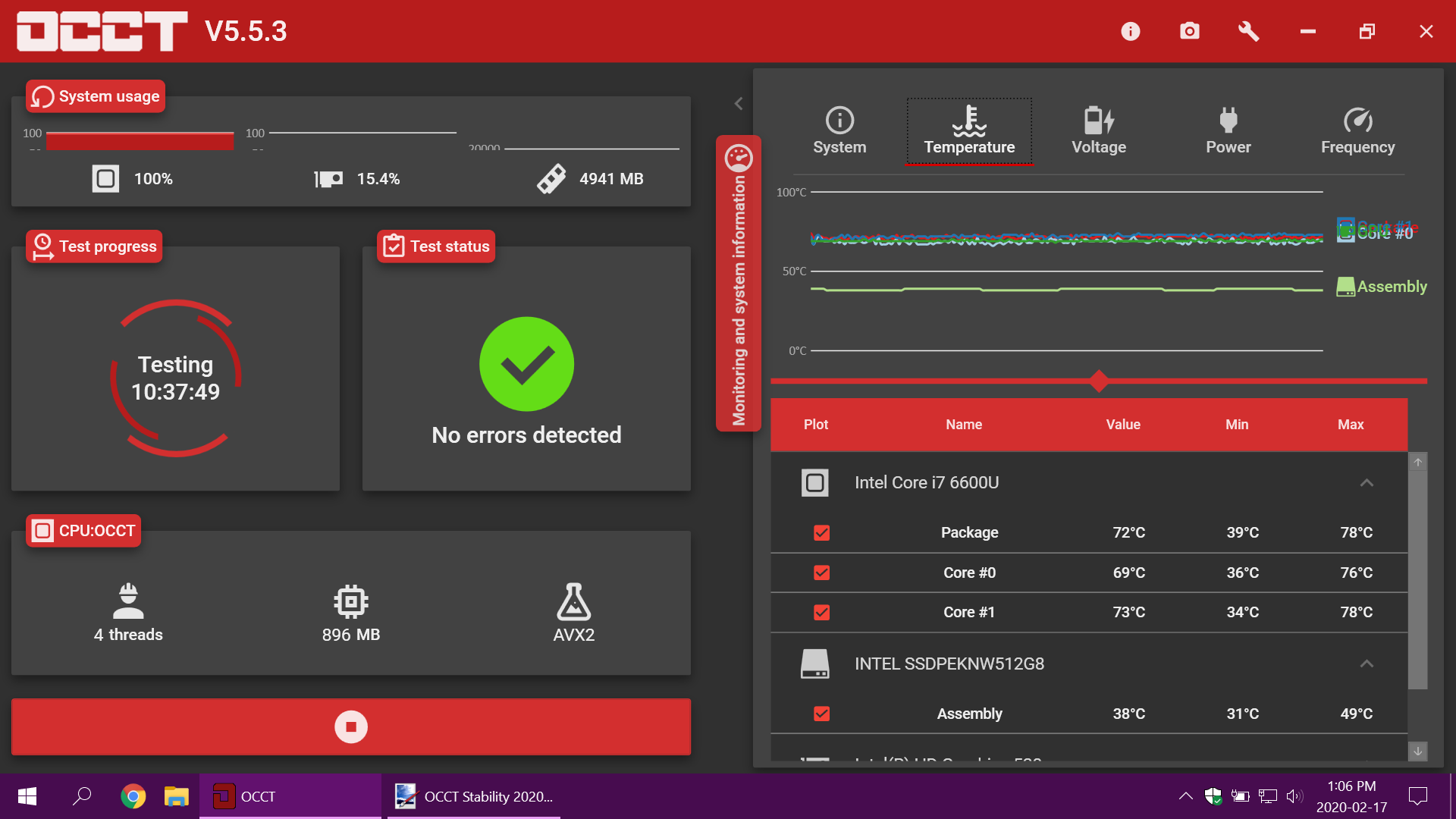 My system appears to be unstable around -70 to -85mv CPU. Wondering if I should try -60mv in case the freeze wasn't system agent, but rather cpu volts? 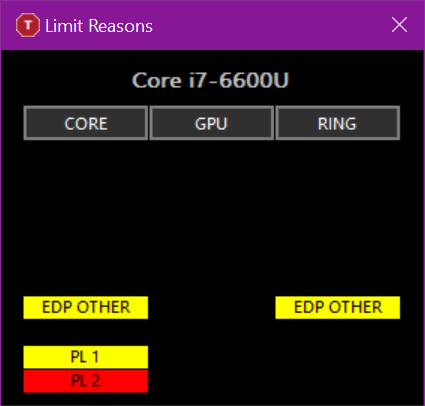 I think an EPP setting of 128 is a good compromise when running on battery power. Do some testing. See what works best for you. Keep in mind that a fast CPU is an efficient CPU. No need to tie it to a tree at 500 MHz or 800 MHz.

If BD PROCHOT is not causing any throttling problems, you can leave this checked.

I do not think the non turbo ratio is used when Speed Shift is enabled.

A CPU that works fine at full load but freezes when idle or lightly loaded is usually a good sign that the CPU needs some more voltage. Full load testing is OK but you also need to do some single thread testing. Either a 1 Thread TS Bench 1024M test or maybe 1 thread of Prime95.

Concentrate on the core and cache and leave the other voltages at 0.0000 offset. Spend a week using your laptop normally. One freeze is one too many.
B

unclewebb said:
I think an EPP setting of 128 is a good compromise when running on battery power. Do some testing. See what works best for you. Keep in mind that a fast CPU is an efficient CPU. No need to tie it to a tree at 500 MHz or 800 MHz.
Click to expand...

Thanks. I'll play around with it.


unclewebb said:
If BD PROCHOT is not causing any throttling problems, you can leave this checked.
Click to expand...

It did come up when on battery, but never when wired in. It seems to have a 10w limit on battery.


unclewebb said:
A CPU that works fine at full load but freezes when idle or lightly loaded is usually a good sign that the CPU needs some more voltage. Full load testing is OK but you also need to do some single thread testing. Either a 1 Thread TS Bench 1024M test or maybe 1 thread of Prime95.
Click to expand...