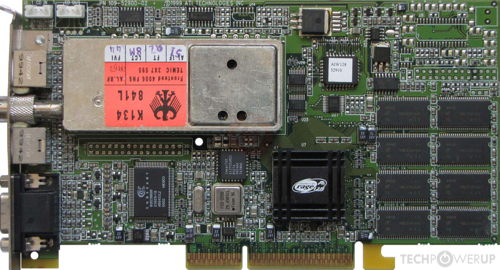 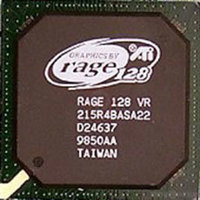 The All-In-Wonder 128 was a graphics card by ATI, launched in June 1999. Built on the 250 nm process, and based on the Rage 4 graphics processor, the card supports DirectX 6.0. Since All-In-Wonder 128 does not support DirectX 11 or DirectX 12, it might not be able to run all the latest games. The Rage 4 graphics processor is a relatively small chip with a die area of only 89 mm² and 8 million transistors. It features 2 pixel shaders and 0 vertex shaders, 2 texture mapping units, and 2 ROPs. Due to the lack of unified shaders you will not be able to run recent games at all (which require unified shader/DX10+ support). ATI has paired 32 MB SDR memory with the All-In-Wonder 128, which are connected using a 128-bit memory interface. The GPU is operating at a frequency of 90 MHz, memory is running at 90 MHz.
Being a single-slot card, the ATI All-In-Wonder 128 does not require any additional power connector, its power draw is not exactly known. Display outputs include: 1x VGA, 2x S-Video. All-In-Wonder 128 is connected to the rest of the system using an AGP 4x interface.

Reviews
3 in our database