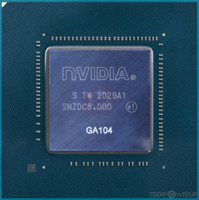 The GeForce RTX 3070 Mobile is a mobile graphics chip by NVIDIA, launched on January 12th, 2021. Built on the 8 nm process, and based on the GA104 graphics processor, in its GA104-770-A1 variant, the chip supports DirectX 12 Ultimate. This ensures that all modern games will run on GeForce RTX 3070 Mobile. Additionally, the DirectX 12 Ultimate capability guarantees support for hardware-raytracing, variable-rate shading and more, in upcoming video games. The GA104 graphics processor is a large chip with a die area of 392 mm² and 17,400 million transistors. Unlike the fully unlocked GeForce RTX 3070 Ti, which uses the same GPU but has all 6144 shaders enabled, NVIDIA has disabled some shading units on the GeForce RTX 3070 Mobile to reach the product's target shader count. It features 5120 shading units, 160 texture mapping units, and 80 ROPs. Also included are 160 tensor cores which help improve the speed of machine learning applications. The card also has 40 raytracing acceleration cores. NVIDIA has paired 8 GB GDDR6 memory with the GeForce RTX 3070 Mobile, which are connected using a 256-bit memory interface. The GPU is operating at a frequency of 1110 MHz, which can be boosted up to 1560 MHz, memory is running at 1750 MHz (14 Gbps effective).
Its power draw is rated at 115 W maximum. This device has no display connectivity, as it is not designed to have monitors connected to it. Rather it is intended for use in laptop/notebooks and will use the output of the host mobile device. GeForce RTX 3070 Mobile is connected to the rest of the system using a PCI-Express 4.0 x16 interface.

Retail boards based on this design (2)