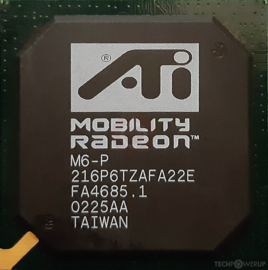 The Mobility Radeon-P was a graphics card by ATI, launched in December 2001. Built on the 180 nm process, and based on the M6 graphics processor, in its M6-C32 variant, the card supports DirectX 7.0. The M6 graphics processor is an average sized chip with a die area of 115 mm² and 30 million transistors. It features 1 pixel shaders and 0 vertex shaders, 3 texture mapping units and 1 ROPs. Due to the lack of unified shaders you will not be able to run recent games at all (which require unified shader/DX10+ support). ATI has placed 32 MB DDR memory on the card, which are connected using a 64-bit memory interface. The GPU is operating at a frequency of 166 MHz, memory is running at 166 MHz.
Being a igp card, its power draw is not exactly known. This device has no display connectivity, as it is not designed to have monitors connected to it. Mobility Radeon-P is connected to the rest of the system using an AGP 4x interface.