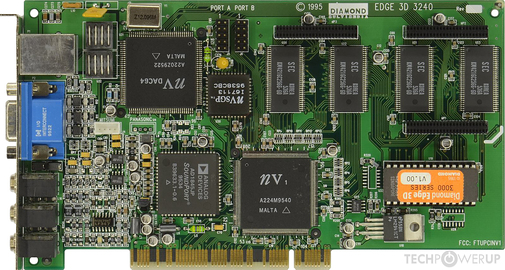 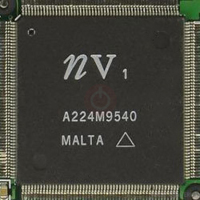 The NV1 was a performance graphics card by NVIDIA, launched in September 1995. Built on the 500 nm process, and based on the NV1 graphics processor, the card supports DirectX 1.0. The NV1 graphics processor is a relatively small chip with a die area of only 90 mm² and 1 million transistors. It features 1 pixel shaders and 0 vertex shaders, 1 texture mapping units and 1 ROPs. Due to the lack of unified shaders you will not be able to run recent games at all (which require unified shader/DX10+ support). NVIDIA has placed 2 MB EDO memory on the card, which are connected using a 64-bit memory interface. The GPU is operating at a frequency of 75 MHz, memory is running at 60 MHz.
Being a single-slot card, the NVIDIA NV1 does not require any additional power connector, its power draw is rated at 2 W maximum. Display outputs include: 1x VGA. NV1 is connected to the rest of the system using a PCI interface. The card measures 191 mm in length, and features a single-slot cooling solution. Its price at launch was 299 US Dollars.

Retail boards based on this design (2)