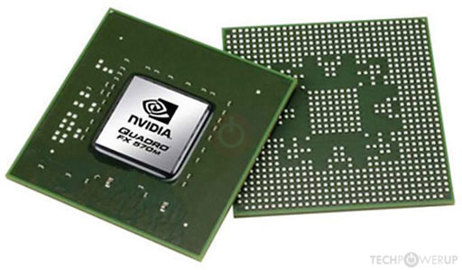 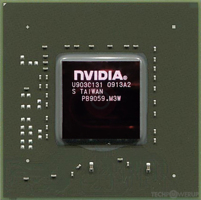 The Quadro FX 570M was a professional mobile graphics chip by NVIDIA, launched on June 1st, 2007. Built on the 80 nm process, and based on the G84 graphics processor, in its NB8P-GL variant, the chip supports DirectX 11.1. Even though it supports DirectX 11, the feature level is only 10_0, which can be problematic with many DirectX 11 & DirectX 12 titles. The G84 graphics processor is an average sized chip with a die area of 169 mm² and 289 million transistors. It features 32 shading units, 16 texture mapping units, and 8 ROPs. NVIDIA has paired 512 MB GDDR3 memory with the Quadro FX 570M, which are connected using a 128-bit memory interface. The GPU is operating at a frequency of 475 MHz, memory is running at 700 MHz.
Its power draw is rated at 45 W maximum. This device has no display connectivity, as it is not designed to have monitors connected to it. Rather it is intended for use in laptop/notebooks and will use the output of the host mobile device. Quadro FX 570M is connected to the rest of the system using a PCI-Express 1.0 x16 interface.