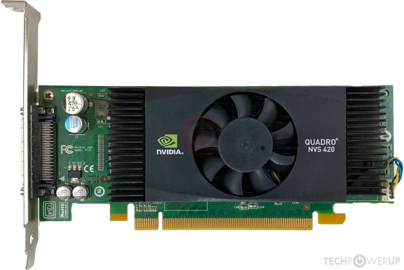 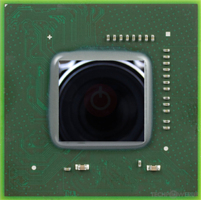 The Quadro NVS 420 was a professional graphics card by NVIDIA, launched in January 2009. Built on the 65 nm process, and based on the G98 graphics processor, the card supports DirectX 11.1. Even though it supports DirectX 11, the feature level is only 10_0, which can be problematic with many DirectX 11 & DirectX 12 titles. The G98 graphics processor is a relatively small chip with a die area of only 86 mm² and 210 million transistors. Quadro NVS 420 combines two graphics processors to increase performance. It features 8 shading units, 4 texture mapping units, and 4 ROPs, per GPU. NVIDIA has paired 512 MB GDDR3 memory with the Quadro NVS 420, which are connected using a 64-bit memory interface per GPU (each GPU manages 256 MB). The GPU is operating at a frequency of 550 MHz, memory is running at 700 MHz.
Being a single-slot card, the NVIDIA Quadro NVS 420 does not require any additional power connector, its power draw is rated at 40 W maximum. This device has no display connectivity, as it is not designed to have monitors connected to it. Quadro NVS 420 is connected to the rest of the system using a PCI-Express 1.0 x16 interface.