System Specs
@Zach_01 for some reason I read 5800X lol. So what do you think about my screenshots? Should I keep it like that? Or try to tune it more? Like I said before I'm using the pc for VMs and some heavy gaming. Do you think moving to a 360mm radiator from a 240mm would help?

As for the AIO, not too much I would say, on the same ambient/case conditions. It would probably improve temp by a little but not so much that can justify the cost of it and the potential performance gains, if there is any.

It’s not like going from conventional cooling (air/water) that always rely on ambient temp, to a sub-zero cooler, like a chiller.

juanyunis said:
@bubbleawsome does your reach more than 1.5V? Or close like 1.498V? What is your motherboard? If you are running everything stock at the moment you can try enabling PBO in advanced mode and put some initial values, if your processor is 65W TDP then maybe you can try running PPT at 220, TDC/EDC at 120 and the curve -15, scalar auto and platform thermal auto, max boost at 0.

The motherboard is the MSI MEG Unify, and ryzen master and HWinfo say it's running right about 1.485v but HWinfo CPU Core Current (Effective) goes up to 1.500v sometimes. I tend to get errors going over about -10 in the voltage curve.

Zach_01 said:
The second is the one with max load, on the last was already finished.


Sounds about right... As for what is the best EDC value has no straight answer. It depends, mostly on temp.
From my understanding, using the curve optimizer with custom PBO limits you are by passing some of the protection of the chip. Mostly on current. It should be used with care and awareness of what is what. Temperature is an indication of stress but doesn’t tell the whole story. EDC too.

For example (and I’m going to use random numbers) having EDC, let’s say 140A at 70C is ok, but having 140A at 90C is not. The speed or voltage at those 2 cases is less significant but still play a role.
Same applies to every EDC value. It’s the combination of current(A), voltage and temp.

Keep temperature as far as possible from max operating limit (95C), under 80C I would suggest, EDC in reasonable levels (120~130) and all other (voltage, speed, watt) will fall were they should.

I’m not afraid of the 1.45-1.5V on single thread, nor the 200W PPT on multi.
It’s the high temp/EDC combination that can tear the chip’s internal traces rather quickly.

I believe those are

I'll keep that in mind and try out those PBO limits. I'd like to say it never ever goes over 80c with the dark rock pro 4 I've got on there, but once the case heats up CCD1 can reach towards 85c as is. I don't think I've ever seen it pass 85c though no matter what I'm doing.
M

bubbleawsome said:
The motherboard is the MSI MEG Unify, and ryzen master and HWinfo say it's running right about 1.485v
Click to expand...

What is up with the voltage? MSI takes the high load as primary, so you might want to consider 1.25v as the maximum.

mtcn77 said:
What is up with the voltage? MSI takes the high load as primary, so you might want to consider 1.25v as the maximum.
Click to expand...

That is with a single core load, under 24-thread loads it's down as low as 1.114v. I'll do a quick average while gaming and see where it's trending.
M

bubbleawsome said:
I'll do a quick average while gaming and see where it's trending.
Click to expand...

It would be better if you checked how much ST heats up the working core. Don't encroach upon TjMax too much.

mtcn77 said:
It would be better if you checked how much ST heats up the working core. Don't encroach upon TjMax too much.
Click to expand...

The highest I've ever seen on either CCD even with the case and room as warm as they get is 87c on CCD1. Since then I've done some tuning and never seen it that hot again. Under the gaming I've just done the hottest it got was 80.0c, with the measured TDC and EDC maxing out in the high 50A range, voltage maxing at 1.49 effective but averaging 1.43 effective. Not sure what the difference is between voltage and voltage effective
M

bubbleawsome said:
Not sure what the difference is between voltage and voltage effective
Click to expand...

Probably vdroop.
What I recon is, this power optimizer does not sit well with overvolting.
I thought I could explain it using the boost bins if it were applying overvoltage at the highest bin, therefore dropping the lower bins to an undervolted setting, but there is no precedence AMD could setup such a novelty. If it had been, that would be great, overclocking just the highest bin setting, that is.

The power supply system cannot supply individual core voltages, only one voltage can be supplied to the CCDs (1 or 2)
So...

"CPU Core VID (effective)" is the one and only voltage request by the CPU. But that is not what the CPU is getting. Its only a request.
"Vcore" is what the board reports for CPU voltage by its own(board) sensor.
"VR OUT" is what the VRM reports for CPU voltage by its own(VRM) sensor.
"CPU Core Voltage (SVI2 TFN)" is what actually, or as closest as possible, the CPU is getting and it is read internally (in CPU).

According to HWiNFO author the SVI2 TFN is the most accurate and close to the true value that the CPU is getting. I've write it before a few posts back.

I have red box all these voltage sensors for easy location 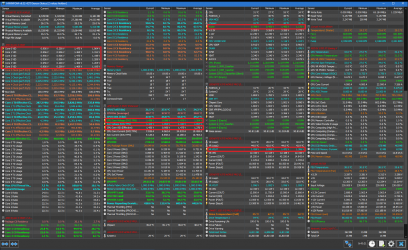 Also, Ryzen CPUs do not have dedicated temp report of each core like Intels. They do have a few dozen sensors per CCD though. Instead of reporting dedicated (static) core sensors, they report the "Tctl/Tdie" which is the hotest spot inside all package (CCD1, CCD2, IOD). This one is switching between all package sensors (could be over 100) almost instantly and report always the highest one.
The "Die (average)" temp is the average of all package sensors or only of all CCD1/2 sensors.
The "CCD1, CCD2 (Tdie)" is from a dedicated(static) sensor located on one side of each CCD.

When the CPU is fully loaded all 4 values should be around the same as heat is destributed almost equally to all die area. When load is light or medium (like gaming) these values are different as not all parts of the CPU is loaded equally.

System Specs
Ah, very useful. In that case I'm seeing SVI2 at 1.49 is the highest it's ever been, usually closer to 1.47. Tctl/Tdie is maxing right under 80, CCD1 tends about 2-4c hotter than CCD2 even under multicore. I figure that's due to the leakier cores being on that one

bubbleawsome said:
Ah, very useful. In that case I'm seeing SVI2 at 1.49 is the highest it's ever been, usually closer to 1.47. Tctl/Tdie is maxing right under 80, CCD1 tends about 2-4c hotter than CCD2 even under multicore. I figure that's due to the leakier cores being on that one
Click to expand...

The higher perf #x/x cores should have higher average values on the above 4 multiple readings.
Check all those under various loads and see if the high performance cores are getting the most load.
Last edited: Jan 10, 2021 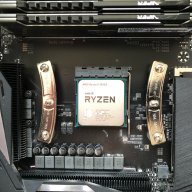 will do some testing on above settings and try to tweak them - curve settings is stil as shown above
Last edited: Jan 10, 2021

But here the multicore performance in the CPU-Z benchmark is stil beneath 4125MHz - but tempc stay under 60c
Click to expand...

Did you really wanted those PBO settings?
Stock are this

Did you accidentally confuse EDC with TDC and wanted them like this?

System Specs
@jesdals i think you found a pretty sweet spot already, you still reach 5ghz boost, no clock stretching voltage lower than 1.5V and temperatures are less than 80C., . It makes me want to try it now.

What scores you got for cpu-z ST/MT. Have you changed any other bios settings? Are you still using turbo for LLC and Auto voltage for cpu core?

jesdals said:
Still stability testing but got this CPU-Z bench result - not to shabby

Is this with your latest settings? Also, I asked you if you wanted any other bios settings like voltage etc. It looks pretty good, do you have cinebench?
M

The thing is, you won't lose performance should you decrease these settings. We still have the temperature going for us. So, if you were to decrease EDC somewhat, MT scores would start to pick up since it would redirect power to more stable workloads(PPT). You should definitely chart it out starting from a very throttled setting up to where you want to be. Keep PPT there and just advance EDC in increments, maybe 5-10A each time. If you get to a point where MT core average crests over, do the other curve optimizer stuff alongside it. Just don't leave it to doubt.

juanyunis said:
Is this with your latest settings? Also, I asked you if you wanted any other bios settings like voltage etc. It looks pretty good, do you have cinebench?
Click to expand...

My Loadline settings is the same above in previous test

Will test this some more and try setting scalar to auto next
Last edited: Jan 10, 2021
J

System Specs
@jesdals thank you for the settings. I was able to tweak a little bit more to get more performance.

System Specs
I believe there is a reason why TDC by default is lower than EDC. Take a look the descriptions of each PB limit

Just some food for thoughts

This article by GN is over a year old and was for Zen2 but I dont think anything has changed to Zen3 for the general principles of the chips.

System Specs
@Zach_01 thank you for your thoughts. They are very helpful. I will try playing with different bues for TDC and EDC. It does make sense. 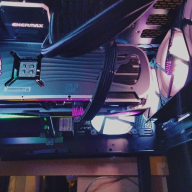 System Specs
Well, I think I have something nice, I know you guys won't like it @mtcn77 and @Zach_01 but haha this is the best I have ever achieved, I ran AIDA stability test for about 6 hours without any issue.

juanyunis said:
Well, I think I have something nice, I know you guys won't like it @mtcn77 and @Zach_01 but haha this is the best I have ever achieved, I ran AIDA stability test for about 6 hours without any issue.

Give it a go