Good evening, I am hoping someone can help with me an issue I'm having that has me at my wits end on what I can possibly to do get the Vram temps of my Zotac Trinity 3090 under control. (As I'm at work I'm limited for info I can provide but here goes)

In the hopes of getting my Zotac temps down I have followed various write ups and completed the following mods:
1) Deshrouding.
2) Adding 2x120mm Noctua AF fans
3) Changing thermal pads - Fujipoly 2mm
4) New thermal paste - MX4
5) Take side panel off

I first used NiceHash (simple to use) and my temps crept over 102 no matter what settings (light/medium/extreme). I was using via MSI Afterburner as well. Originally the fans were plugged into a 4pin motherboard header however I have since picked up a VGA to PWM cable so the two fans are linked together via a splitter and plugged into the graphics card.

Nicehash seemed to always override the fan curve of MSI Afterburner so I switched to T-Rex miner and was able to have the fans blow at 100% continuously. Through some MSI Afterburner tweaking I was able to get a 92-94 temp but only pushing out 80 megahash.

For MSI Afterburner settings I was using various ones located through reddit and youtube as I'm not too savy with overclocking/undervolting.

In the near future I would like to get a dedicated mining rig rather than trying to use my gaming PC but first I'd like to get the card working as it should so I know I should invest in a small mining rig ( I have two other graphics cards for mining so a mining rig will be required down the line ).

I would appreciate any and all help/suggestions. Thank you for your time in advance.

System Specs
The only thing that worked for me was underclocking the VRAM, and eventually going full water

you may have the wrong size thermal pads, or may just need more heatsink on the back of the card? 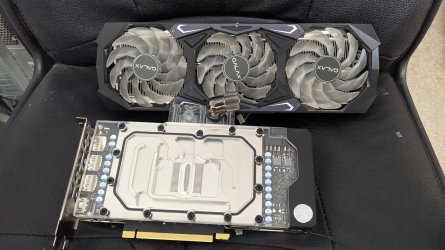 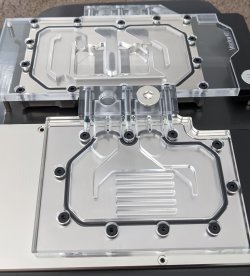 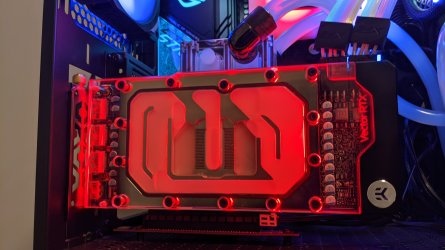 System Specs
i have two 3080 cards different makes one runs fine one is a thermal disaster.. i have added pads between the backplate and boards and done pretty everything i can to keep the memory temps down below the throttle point of 110 C..

my dodgy card is in an open air rig with an extra fan blowing at the backplate and on a moderately warm day is showing 106 C.. the good unmodified card is in a normal desktop machine and shows 96 C..

System Specs
Thats the thing with GDDR6X...
The power draw is humongous, more than double, compared to "plain" GDDR6 and on top of that, 3090s have more modules and on both sides of the PCB. Not an easy task (actually is a pain) to cool 3090s without water and/or a backside heatsink. In addition the GPU VRAM controller for GDDR6X is also complex and maybe contributes to overall heat negatively.
3060s/3070s have GDDR6(non X) modules like Navi1/2 does, so its pretty easy to cool them.
D

Zach_01 said:
Thats the thing with GDDR6X...
The power draw is humongous, more than double, compared to "plain" GDDR6 and on top of that, 3090s have more modules and on both sides of the PCB. Not an easy task (actually is a pain) to cool 3090s without water and/or a backside heatsink. In addition the GPU VRAM controller for GDDR6X is also complex and maybe contributes to overall heat negatively.
3060s/3070s have GDDR6(non X) modules like Navi1/2 does, so its pretty easy to cool them.
Click to expand...

Yup I`m at my wits end too with my 3090 X Suprim, I have EK vector trio water block and the EK backplate on mine ,After 10 mins you cant touch the back plate,
Just wish they did a they did an active backplate for msi suprim 3090

Thank you everyone for your quick replies. I'm finally on days off and am trying to tackle this issue once more.
I've decided to try to take the GPU out of my gaming rig and have it run off a powered riser. Thought pattern is maybe even with the side case the heat from the rear panel is just not going anywhere because it backs up onto my CPU cooler with very little room.

So now I have another issue. My 2080ti is installed in the #1 GPU slot on my motherboard and the riser is plugged into a pcie x1 slot. I have the riser powered by a 6 pin connector and when I turn my PC on the riser lights up with both LEDs which is meant to signify that everything is working. The first issue was the PC wouldn't load. I got an error saying no operating system found. I also noticed the fans weren't spinning on the 3090. This could be as the card didn't get up to temp that they'd turn on yet or simple the PC was having issues with it. Regardless my PC wouldn't boot up. A little research later says that the PCIE slot has to be forced through BIOS to gen 3 pcie vs auto/gen4. My bios didn't give me an option for gen 4 anyway so I forced gen 3. With the 3090 out of the system loop I was able to boot up however even with forced gen 3 pcie and the 3090 back in the loop my system won't load.

Anyone have any thoughts as to where my issue is? I'm getting really frustrated with this issue and am trying not to dump more money (buy standalone motherboard/hdd/ram/cpu/cooler) to get try to see if this card's temps can be tamed. I don't want to keep dumping money into a problem when I should have the tools on hand to get it working.

Again my thanks for taking the time to read this and hopefully offer some suggestions. (water is out of the question).


Mussels said:
The only thing that worked for me was underclocking the VRAM, and eventually going full water

you may have the wrong size thermal pads, or may just need more heatsink on the back of the card?
Click to expand...

I will be looking into available heatsinks for sure, unfortunately a new problem has risen (see above) so for the moment I'm at a standstill.

System Specs
Is your OS installed on NVMe SSD or SATA SSD?
I think the X1 slot you're using disables the OS drive. I believe is a SATA SSD?
Check the manual. Some PCI-E slots are not directly linked to CPU but going through the board's hub. The chipset. So under certain configurations (populated PCI-E slots) some SATA ports are disabled.

I didn't understand this part:
"My 2080ti is installed in the #1 GPU slot on my motherboard and the riser is plugged into a pcie x1 slot."

Take a note that using a riser card for the GPU it will render it useless for games. It will constantly work as X1 and not X16.

EDIT:
The same thing can happen with some m.2 slots. They are going through the chipset. So they can be disabled if some PCI-E slots are populated.
P

Thank you so much for the insight on this. I will check other pcie configurations and my manual right away!

System Specs
Try the X1 above the 2080Ti

Is the drive on the first or second m.2 slot?

System Specs
For your temp issues. Lower your core clock and vcore by using the curve editor in afterburner. I think it should be around 1100-1200 mhz at the lowest voltage then lock it there so thay it wont jump around.

The core and the memory shares the same heatsink. If the core is soaking the heatsink that wont leave room for the vram. Also make sure that the vram chip underneath the backplate has some decent thermal pads. Put a tiny heatsink to it and a fan if you can.
P

Okay.. update. Apologies it took awhile. Had to find another 6pin cable. Rule #1 don't work on computers when tired. Issue #1 of fans not working on the 3090 is solved...I had to actually power the card not just the riser. *sheesh*.

2080ti plugged into first x16 spot. 3090 plugged into riser. Riser plugged into the first x1 slot above the 2080ti. I got the same error of no operating system found but when I pressed enter windows loaded anyway and device manager sees my 3090. Fans are spinning.

PDribbles said:
I had to actually power the card not just the riser. *sheesh*.
Click to expand...

I did thought about it but forgot to mention it...

So does the manual refer to PCI-E/m.2/SATA configurations?
Is your drive on the second(bottom) m.2 slot?

The m.2 is located in the first spot (with thermal guard)

System Specs
That info tells you what you need to know (and can verify easier than us) - that some PCI-E ports disable other devices, or lower NVME bandwidth 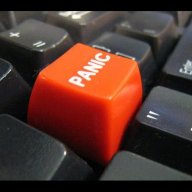 Howdy folks - Daily update. A huge shout out to everyone that helped me with this issued through this thread. Major points to Zach_01 who took the time to help me out through the various steps as well.
Got everything sorted out which is great and even managed to get my temps in check. For anyone that finds this thread this is what I did with my Zotac 3090 Trinity (recap)

De-shrouded
New thermal pads - Fujipoly2mm
2x Noctua 120 AF fans on the front side venting in
New thermal paste (MX4)
1x Noctua 120 Af fan on the back plate side aimed in a way that puts cold air onto the backplate but also pushes it away (ie: angled)

Using nicehash quickminer I have the 3090 set to "lite" as opposed to medium. This is netting me 105mh with my vram temp at 92.

I will be transitioning to T-Rex miner however so I can facilitate some msi afterburner settings. I've used these:
Core Voltage: 0
Power Limit: 79
Temp Limit 84
Core Clock: 0
Memory Clock: 1481
Fan Speed: 100%

Temps were 90-92 fluctuating. Hashrate was 106mh. Some tweaking still needs to be done but it was just a quick n dirty try.


In the near future (end of the month) I'll be putting the 3090 into its' own open air mining rig along with its' brother and will hopefully see great results going forward.