How to reduce stuttering and audio distortion in Windows 10

In Windows 10 build 1803, Microsoft made some kernel changes related to hardware timers that broke a lot of device drivers and caused high latency, stuttering and audio distortion on many systems. Microsoft claimed it was fixed on several occasions but is not completely true. Here are several tips for these who have encountered such issues.

Enable/disable HPET and Dynamic Ticks
Some users claim that forcing High Precision Event Timer (HPET) as a main timer and disabling dynamic ticks solve latency issues and audio distortion. Some users said its the other way around.

You can try mix between the three.

Look for problematic drivers
LatencyMon is a free utility that can be used to detect problematic drivers. LatencyMon analyzes the possible causes of buffer underruns by measuring kernel timer latencies and reporting DPC and ISR execution times as well as hard page faults. It will provide a comprehensible report and find the kernel modules and processes responsible for causing audio latencies which result in drop outs. It also provides the functionality of an ISR monitor, DPC monitor and a hard page fault monitor.

LatencyMon will display the highest latencies of a kernel timer and report the highest execution times of ISR and DPC routines as well as hard page faults. In most cases it will also find the drivers and processes responsible for executing them. It will create a comprehensible report which also displays all sampled data in a detailed manner allowing you to perform in-depth analysis. 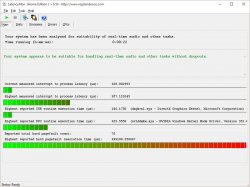 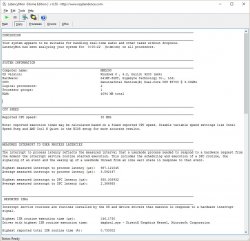 There is another useful utility worth mentioning: TimerBench, a freeware that tests the theoretical and gaming performance of Windows' timer facility QPC (QueryPerformanceCounter) to compare different timer settings. TimerBench uses Unreal Engine 4 and DirectX 11.

Search for better drivers
Some vendors have updated their device drivers to address these issues. Some version of drivers may not be affected at all. Try updating to a new driver, older driver, and alternative one. Most vendors publish drivers on their websites, but there are some like Realtek that release new drivers only through Windows Update. For example, the latest Realtek audio driver is available here, and needs to be installed manually from the device manager. If automatic driver update gets in your way, use this registry export to disable it. Sound Blaster Z owners should check out this driver.

Update/downgrade the motherboard's BIOS
Make sure to check the motherboard's/laptop's vendor website for BIOS and firmware updates. These may reduce latency and eliminate these issues completely. Try to contact the vendor's support, sometimes there is a beta BIOS kept in private. And sometimes older version works better.

Tested it, pic 1 is with your settings and 2nd withouth it. But I use asio, so maybe thats why.

added 3pic becouse the 2nd was only few seconds.

I posted 3 presets of settings. Results may differ between platforms and motherboards.
E

Regeneration said:
I posted 3 presets of settings. Results may differ between platforms and motherboards.
Click to expand...