System Specs
Lenovo unveiled the Titanium Enterprise NCC-1701A, a gaming PC with the phrase "enterprise" in its name. Only they aren't referring to the market-segment, but arguably the most famous ship, real or fictional, to bear the name "USS Enterprise." This gaming desktop looks like a scale-model of the Star Trek starship USS Enterprise from TOS (the original series) cinematic renditions, in which Captain Kirk and his motley crew get an upgrade to a modernized starship bearing the Starfleet registry NCC-1701-A. Perhaps the only perfectly-overlookable bits Lenovo got wrong is that bulge near the drive section, between the warp nacelles, because it accommodates some cutting-edge hardware.

Its warp-core so to speak, is a 9th generation Intel Core processor, which could very well be 8-core. In charge of its fire-power is an NVIDIA GeForce RTX 2080 graphics card. Other drool-worthy specs include 32 GB of DDR4 memory, 1 TB M.2 SSD + 2 TB HDD in charge of storage, Killer DoubleShot networking, and RGB LED embellishments all around its body. Lenovo is serious about bringing the Titanium Enterprise NCC-1701A to market, even if in small quantities. This is not a concept. Now if only the saucer section opened up from the top to reveal a Blu-ray drive, Discman-style.

that's the coolest design i saw ! would love to have one...

System Specs
According to Liliputing it's for the Chinese market first, and will be $2000+. I really want to know how big it is. But yeah, even I kinda like it even though I'm not really a Star Trek fan.
T 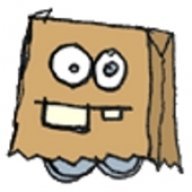 System Specs
They should make a Moonbase Alpha spaceship computer instead

After all that $10000 sinking Shi(p/t)s and trashcan that cant cool
FINALLY a product worth my attention. How much?

System Specs
If it doesn't have a button that plays phaser and photon torpedo sounds, its just a huge waste of money.
T

This is clearly NOT the Enterprise A. It would have NCC-1701-A on it, not NCC-1701. It is the retrofitted Enterprise seen in the first three films. Obviously the author is not a Star Trek fan.

I can only imagine how many gazillions of $$ they had to pay Paramount/CBS for the right to use the name and designs....

but as already pointed out above, the labeling is wrong, as the retrofitted ship was designated as NCC-1701-A. Hopefully they will correct this oversight before production ramps up, cause me want several of these, more as a collectible item than a computer though.....

Should be NCC-1701i since it's Intel powered

techforumguy1 said:
This is clearly NOT the Enterprise A. It would have NCC-1701-A on it, not NCC-1701. It is the retrofitted Enterprise seen in the first three films. Obviously the author is not a Star Trek fan.
Click to expand...

Can only imagine the temperatures of that GPU...

I smell something burning...

R-T-B said:
I smell something burning...
Click to expand...