Not sure where to put this, networking related, kinda. 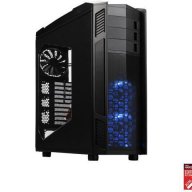 System Specs
I have been trying to figure out how to string several mother boards and their processing power together. I wanted to get a big fat power supply and splice the heck out of it so I could turn on one MOBO and have the rest boot up too .
Dangerous, bad, fire hazard, everything terrible will probably happen. ok Fine

Then I thought why couldn't I string some MOBO's together with maybe PATA or SATA cables. No, computers don't work that way.

Apparently, the only, no ONLY way to get two computers to talk to each other is via ethernet cable.
Which is fine if you only want to create a closed network. But what if you want to connect two together AND connect them to something else, like Folding@home?
I have been wanting to frankenstein together some home brewed super computer, not sure what I could do with it. Probably only be a little more useful than a super computer made out of Atari's, but what else fun can you do with a half dozen duo core processors and mother boards? I could literally stack the mother boards on top of each other with just enough space for their individual heat sinks.
I am thinking something like a 12 core 48 GB Ram contraption that would probably need its own dedicated power supply (honda generator) just to keep the power bill low. I just have to figure out how to get all of them to work on the same task together.
Anyone with enough computer genius able to help me figure it out?