I just started working on the follow-up of my HAL (modded 1.3U server case) project.

This time it will be built from scratch.

Constraints:
- Shorter depth and a bit more eight to free some space on my desk
- Still under the monitor (HP Omen 35), while finding a way to highlight its great looking octogonal stand.
- Still a custom loop for CPU and GPU, but improving airflow for non-watercooled components.
- cheap material, easy to work with... and delivered at home.

Here was my first rough idea but it's evolving as I bump into unforeseen constrains and new (and hopefully good) ideas:

The idea:
- Octogonal shape, to repeat the shape of the monitor stand.
- For the material, I opted for wood, with 0.5 inch square dowels as the main material for the case... top and bottom plates will be meshs of intertwinned dowel which will require quite some work with grooves.
- Smaller parts will be 3D printed in PLA.
- The finish will be deep mate black with red accents (mostly from leds), to fit the HAL theme.

Tools:
- Just invested in a BIQU B1 3D printer (basically an upgraded Ender 3)...
- ... and I also got a Sainsmart Genmitsu 3018 ProVer CNC machine.
- I am taking this new project as an opportunity to learn the basics of Autodesk Fusion 360, especially for 3D printed parts (slicing with Cura). To work on grooves I am using Inventable Easel to generate the g-code for the CNC machine.
- Electric mitter saw.
- Dremel

Nothing really fancy in terms of PC parts... my good old OCed Core i7 4790k, Asus ROG Maximus Impact VI (such a wonderful card) and EVGA Geforce GTX 1080 Hydrocopper. Only slight upgrade is a full cover waterblock from Bitspower for the motherboard.

Here is a first attempt at assessing the internal layout and dimensions (the cardboard way... it was a few weeks ago and I could barely design anything on Fusion 360).

By the look of it my 2x 240 slim rads won't really fit inside... I am going to install them outside (using pass-throughs), in the back of the case, raised vertically.
Due to the octogonal shape and overall clearance, I will have a rather unusual layout for the mother board and (single-slot) GPU: "crossed", GPU underneath the motherboard, with motherboard connectors on the rear left and gpu connections on the rear right.


First scratchbuild (in ages, I had a few rather aesthetically unfortunate attempts at cubic acrylic cases back in the 90s), first 3D printer, first CNC, first steps in CAD... this is going to be hectic and fun.
I will documents my steps (and missteps) so that it may be useful to some of you wishing to embark in similar projects

Next step: lots of dowels cutting, sanding and assembling.

I. Working on the bottom plate.

I decided to work on the bottom plate first, as a way to identify potential issue and improve things before I work on the top plate which will obvious be much more visible.

The idea is to intertwine square dowels which will create more rigidity than just carving square holes in a sheet of wood (especially for the top plate which will support the monitor.

Here is a first rough layout before grooves are carved.

I used Inventable Easel (free version) to design the grooves and generate the Gcode.

This was my first cut just after the models presented by Sainsmart.

- I used A Dremel 654 1/4" Straight Routing Bit: with it's 1/8" shank it works well with the collet included with the 3018 by default, but make the job much faster than with a 1/8" bit, it seems to work will on these poplar dowels.
- Dowels are fixed to the spoilboard with the painter tape + superglue trick.
- compared to usual wood CNC works I don't cut full pieces from a plain wood stock... this requires quite some precision in the alignment of the origin, which proved to be tricky...
- also considering that the carving area is actually a bit less wide than 30cm due to limit stoppers... I had to have a second pass for the last groove... with risks of alignment inconsistencies. Thinking twice a larger CNC would have been a better choice but there is quite a price bump past the 3018, as they come with more than just a bigger frame (more powerful motors etc...). I will at least probably buy the 3040 extension kit for 3018 from Sainsmart or make my own soon.
- appart from alignment consistency, one thing i did not think about at all was tolerance, especially for grooves... Down the line, this required quite a lot of filing and sanding to adjust everything.
- this was all the more real as these dowels come with slight discrepencies in thickness are sometimes not perfectly straight. Grain is very random too.

The bottom plate after grooves are cut, and rough sanding/filing.

I will attach the side dowels later on as the basically lock everything in place, then apply a bit of wood filler on some spots and sand more.
The objective throughout this build is to avoid the wooden look and feel, so sanding is going to be long.

Quite a few mitter saw cuts for these longer sides as each side is assembled from between 14 and 21 parts.

Here is how it's assembled from the inside:

And here are the four assembled sides:

From left to right:
- front right side, only one with no hole.
- front left side, 5.25 baie for my good old EKWB pump/res combo.
- back left side, mother board bezel.
- back right side, GPU ports.

Challenges:
- no laser on the mitter saw and noob DYIer = not too precise cuts... quite a few ajustments, some wood filler and loooots of sanding required.

Next step: I started working on CAD for the 4 corner pieces, but I am still waiting for some actual parts (USB 3 ports, C14 power inlet etc) to be delivered... actual dimensions of which I need to measure in order to fine tune drawings before 3D printing.

One idea while working on the sides... 0.5 inches vents are actually quite wide and the sides might feel a bit "empty"... I am thinking about working on a 3D printed mesh of some sort.
T

nice project mate, i am watching you

nice project mate, i am watching you

Thanks you and all for the interest!

Here is a new update.

III. Design and printing the "corner" pieces (shorter sides of the octagon)

Fusion 360 is actually quite intuitive.

I started with the front corner and got this design done:

And here are the four corners printed:

From left to right:
I'm really happy with the BIQU B1 so far!

Just did more sanding and glued the part of the bottom plate... tomorrow I'll apply some filler and have a last fine sanding.

Challenges and new ideas:
- considering my rather weak skills with the mitter saw and the considerable amount of time it took to adjusting and sanding afterwards... I am thinking about using a CNCed top plate. I could use the glossy opaque black sheet of acrylic I used on my first HAL and maybe reinforce it somehow. Only issue is that it's going to have to be assembled from 4 pieces considering the working area of the 3080.
- Also, the wooden sides look rather empty, I am working on a thin transluscent 3d printed mesh, wondering if I should stick to the original movie HAL or go for something more organic like voronoid.

Changed my plans slightly, as I need a new bit to surface the bottom plate rather than sanding it.

I worked on modeling the housing for rads and their fans.

Here is how this will look:

I am printing in two halves so that the print fits... will post pics asap but each half will take 1day+

System Specs
Hi everyone!
First of all, best wishes to all of you for 2021!


I am waiting for better weather to paint radiators supports outside.
In the meantime, I worked on wooden parts.

As a result, I was able to assemble the case for the first time.

Everything fits quite well after a few minor adjustments.
The 4 rods in the back are supports for radiator holders.

I also started to design the top plate: 4 parts of glossy black acrylic, with an aluminium inlay to make sure it can support the monitor.

as mentionned earlier, side were looking a bit dull.
Today I tried a few designs using voronoi patterns on sides.

Here the best version so far, just out of the printer:

And mounted on the case (it simply clips):

It still requires quite a bit of paint work.

Back soon with a new update, have fun!

Still needs a bit of fine tuning but it gives a nice feel of the final project.
Can't wait to see how it plays out with the glow of EKWB Vardars RGB fans behind.

Yesterday I worked on the plastic/aluminium bars which will strengthen the top plate.

Here they are (PLA with aluminium inlay):

I just finished the top plate

So it's finally time for the first complete impression.

Here are the next steps:

- Mother board / PSU / pump-res trays and/or standoffs.
- probably some adjustments to wooden parts on the bottom and sides to allow for more clearance for the GPU.
- pathing of tubes and wires. 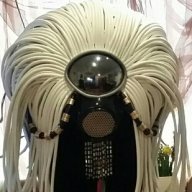 System Specs
That is one fine bad ass bunny if i ever seen one ,cheers.

I designed and printed some trays and standoffs this weekend, here they are:

More updates in the course of the week!

I took a little break as work got in the way of my hobbies for the past month.

Also, this is basically a new enclosure for the (now aging) parts of my main PC on which I do CAD, CNC control, not to mention a little gaming... so even after a few builds it's always a bit scary to take the last step, assemble/dissassemble everything and realise something does not fit, or that I miss a certain angle fitting. This often means wait a few days or worse... have to reassemble the current HAL... which is a pain in its own right

I should really get better at CAD and design and fit all the parts in advance.

My main concern right now is the clearance for the GPU + bent PCI-E ribbon under the motherboard tray...

So... I disassembled everything again... initially tried to manually dremel my way out of this, but ended-up shaving an extra 2.5mm off the bottom plate where the GPU will sit with the cnc which is much cleaner... crossing fingers for this to be enough.

Hopefully more progress to come in the coming days.