Enter the GeForce GTX 580 review. If two weeks ago somebody told us that today NVIDIA would be hard-launching a new high-end graphics processor under a new product family (the GeForce GTX 500 series), we'd have laughed out loud. We were too busy looking in AMD's direction for its new high-end GPU in the works, which is still nowhere in the horizon. It's that freaky moment in which you're slowly treading your way in a fairly linear horror FPS game, and turn around to find a monster breathing down on you. If the fact that NVIDIA was working on releasing a new high-end successor to the Fermi based GTX 480 today wasn't surprise enough, the fact the GeForce GTX 580 is claimed by NVIDIA to be the "best" GPU, and not just the fastest, certainly is. The GTX 480 gave us more than satisfactory performance, but was a bit of a let down on the thermals, and power consumption fronts. The claim that NVIDIA made the GeForce GTX 580 to outperform the GTX 480 and have better thermals and lower power draw certainly raises some eyebrows, because NVIDIA is building the GF110 GPU on a TSMC 40 nm process, just like the existing GF100 "Fermi".

NVIDIA's GF110 graphics processor is still based on the Fermi architecture and the GTX 580 review's architecture diagram looks exactly the same as the 512 shader GF100 version. However, GF110 can certainly be described as built from ground up. NVIDIA is said to have made improvements to GTX 580 key components at the level of transistors, making sure that there are lower latencies between components on the GPU, and electrical leakages are minimized. In GTX 580's 3 billion transistor chip that draws over 200W of power, leakages are the main enemy to power efficiency and overall chip stability. The GeForce GTX 580 packs 512 CUDA cores (up from 480 on the GeForce GTX 480), and features 64 texture memory units (TMUs), 48 raster operations processors (ROPs), and a 384-bit GDDR5 memory interface holding 1.5 GB of memory. The clock speeds are also upped from the previous generation, 772 MHz core, 1544 MHz CUDA cores, and 1002 MHz memory. The GTX 580 is capable of rendering 2 billion triangles per second (a staggering figure). Other than that there are no other major changes to the GeForce GTX 580 feature set.


NVIDIA's card looks more like a GeForce GTX 285 card than a GTX 480. NVIDIA has implemented several changes to the cooler which certainly help the card keep cooler than GTX 480. Also there is an extra space around the fan opening to allow for easier access to air when running in SLI.


The card has two DVI ports and one one mini-HDMI port. According to NVIDIA the card also supports DisplayPort if board partners want to use it. Unlike AMD's latest GPUs, the output logic design is not as flexible. On AMD cards vendors are free to combine six TMDS links into any output configuration they want (dual-link DVI consuming two links), on NVIDIA, you are fixed to two DVI outputs and one HDMI/DP in addition to that. NVIDIA confirmed that you can use only two displays at the same time, so for a three monitor setup you would need two cards.

NVIDIA has included an HDMI sound device inside their GPU which does away with the requirement of connecting an external audio source to the card for HDMI audio. The HDMI interface is HDMI 1.3a compatible which includes Dolby TrueHD, DTS-HD, AC-3, DTS and up to 7.1 channel audio with 192 kHz / 24-bit. NVIDIA also claims full support for the 3D portion of the HDMI 1.4 specification which will become important later this year when we will see first Blu-Ray titles shipping with support for 3D output.


You may combine up to four GeForce GTX 580 cards in SLI for increased performance or improved image quality settings.


Here are the front and the back of the card, high-res versions are also available (front, back). If you choose to use these images for voltmods etc, please include a link back to this site or let us post your article.


The GeForce GTX 580 is one of the few graphics cards that uses a vapor-chamber technology heatplate to maximize heat transfer between the GPU and the rest of the heatsink. You can also see above that the heatsink cools secondary components like voltage regulation circuitry and memory chips. Overall this seems to be a very capable thermal solution but that also increases its price.


NVIDIA's 6+8 power input configuration is sufficient for the GTX 580 design and provides up to 300 W. 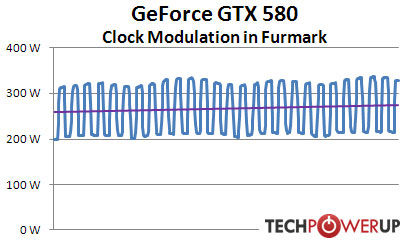 In order to stay within the 300 W power limit, NVIDIA has added a power draw limitation system to their card. When either Furmark or OCCT are detected running by the driver, three Texas Instruments INA219 sensors measure the inrush current and voltage on all 12 V lines (PCI-E slot, 6-pin, 8-pin) to calculate power. As soon as the power draw exceeds a predefined limit, the card will automatically clock down and restore clocks as soon as the overcurrent situation has gone away. NVIDIA emphasizes this is to avoid damage to cards or motherboards from these stress testing applications and claims that in normal games and applications such an overload will not happen. At this time the limiter is only engaged when the driver detects Furmark / OCCT, it is not enabled during normal gaming. NVIDIA also explained that this is just a work in progress with more changes to come. From my own testing I can confirm that the limiter only engaged in Furmark and OCCT and not in other games I tested. I am still concerned that with heavy overclocking, especially on water and LN2 the limiter might engage, and reduce clocks which results in reduced performance. Real-time clock monitoring does not show the changed clocks, so besides the loss in performance it could be difficult to detect that state without additional testing equipment or software support.
I did some testing of this feature in Furmark and recorded card only power consumption over time. As you can see the blue line fluctuates heavily over time which also affects clocks and performance accordingly. Even though we see spikes over 300 W in the graph, the average (represented by the purple line) is clearly below 300 W. It also shows that the system is not flexible enough to adjust power consumption to hit exactly 300 W.


Just like on the GeForce GTX 480, NVIDIA uses a CHiL CHL 8266 voltage regulator on their card. This controller offers extensive monitoring and voltage control options via I2C, so it's a great choice for overclockers.


NVIDIA's GeForce 110 graphics processor is made on a 40 nm process at TSMC Taiwan. It uses approximately 3.0 billion transistors which is 200 million less than the GF100. Please note that the silvery metal surface you see is the heatspreader of the GPU. The actual GPU die is sitting under the heatspreader, its dimensions are not known. According to NVIDIA, the die size of the GF110 graphics processor is 520 mm².

Benchmark scores in other reviews are only comparable when this exact same configuration is used.Each benchmark was tested at the following settings and resolution: