The main switches operate in two modes only, ON (fully conduction) and OFF (fully non-conduction) and chop the DC signal, coming from the smoothing capacitor, into pulses whose amplitude is the magnitude of the input voltage and whose duty cycle is controlled by a switching regulator controller (Marty Brown – Power Supply Cookbook). Thus the DC signal is converted to an AC rectangular waveform that is fed to the transformer. The latter steps down the voltage which feeds the secondary rectifiers that generate all DC outputs (+12V, 5V, 3.3V, 5VSB, -12V). The transformer also plays the role of an isolator between the primary and the secondary side. 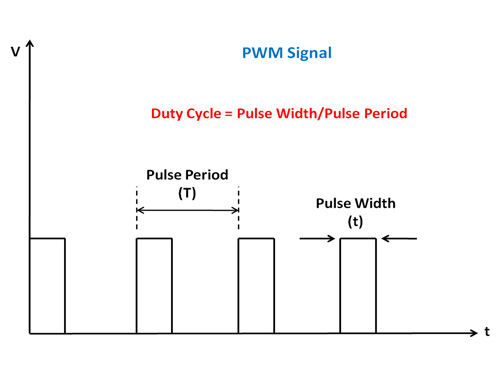 When the switches are ON there is zero voltage across them (theoretically) and when they are OFF we have zero current through them. So always the product V × I is zero. This means that there is no power loss on the switches. However this represents an ideal situation and in real life there are power losses since there is no transistor/MOSFET than can switch instantly. There is always a small period that a transistor (switch) is between ON and OFF state (also called linear region) and during this period the V × I product is not zero. Because of that all MOSFETs in a PSU (and not only) are cooled down by heatsinks and a fan (although there are some PSUs that use only passive cooling). 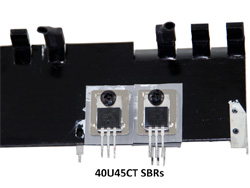 The roles of output rectifiers and filters are, as their names state, to rectify and filter the high frequency switching waveform created by the switches (MOSFETs) and fed through the secondary of the main transformer(s). In this stage we meet two types of rectification designs, passive and synchronous. In the first Schottky Barrier Rectifiers (SBRs) are used and in the latter MOSFETs take the place of SBRs. In synchronous rectification efficiency is increased since we get rid of the forward voltage drops of SBRs. To make this crystal clear let's give an example. A typical SBR has 0.5V voltage drop so if we want to conduct 40A then we have 40 × 0.5 = 20W. Now if we use a MOSFET instead of an SBR and assuming that the MOSFET's RDS(on) is 3 mO then we have 40 × 40 × 0.003 = 4.8W. This results in 15.2W less power dissipation and 24% increase in efficiency.

Besides the two above designs sometimes a hybrid one, called semi-synchronous design, may be used. In semi-synchronous MOSFETs and SBRs are used to reduce cost and increase the efficiency above passive design's levels.

The generation of -12V is done with the usage of a conventional diode, since we do not demand much power from this rail (below 1A in most cases). For 5VSB a completely independent circuit with a transformer is usually used, since 5VSB are working continuously even when the PSU is OFF (in standby mode). For the generation/filtering of the main outputs (+12V, 5V and 3.3V) there are three types of regulation. Group regulation, independent regulation and DC-DC conversion. We will analyze each one of them in the below paragraphs. 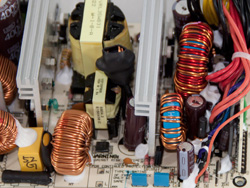 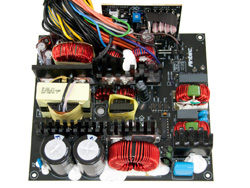 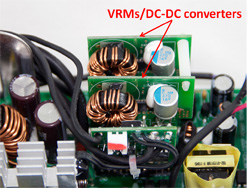 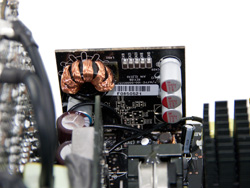 Now in many contemporary PSUs the generation of the minor rails is done with the use of buck -step down- converters (DC-DC converters or Voltage Regulation Modules – VRMs). In these PSUs 5V/3.3V are generated from the +12V directly. This has a positive impact on efficiency and in cross-regulation. Here we must note, PSUs that utilize DC-DC conversion are independent regulated too. 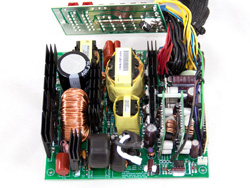 A last note before we move to the next stage, the toroidal chokes located after the rectifiers take part not only in the rectification but also in the filtering process, since they are used for ripple, voltage and current, reduction on the DC outputs. However in PSUs that utilize LLC resonant topologies usually there are no toroidal chokes in the secondary (for +12V generation) and if there is any then it is used only for filtering.