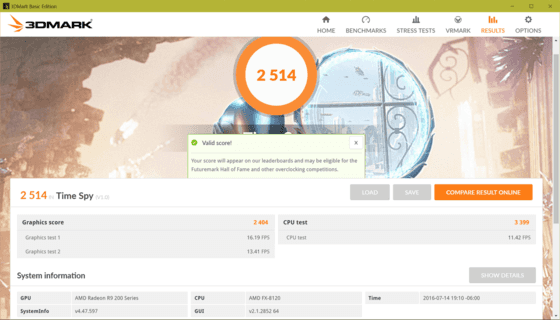 3DMark is a popular gaming performance benchmark used by millions of people, hundreds of hardware review sites and many of the world's leading technology companies. 3DMark includes everything you need to benchmark your PC and mobile devices in one app. Whether you're gaming on a desktop PC, laptop, notebook, or a tablet, 3DMark has a benchmark designed for your hardware. 3DMark Basic Edition includes six benchmark tests.

You can change the language on the Options screen.

This update marks the end of support for 3DMark Cloud Gate and Ice Storm benchmarks.

These tests no longer provide useful results with modern hardware. Cloud Gate and Ice Storm tests are now hidden in the app by default.

If needed, you can find them by going to the Benchmarks screen and using the filter option to "Show unsupported tests."

This is a minor update that adds a fix to the Steam version of 3DMark. There are no changes in the standalone edition. Benchmark scores are not affected.

This is a minor update. Benchmark scores are not affected.

This update adds the PCI Express feature test, a new test for measuring the bandwidth available to your GPU over your computer's PCI Express interface. This test is only available in 3DMark Advanced Edition and 3DMark Professional Edition.

This update adds the NVIDIA DLSS feature test, a new test for comparing performance and image quality with and without DLSS processing. This test is only available in 3DMark Advanced Edition and 3DMark Professional Edition.

Port Royal is only available in 3DMark Advanced Edition and 3DMark Professional Edition.

This is a minor update. Benchmark scores are not affected.