by
Raevenlord
Jan 2nd, 2017 10:46 Discuss (10 Comments)
German company Speedlink is about to bring their own gaming flagship gaming mouse towards the US market, one that is arguably over-saturated. However, as times have shown again and again, there is always a little more space for some products that manage to distinguish themselves in the consumers' eye.

To that end, Speedlink is putting up its Omnivi gaming mouse up against the very best and most renowned in the industry, sporting an ergonomic, polarizing design that is meant to either work or not at all for its prospective users. This means its curves and body design are crafted in particular ways in an effort to provide superb grip and feel - to a limited set of right-handed users whose hands adapt to the mice as it was designed. Like all specific designs, it risks alienating part of the potential user base who simply doesn't possess the physical and hand posture characteristics that best work with this mouse; this being the reason why so many mice have rather "neutral", non-contoured designs - in an effort to appeal to a larger potential customer base.

The heart of the Omnivi is powered by an optical sensor offering 12,000DPI (which cycles through 800/1,600/2,400/4,000/8,000 and 12,000 DPI; Speedlink didn't disclose its manufacturer). It also possesses non-RGB LED lighting, which features 7 colors (red, yellow, green, cyan, blue, violet and white), though all of its 4 lighting zones (a ring around the bottom edge, the scroll wheel, logo, and DPI button) can be configured independently.

When it comes to buttons, the Omnivi breaks the mold from the mice of old with its 10 buttons: there are the usual left/right click, scroll wheel, and top-mounted DPI buttons, as well as two forward/back navigation buttons, but there's also a cluster of four buttons seated deeper on the thumb rest area towards the palm rest.

The Omnivi's software suite allows the user configure any of the buttons for alternate functions, as well as supporting macro creation. It's unclear if the adjustable lighting is done on the mouse via a series of clicks or if you can play with those settings within the software. The software allows for multiple profiles, which are saved to your PC alongside the macros. However, the Omnivi does have internal memory, which is where it stashes DPI settings and lighting settings. Therefore, if you plug the mouse into a different PC, your lights and DPI will carry over, but your button configurations or macros will not.

The Omnivi comes in at 145 g (approx. five ounces), and the MSRP stands at $70, which puts it right about where the market says it should be. Immediate (or at least impending) availability is expected for the Omnivi.

#1
Nice, I'll keep my eye on this one. While I like my Logitech G700s with it's thumb rest I wish I had pinky rest on the other side so it's not dragging on the mouse pad all the time.
#2
Shame it's right handed only, 145g is kinda on the heavy side.
#3

JizzlerNice, I'll keep my eye on this one. While I like my Logitech G700s with it's thumb rest I wish I had pinky rest on the other side so it's not dragging on the mouse pad all the time.

I really wish Logitech would do an updated G500/G700 with a pinky rest instead of all the sci-fi inspired teenager mice they're making now.
#4
I don't know about that, would not mind getting a G900 my self although they only come with a 2 year warranty now unlike the G700s which is 3 years.
#5
pics do not open, only "X" visible. OK, works now, but superslow (all pics at frontpage)
#6
G900 here -- Just do it
#7
non ambidextrous, Ridiculous looking.

Roccat Kone XTD myself
#8
Now there is a brand i will never buy again, still promising updated software for my MK Pro and none in sight,
#9

AsRockNow there is a brand i will never buy again, still promising updated software for my MK Pro and none in sight,

#G900ChaosSpectrumMasterRace
#10
I had there DECUS - was crap - not recommendable, too flimsy 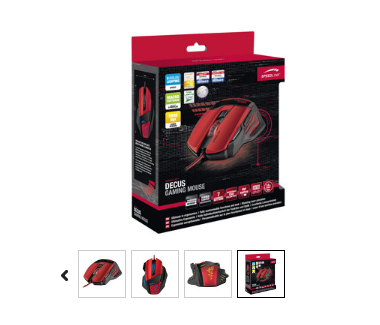