Press Release by
Uskompuf
Oct 5th, 2020 22:46 Discuss (39 Comments)
Feel the thrill of the chase and the rush of escape in Need for Speed Hot Pursuit Remastered, coming to Playstation 4, Xbox One, and PC on November 6, and to Nintendo Switch on November 13! Ten years ago, Criterion Games released their critically acclaimed franchise debut Need for Speed Hot Pursuit. It introduced NFS and racing fans to the winding, open roads of Seacrest County, Criterion's renowned feel for breakneck speed and gameplay, and the innovative Autolog system, empowering true social competition between friends.

Ever since, we've heard so many stories about the triumphant moments and heated rivalries Autolog fostered. Some of which run very, very deep. Unleash a savage sense of speed both as an outlaw and a cop in this timeless racing experience updated for today's platforms. Get cross-platform multiplayer and Autolog, enhanced visuals, all main DLC delivered at launch, and much more. It's time to reignite the pursuit.

Race Your Friends with Cross-Platform Multiplayer and Autolog

Bolt down Seacrest County headfirst behind the wheels of the world's hottest high-performance cars, in racing that is socially competitive at its core. Connect with your friends in cross-platform, head-to-head pursuits and races, or get challenges delivered based on their activity for asynchronous competition through the highly dynamic Autolog system.

Autolog is also supported with cross-platform sync, so you can make a mark on your friends' Speedwalls no matter if they're playing on PS4, Xbox One, PC, or Nintendo Switch.

Chase and Escape with Weaponized Supercars

It wouldn't be a Hot Pursuit without pushing the world's most desirable supercars to their limits - on both sides of the law. Bust suspects in supercharged cop interceptors enhanced with tactical weaponry, or level the playing field with counterattacks and defensive maneuvers as an elite racer. Strategize to gain an edge over the competition, no matter what side you're on!

A deep and fully-defined single-player career delivers the action of both sides, with a seamlessly linked multiplayer experience across all race modes. Take on friends or play through the career solo to earn Bounty and unlock new cars, weapons, and equipment.

Depending on your specifications, 4K/60 FPS is supported on PC, and players can choose between 4K/30 FPS or 1080p/60 FPS on PlayStation 4 Pro and Xbox One X. Base versions of PlayStation 4 and Xbox One will run the game at 1080p/30 FPS. In addition to the listed improvements for the Nintendo Switch version, PlayStation 4, Xbox One, and PC versions are also updated with upressed UI, higher resolution reflections, boosted textures, more particles, and improved AA/SSAO.

#1
What about Most Wanted 2005 and U/U2? Something that would be worth getting.
#2
"include all main DLC" goold old EA
#3
I had fun playing the original, but needing to log in online turned me off gaming.
#4
I wonder if they will be updating the car models. It's been 10 years since the edition they are remastering. I would actually love for them to remake Hot Pursuit 2, from 2002. 18 years old at this point, but it was great fun.
#5
Can't believe it's been 10 years already, in my minds eye this game still looks great. Having said that it's often the case that we romanticise and remember games looking great for their era, fire them up and they seem like mud.
#6

wolfCan't believe it's been 10 years already, in my minds eye this game still looks great. Having said that it's often the case that we romanticise and remember games looking great for their era, fire them up and they seem like mud.

Yep, it's been a decade! The 2010 version still plays and looks pretty good. I have a downloadable version I got from Amazon that connects to nothing at all. I look for those kind of things whenever possible.
#7
I still have the special edition with case I got launch day back in 2010. Odd choice to remaster, but I'll probably grab it.
#8
This is a re-release for the Switch and PS4/XB1 of the original PC game, with DLCs which never made to PC. The comparisions are out on YT and there is no remastering in this game, even more there are reduced effects too. It's a quick cash grab from EA to fleece people who are not aware of this b.s. PC owners ignore this trash and play the original. DLCs or not, $30 + EA origin DRM and on top reduced effects (Smoke and lighting are biggest to notice) vs OG not at all worth. They could've released a DLC pack for a few bucks for the existing owners or sell definitive edition, nope because they have to put more effort on the original game so they don't want to do that when they can get away with this garbage game renamed as "Remaster". Even Crytek's Remaster is better than this, which itself was a dumpster fire.
#9

NightWhat about Most Wanted 2005 and U/U2? Something that would be worth getting.

NGL, a Remaster of the 2005 Most Wanted would probably sell like hotcakes. The core gameplay is still very fun imo, it just needs updated visuals to be up to "par". Rockport with modern visuals would probably be amazing
#10

NightWhat about Most Wanted 2005 and U/U2? Something that would be worth getting.

Exactly , I understand U/U2 would be difficult to incorporate a multiplayer aspect , but the old Most Wanted 2005 with the autolog system would work well in my opining without the stupid perk system on the cars.
#11
Is it the need for speed 3 or which? I d lile remastared the NFS 5 Porsche Unleashed, the best ever NFS.
#12
Rampage!
#13
Most wanted had a rerelease or remake or something in 2012 ?
#14
Loved the original one and Hot Pursuit 2, but I'm still waiting for NFS: Porsche Unleashed remaster.
#15
I'm so completely not hyped to play this.

NFSU2, everything else is nonsense. And when it comes to that... Criterion, where art thou, I want my Burnout 2 remaster, and yes, please do focus on the crashes.
I mean... why was this not repeated over 17 years of racing reboots

#16
Finally a NFS I can look forward to (personal opinion) - NFS was always about racing extremely exotic cars in unbelievable locations (jungles, caves, snowy mountains, active volcanoes, etc), the ricer games never appealed to me.
#17
NFSHP2 to Undercover have been done with the same engine ("speed' engine) from blackbox, and they fired almost everyone from blackbox. So, it's asking work to redo engine untouched and unupgraded with 12+ years old, while every NFS from criterion are done with a modded burnout paradise engine ("Chameleon") or the frostbite, which only need a copy paste from last game of the franchise, and that's all folks

I'll not buy or even play that one too, i really would like to have a NFSU/MW/HS remaster instead of this ... burnoutFS
#18
Redo underground 1 and 2
#19
It looks exactly the same.

Enable Ambient Occlusion and slap a Remaster badge on it BAM!... sell that shit! 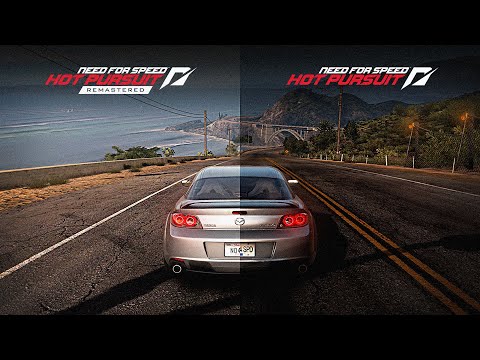 DemonicRyzen666Most wanted had a rerelease or remake or something in 2012 ?

TomorrowAnd it was horrible mess.

Slap that term to every single NFS game released after Porsche 2000. :P
#22
Nah, they should have remaster the 1999's
Need for Speed: High Stakes
#23
they need to remaster, need for speed, Porsche unlimited
#24

DammeronSlap that term to every single NFS game released after Porsche 2000. :p

I disagree. And so would many others. Some the Block Box released titles were genuinely good and engaging.
If i had to point at a game that finally broke the camel's back so to speak it has to be ProStreet released in 2007. It's predecessor Carbor was already iffy and i did try ProStreet but quickly abandoned it. After that only ones i've played was HP in 2010 (the one being remastered now, completed it) and the 2012's MW reboot that was horrible and i quit after 5 min of frustration.

I have not even played any of the newer ones from the past 8 years.
Tho i agree that i would have like to have seen the 1998 version remastered instead.

Prima.VeraNah, they should have remaster the 1999's
Need for Speed: High Stakes

That's what i been replaying the past days, it's great fun still, and with some fiddling around works flawless on Windows 10.
Add your own comment
Jun 19th, 2021 10:35 CDT change timezone
Sign in / Register