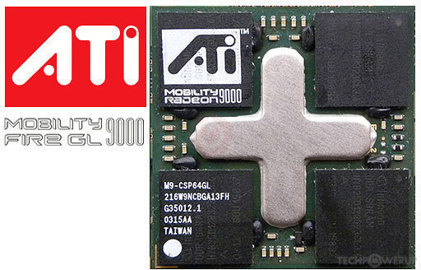 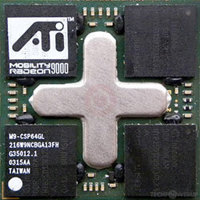 The Mobility FireGL 9000 was a professional mobile graphics chip by ATI, launched in January 2002. Built on the 150 nm process, and based on the M9 graphics processor, in its M9-CSP64GL variant, the chip supports DirectX 8.1. Since Mobility FireGL 9000 does not support DirectX 11 or DirectX 12, it might not be able to run all the latest games. The M9 graphics processor is a relatively small chip with a die area of only 81 mm² and 36 million transistors. It features 4 pixel shaders and 1 vertex shader 4 texture mapping units, and 4 ROPs. Due to the lack of unified shaders you will not be able to run recent games at all (which require unified shader/DX10+ support). ATI has paired 64 MB DDR memory with the Mobility FireGL 9000, which are connected using a 128-bit memory interface. The GPU is operating at a frequency of 250 MHz, memory is running at 200 MHz.
Its power draw is not exactly known. This device has no display connectivity, as it is not designed to have monitors connected to it. Rather it is intended for use in laptop/notebooks and will use the output of the host mobile device. Mobility FireGL 9000 is connected to the rest of the system using an AGP 4x interface.