Soon after the press release announcing retail availability of Kingston's new performance-oriented USB drives had been published, I noticed some of our TPU readers sharing similar questions and interest in the same. After all, it has been a couple of years since the USB Implementers Forum essentially renamed USB 3.1 to USB 3.2, which we still haven't seen many portable storage solutions take advantage of. Okay, fair enough, USB 3.1 itself had within it the even older USB 3.0. This whole naming mess can be enough to confuse people, but marketing departments sure love it since it allows a new product to now have the shinier USB 3.2 moniker. So how does the new Kingston DataTraveler Max fare once the marketing talk is set aside? Let's address that question further in our quick-look article of the same, and thanks go to Kingston for providing TechPowerUp a review sample!


The stock image itself does not tell us much except that the DataTraveler Max has a long aspect ratio and comes predominantly in black with the company logo etched into the front. It is when going to the product page that we find out this is currently a family of three USB drives with storage options of 256 GB, 512 GB, and 1 TB. The name also confirms that it adopts USB 3.2 Gen 2 speeds for playback and writing alike, which is also known as USB 3.1, USB 3.1 Gen 2, or SuperSpeed USB 10 GB/s depending on where you chance upon the specification. The takeaway is that even if your system may not say it supports USB 3.2, this drive will not be handicapped by any halfway decent motherboard from the past couple of years and then some. Just make sure that standard is supported on a Type-C connector, however, since it is indeed a Type-C drive to add another to the "how did it take so long?" mindset.


There is a reason I chose the specific stock image above—it is of the 1 TB version Kingston was kind enough to ship my way without any specific requests for the same. Packaging is in line with all other consumer Kingston products we have seen before, with a white base for the cardboard box that in itself is fairly slim. The company name and logo greet us on the front at the bottom, with the specifics of the product at the top, separated by a colorful illustration of the same. Promising up to 1000 MB/s read and 900 MB/s write speeds, it does help grab the attention of many who may be in a retail store looking for a new USB drive; that is, unless you already have plenty of 2–8 GB sticks from the past decade and those suffice for life. On the back, we find out the drive is compatible with Windows, macOS, Linux, and Chrome OS, with the hardware requirement of a Type-C connector since Kingston does not include a Type-C to Type-A adapter in the box. There is little reason to not do so aside from the obvious one of cost since it would have been good for a more universal adoption even if it comes at a performance deficit in some cases.


Accessing the contents inside is relatively simple; there are seals on the top and bottom, of which you only need to open one. At that point, the single flap that is part of the box can be unfurled to pull out the two-piece plastic blister packaging holding the drive itself. There is nothing else to see here, not even a piece of paperwork, strangely enough. An illustration on the back of the box points towards how to use the connector itself, but this is otherwise a simple plug-and-play device. There is decent protection to the drive thus, although it does rely on the shipping packaging being good, too. A cutout on either side of the drive in the blister pack also makes reaching and taking out the drive easier as this is thus not one of the stubborn vacuum-sealed options.


The Kingston DataTraveler Max flash drive is quite light for the size because of the plastic casing. It comes in at 82 x 22 x 9 mm, and this sample weighed just under 12 g. The design, as with the Kingston Workflow Hub and readers we saw before, is a case of looking better than it feels in person. I expected a more metallic construction for a few different reasons here, not the least of which is because plastic is not a very good thermal conductor. But the Kingston DataTraveler lineup has been generally more affordable than its encrypted storage line, so let's hold judgment until after we gauge performance and pricing. Regardless, we can confirm the predominantly black aesthetic with the Kingston logo etched into the front amid ridges purely for looks. The drive capacity is seen towards the top side, in a red/pink color at that. Certification information is all gathered on the black, melding into the background without being distracting.


For those who care, the drive is made in Taiwan and employs a slider mechanism to keep the Type-C connector tucked inside. Well, not fully anyway since it is still exposed on the underside as seen above. I have no idea why Kingston went this route since it is still susceptible to impact damage if something hits the connector head-on, and you don't really gain much from seeing the connector in the gap between the plastic case components. Regardless, push in from the other side until the connector emerges fully out the other and the slider clicks in place. There is enough room left to pull the slider back instead of having to push the Type-C connector in, so that at least mitigates unnecessary physical pressure. Kingston does not provide any rating for the number of push cycles the slider mechanism can handle, but for what it is worth, I did not notice any discrepancies between the 45 times I did test this out over the course of the reviewing process. There is a functional key-loop ring on the body to carry this on a keychain should you wish.


The photo above is the 512 GB model of the same taken from Tweakers.net, who helped confirm that Kingston is using a hilariously overpowered controller for a USB drive. This is the Silicon Motion SM2320 SSD controller simultaneously announced with the DataTraveler Max and meant for external SSDs, which Kingston has paired with what appears to be TLC NAND flash. This effectively uses the SM2320 USB bridge controller to directly go to the Type-C connector, rather than a short cable as with external SSDs. Aside from the svelte form factor, that is really the only thing differentiating the DataTraveler Max from an external SSD, as the DataTraveler practically is one already.


Once inserted into a compatible slot, and making sure it is indeed a USB 3.2 Gen 2 one capable of 10 GB/s bandwidth, you will notice a stealth blue indicator LED light up next to the Kingston logo itself. This is no RGB USB drive. What you see is all you really get with the LED only acting to indicate activity. At this point, I quickly loaded up CrystalDiskInfo to check the metrics, but also the SMART-based operating temperature. Even at idle in a room at 20 °C, the plastic casing acts as an insulator and makes for a cool-to-touch flash drive that is actually hot inside. This gets progressively worse with activity and benchmarking, as the drive gets warm enough to the touch, but the plastic gets in the way of heat transfer. The controller, where I imagine the thermal probe is placed, hit ~90 °C a couple of times and hovered at 85 °C most of the time during higher loads. To its credit, I did not really notice much of a performance drop in typical work loads, with the bottleneck being the onboard cache, or lack thereof.

Performance in itself is impressive to say the least. Kingston has the fastest USB drive I have ever tested, easily the fastest of most USB drives ever made, too. Sequential speeds are really where things shine, but even random read/write speeds at higher Q-depths are highly impressive. All this makes for a great backup for larger media files in particular, which is why I linked the Kingston Workflow before, in that the DataTraveler Max makes more sense for the professional photographers and video-makers than the average office workers. This is especially relevant once you realize that the DataTraveler Max comes with five years of warranty, and sells for £50–142.50 (incl. VAT) in the UK, with equivalent prices in Europe and the USA where it is slowly coming in stock. For instance, BHPhotoVideo has pre-order listings for the the DataTraveler Max at $96.6 for the 512 GB model and $165.60 for the 1 TB model I have here. Such pricing may come off as a lot, and while it is, it is relatively inexpensive for the performance provided and the components inside. I will also note that some earlier reviews based pricing off a much higher expectation, so other storage editors anticipated the DataTraveler Max to cost far more than it actually does, which I suppose bodes well for the interested customer. If you happen to be one, let us know in the comment section what you think of these ultra-fast USB drives and what you plan to use them for.
Oct 24th, 2021 15:38 EDT change timezone
Sign in / Register 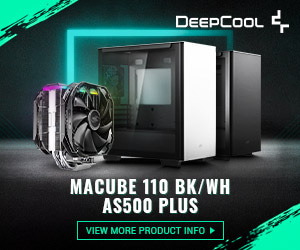 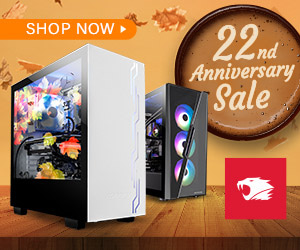