by
Raevenlord
Jun 28th, 2019 15:46 Discuss (43 Comments)
In another episode of the "so timely considering market projections for NAND pricing" news, Toshiba and Western Digital have disclosed expected impacts following an unexpected, 13-minute power outage on June 15th, that affected the companies' joint manufacturing facilities in Yokkaichi, Japan. Western Digital announced a loss of almost 6 Exabytes of NAND production - Toshiba is expected to have lost anywhere between 6 Exabytes and 9 Exabytes themselves, since they usually have their factories working closer to full capacity. Return to standard manufacturing rates is expected to only occur by mid-July.

Damage includes impacted wafers that were being processed, the facilities, and production equipment, hence the need for an extended inoperability period to seriously assess damages and required reinvestment. 35% of the world's NAND supply is produced at this Yokkaichi Operation campus (which includes six factories and an R&D center), so this outage and NAND flash loss is likely to impact the global markets. Whether or not this is enough to move the needle from oversupply to undersupply is as of yet unknown, but it is unlikely so - although pricing changes are expected after Q3 and Q4 orders have been settled (whose pricing has already been settled and can't be subject to change). Loss of confidence in the Toshiba and Western Digital manufacturing venture, however, could help offset some of that pricing increase. Obviously, companies have insurance policies that cover them in case of such unexpected events - should they fall squarely out of the control of said companies.

#1
Guess SSD prices have been too low, they once again need a little oopsie to raise the price again. Samsung will likely follow suit.

Grab some SSD now, they price will be going up soon.
#2
Probably a Japanese slug.....

Typhoons in Japan occur the most from July to October, especially in August and September. According to Japan Meteorological Agency, about 25 typhoons occur and 11 approach a year on average in the past thirty years.
:) just thinking
#4
Happened two weeks ago and they are now saying that this will effect supply after the recent projections of falling prices.... sure buddy.

So far these tactics haven't stopped the drop in prices for memory, there's other factors too but I'm suspecting that at this point enthusiast know better than to buckle to these price gouges.
#5
I did think Ssd prices were too good to be true these days.
#6
yea right this actually happened... someone pulled a switch and then back. no way a whole place like that would go down.
#7
Thailand flood 2.0
#8
Oh shit, here we go again....
#9
These actually make me think of criminal tactics. Not to say this specifically is a crime (they can do what they want), but they obviously grew up in that world of shadiness.
#10
Worldly people do ungodly things.
#11
Ah, the classic artificial flooding 2.0 to "fix" prices.
#12
Just as the NAND prices were hitting an all time low. How convenient. Reminds me when the HDD prices were "too low" and suddenly Nidec factories were "flooded" so the poor manufacturers were forced to raise prices and subsequently report record revenues...
Again, how convenient.
#13
No biggie, already bought myself 2TB Crucial for $230.
#14

lexluthermiesterI don't think this is going to have a wide-reaching effect. It effected only one NAND maker and only in one area.

Yes, the one that makes 35% of all NAND flash and much of it being used in SSDs and SD cards.
Legally they're two entities though. 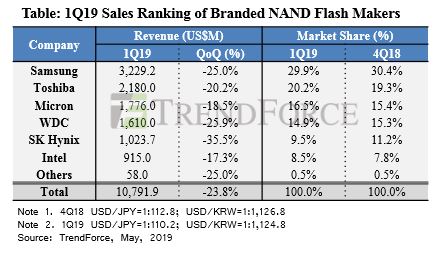 TheLostSwedeYes, the one that makes 35% of all NAND flash and much of it being used in SSDs and SD cards.
Legally they're two entities though.

While that is true, Toshiba and WD have multiple fab locations, this is only one.
#18
Here we go again... I guess stock up on prime day?
#19
Surely an emergency electrical generator /s would of been a small footprint in the budget of the facility from planning to completion of construction one would think.
Ass for the quick poll, Abstained.
#20
I'm wondering how can that be that a giant factory, probably with its own dedicated power plant and where backups have backups for backups, gets seriously affected by a 13-minute power outage, and a simple guy like me fixes 2 laptops, neighbor's monitor and keeps his home server running for continuous 8 hours after a post-storm power outage, just to keep business as usual...
#21

lexluthermiesterWhile that is true, Toshiba and WD have multiple fab locations, this is only one.

When in doubt, Alien Invasion is always an option as an excuse to raise prices.
#22
another typical "prices for flash memory is too low to cover our baseline, let's pull a quote on quote; "disaster" so we can cover up the controversial price fixing scheme as such."
#23
Last price hike started with Hynix factory fire and then lasted for years.

Like a perfect storm, losing 6-9 Exabytes, just the right amount to stop over supply and prices from falling further.

Pricing syndicate still up and running, they take turn increase prices, last time it was Hynix, this time it was Toshiba's turn.

The insurance company should take a really long hard look at the supposed cause of this power outage to calculate the odds of this happening.

At this point the odds are more favorable to this being a sabotage to keep prices up.

Why, because these accidents always seam to happen when they are needed the most to increase memory prices.

When memory prices are insanely high all factory's run perfectly without any major problem for years, even at over capacity, without these accidents happening.
#24
intentional stopping production may be unlawful anti-competitive practice, but random accident is innocent. In short: say godbay for low prices of SSD/RAM
#25
Am I missing something here but wouldn't somewhere like that have one massive UPS system just in case of something like this happening?? Beggars believe....
Add your own comment
Jan 24th, 2022 17:47 EST change timezone
Sign in / Register