by
AleksandarK
Oct 23rd, 2020 03:25 Discuss (77 Comments)
AMD's "Big Navi" GPU is nearing the launch on October 28th, just a few days from now. This means that benchmarks of the card are already appearing across the internet, and we get to see how the card performs. Being divided into two different versions, Big Navi comes in Navi 21 XT and Navi 21 XTX silicon. While the former is available to AMD's AIBs, the latter is rumored to be exclusive to AMD and its reference design, meaning that at least in the beginning, you can only get Navi 21 XTX GPU if you purchase one from AMD directly.

Today, thanks to the Twitter account of CapFrameX, a frame time capturing tool, we have benchmark results of the Big Navi GPU in Firestrike Ultra. According to the people behind this account, the card scores about 11500 points in the benchmark. Compared to NVIDIA's offerings like GeForce RTX 3080, which scores about 10600, the AMD card is 8.5% faster. It is not known whatever this is Navi 21 XT or Navi 21 XTX silicon, however, we can assume that it is the former, and AMD is keeping the XTX revision to themselves for now. This result could be a leak from some of the AIBs, so it could not be the final Big Navi performance. All of this information should be taken with a grain of salt.

#1
Woot i cant wait to see W1z's full review of these
#2
I just hope they have enough of these at launch ;)

There are so many people out there willing to buy, even lots of disappointed Nvidia fanboys and -girls that are tired of waiting and willing to turn to the red side.
#3
Firestrike Ultra. Nice, but it says nothing. The bench dates from what, 2013?
Why is there no Port Royal?
#4
So if the XTX silicon is only available to AMD and the leak is probably from a partner, that implies the leaked score is probably the XT. But I don't know if I dare hope the XT version is faster than 3080 that would be mad.
#5
lol again?

#6
kinda pointless, we have had cards in the past from AMD that beat Nvidia in these benchmarks but did less so in gaming.
#7
5700XT beats RTX 2080 in firestrike ultra :
www.guru3d.com/articles_pages/msi_radeon_rx_5700_xt_gaming_x_review,22.html

yet still slower than 2080 in actual games.Firestrike ultra favors too much to AMD cards.
#8
Why no Firestrike Extreme?
#9
Just got a super cheap 1080 ti and loving it! so price to performance I win :p
#10

MelvisJust got a super cheap 1080 ti and loving it! so price to performance I win :p

Unless you got that GPU for less than 200-250 I strongly doubt you've won, as you're also missing a huge feature set by now.
#11

tiggerWoot i cant wait to see W1z's full review of these

i dont think they will get the card
#12

Vayra86Unless you got that GPU for less than 200-250 I strongly doubt you've won, as you're also missing a huge feature set by now.

Vayra86Unless you got that GPU for less than 200-250 I strongly doubt you've won, as you're also missing a huge feature set by now.

Damn yes with those aus prices thats a whole other ball game,
#15

Vayra86Damn yes with those aus prices thats a whole other ball game,

how much more clocks can AMD squeeze outta the silicon before its release I wonder :D
#18
Its looking good.

Hopefully all is true. Its about time AMD/ATI had an ace up their sleeve.
#19 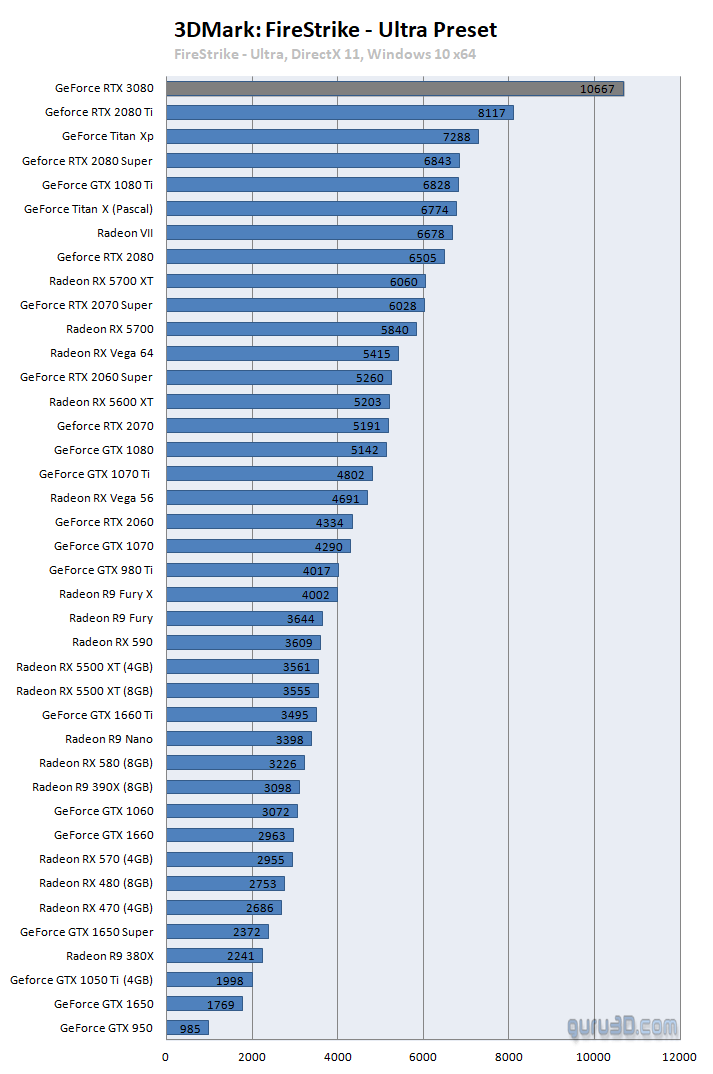 I would say it favors AMD a bit more, around 10% extra performance compared to nVidia. So lets hope that this is a real like and this is Navi 21 XL, because that would mean the performance would be similar to the RTX 3080.
#20
Seeing the prices in AUS, now I know the meaning why everything is upside-down in the "land down under" :O

Still, waiting for benchmarks and reviews :)
#21

yet still slower than 2080 in actual games.Firestrike ultra favors too much to AMD cards.

It's not about favoring AMD cards, it's an old benchmark that everyone heavily optimized for it.
Actual games need people from AMD getting involved and this means money.
Amd might have a better card but if it's not used properly even a midrange card from Nvidia can beat everything AMD has and this actually happened with with some games with vega64.
#22

how much more clocks can AMD squeeze outta the silicon before its release I wonder :D

You can't compare cards from 2 different makers in this benchmark, only same maker and same generation of card will give good performance indication.
From what I see Ampere and Turing are close enough that comparing 3080 to 2080 Ti score make sense, here 3080 is 31% higher score than 2080 Ti, which is pretty close to actual performance differential between the two.
If RDNA2 is close enough architecurally with RDNA1 then this would give "close enough" relative performance to 5700XT

A DX12 benchmark like Timespy would be a better performance indicator, but of course AMD wouldn't want people to know how Big Navi would perform just yet :D
#25

PerfectWavei dont think they will get the card