Press Release by
VSG
Dec 3rd, 2021 14:22 Discuss (35 Comments)
AZZA, a leading brand of computer cases and accessories, introduces the REGIS 902. This luxury case is uniquely designed with a cube form factor, elevated above the surface by a premium aluminium stand, and has an infinity mirror addressable RGB front panel. The exterior is complemented with black tinted tempered glass panels and two brushed aluminium mesh panels with a touch of gold trim on the edges. ATX motherboard compatible, the REGIS supports up to 336 mm long GPUs and dual 240/280 radiators.

The REGIS has 3-sided black tinted tempered glass panels, two sides for displaying the system, and the front for featuring an infinity mirror addressable RGB which uses an ultra-thin lighting module. The addressable RGB can be controlled via the case button, or synchronized with any motherboard software. At the bottom, two anodized and brushed aluminium panels with large mesh openings complete the frame of the Regis. Each panel is mounted on snap pins for tool-less removal. In addition, golden trims on 4 of the edges highlight the luxurious look of the cube.

A Stand that Elevates
Meticulously designed, the CNC milled 8 mm thick aluminium stand secures the REGIS in place at 45 degrees and elevates the case 175 mm off the surface (at the highest point). This unique positioning allows the REGIS to be showcased from all angles. It also gives the REGIS a reduced footprint and improves airflow with two mesh panels for air intake from the bottom of the case.

High-end PC Ready
Capable of supporting full mini-ITX, mATX, ATX motherboards, and ATX PSU, the REGIS has enough clearance for 210 mm tall CPU coolers, 336 mm long graphics card, and up to 2x 240/280 radiators which can be first mounted on removable brackets outside of the case for ease of assembly. The REGIS also holds up to 2x 2.5" SSDs or 1x 2.5" SSD and 1x 3.5" HDD which can be placed in trays and mounted in multiple positions. The REGIS includes a 140 mm PWM fan pre-installed at the rear and a PWM/ARGB hub which connects up to 7 ARGB devices and powers 6 PWM fans.

#1
That rear fan grill has more grill than holes
#2
I like the style but a full ATX case is a bit large for this form factor. Maybe Micro-ATX at most or Mini-ITX preferablly if we still have ITX-sized video cards in the future.
#3
400 USD? Ouch.. what CNC shop do they use? I think they are paying too much for machine time :D
#4
SO............

Take a box, mount it on it's back corner on a somewhat cool looking stand, slap on some gold trim, and expect us to pay $400 smackeroos for it......

Gmr_ChickI was dead-ass laughing at the name of this thing for 5 minutes. I mean...Regis? Like Regis Philbin? :roll: :roll:

Caring1It's Latin, and apt if you have G.Skill Royals ;)

Gmr_ChickI do, but they're the silvers, rather than the golds :(

You filthy peasant
-cries in black sticks-
#11
Whoever designed that fan grille needs to be shot.

AusWolfSo it's a standard cube-shaped case that you can stand on it's edge. OK, but why? :wtf:

Maybe. Or how cool gymnastic movements you have to perform to connect your cables to the back.
#16

AusWolfMaybe. Or how cool gymnastic movements you have to perform to connect your cables to the back.

or the magical wizard you need to get air to leave that stupid exhaust
#17
Weird looking Thermaltake V21. Internals are basically the same.
#18
Looks to be more of a novelty case that takes up a lot of extra space rather than anything practical. I don't ever see something like this being available for anything bigger than an ATX board.
#19
Wow. Okay.
The pyramid cases and 'illuminati-themed' builds don't have anything on this Saturnian Black Cube.
#20

Dremel must have co designed it to sell more product.
It might look ok if you use the base to attach to a wall to save space.
#21
nope for the base, just the case
btw it just me or the case looks like 3D printer?
#22
Double the width of a standard full atx case and it only has spot for a single 3.5 and two 2.5 drives?
#23

destruyaScale it up to EATX and we'll talk. I want something that screams "I'M SINGLE" to anyone who sees it.

If thats what you want, I'd look elsewhere because in spite of its "infinity mirror" and rather poor design choices, it still somehow looks classier than a lot of the teen gamer RGB stuff.

edit: This is what you need ( ... and maybe what we as a species all need, if we are truly honest with ourselves)
www.amazon.com/AZZA-CSAZ-807-Overdrive-Innovative-case/dp/B0915WGNQY/ 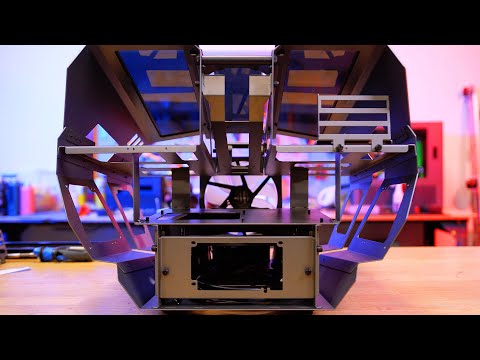