They achieve this through several unique features, including:The Perfect Answer to Gaming Needs
Boasting a stylish design that comprises daring lines, a futuristic Hybrid Cooler and a black circuit board, the ASUS ROG EAH4870 MATRIX and EAH4850 MATRIX can instantly be identified as pieces of top-notch gaming hardware. The ROG logo prominently emblazoned on the cooler is a mark of ROG's promise that these graphics cards will deliver extreme gaming performance. Both cards are equipped with the ASUS Super Hybrid Engine, Hybrid Cooler technology and iTracker, enabling 15% and 17% performance boosts in 3D mode while guaranteeing 54% and 28% less power consumption and much quieter cooling in 2D mode- fulfilling the varied needs of gamers.

Auto Hardware Detection and Adjustments with Super Hybrid Engine
ASUS' exclusive Super Hybrid Engine (SHE) technology showcases its intelligence via a two-fold process. First gathering detailed information about the GPU loading and temperature, memory and power IC; SHE then calculates an optimized solution for the best performance. All of this happens in real time, without requiring any tinkering from users-making it easy to achieve multi-level GPU and memory voltage adjustments for the ultimate graphics performance or maximum energy savings.

Hybrid Cooler for Auto-managed Proactive Cooling
The most intelligent and innovative GPU thermal solution today, Hybrid Cooler draws its inspiration from Hybrid cars. By combining the fan and heatsink on one card in a revolutionary way, the Hybrid Cooler delivers its targeted level of performance in the most energy-efficient manner possible. When required, the fan and heatsink will work together for optimum cooling. Fan speeds are automatically determined via the world's only advanced GPU loading detection, providing users with proactive cooling and greater energy efficiency in the event of lower graphics utilization-much like Hybrid cars. In addition, the ASUS ROG EAH4870 MATRIX comes with the dual-fansink Hybrid Cooler+. The dual fansinks take good care of not only the GPU but also the Power ICs and memory modules to prevent overheating. The speeds of both fans are also automatically adjusted to offer extreme cooling under 3D mode-lowering GPU and Power IC temperatures by a whopping 7°C and 12°C in comparison to reference design boards. On top of this unprecedented cooling capacity, the noise level of Hybrid Cooler+ is only 36dB versus generic designed fansinks that produce 59.3dB-catering to users who require maximum cooling but without excessive fan rotation noise.

Up to 54% Power Saved and Quiet Cooling in 2D Mode
In 2D mode, when less power consumption is required, the ROG EAH4870 MATRIX and EAH4850 MATRIX are able to reduce GPU and memory voltages from 1.316V/1.52V down to 1.1V/1.353V; and from 1.245V/1.979V to 1.15V/1.9V respectively for great energy savings. Furthermore, Auto Phase Switch technology optimizes the power supplied by the power phase for maximum power efficiency. In combining the exceptional voltage reduction with Auto Phase Switch technology, the ROG EAH4870 MATRIX and EAH4850 MATRIX's power consumption are lowered from 72.02W to 33.53W and from 51.36V to 36.99V respectively-an astonishing 54% and 28% in power savings when compared to any other reference designed board. Additionally, both Hybrid Cooler+ and Hybrid Cooler will help reduce fan rotation speeds in 2D mode, allowing users to enjoy much quieter cooling for comfortable computing environments. 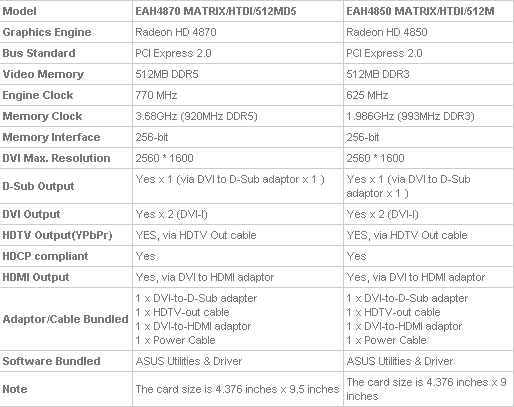 These cards use some pretty interesting features and they look great. IMO they will be top of the line in there respective category, wich is why I ask, why not 1Gb?
#4

Para_Franckwhy not 1 Gb on such high end hardware?

These cards use some pretty interesting features and they look great. IMO they will be top of the line in there respective category, wich is why I ask, why not 1Gb?