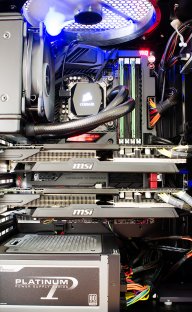 System Specs
The winnoot98 has drivers for keyboard I believe from memory.

Try once Moar's method and use the code I provided.

astrix_au said:
The winnoot98 has drivers for keyboard I believe from memory.
Click to expand...

They do, just that for some reason, I guess they weren't loaded when using the CD boot method or maybe because Nero uses a different DOS system?

astrix_au said:
Try once Moar's method and use the code I provided.
atiflash -p 0 H3.rom
It says if your original rom was H5 you can only use the 1-10 series such as H8 or H3 and not H50. If your bios was H55 you could use H51. It says that in red on the page you linked.
Click to expand...

It's F, not H. Well my backed up BIOS was F3 not F1 so I guess I can use it? So that's why I downloaded the F5 instead of the F51 but afterwards I realized they showed different mem clock speed 4500 vs. 1125 and was thinking - oh crap did I use the wrong one? Is that why my card's now bricked?! Because before I did all that I had GPUZ check the stats before and showed mem clock speed 1125MHz. That's why.

Anyways, I managed to successfully, yes successfully, un-brick my HD 7750 using Moar's *new* method! After doing some more research on the net, I came across this thread:
http://www.overclock.net/t/593427/h...ics-card-fix-a-failed-bios-flash#post12188574

There was also another method, a more of a *last resort* method mentioned somewhere on page 4 or so but luckily that was not needed. You guys can look into it if said method in first guide doesn't work.

So these are the steps I did to make it work again, in this case I am attempting to re-flash it with the original BIOS from the actual card I, luckily, backed up:

- Do Moar's method of creating a bootable USB drive, and copy over the necessary files for the flashing process
- Grab a PCI graphics card, yes a PCI graphics card - luckily I have two lying around in the house, but only one was still working for me, the other one I guess is either dead or not compatible with the motherboard (It was some no name brand I don't even know if it's nVidia branded or ATi/AMD branded - hell it works, so I'm happy

!)
- Insert card onto board, with power off and power cable unplugged obviously - try to insert the card into the first PCI slot if possible like so in the image below as it is right next to my HD7750, otherwise it won't boot from your PCI card and you'll just see nothing:

- Go into BIOS and under the video configuration change either Auto to PCI or PEG to PCI graphics card as primary video output
- Make sure BIOS is set to boot from your USB boot drive or FDD if you're using that method
- Save changes, reboot and then power off
- Insert HD 7750 into PCIe slot
- Switch power on and boot from either the USB boot drive or FDD
- When fully loaded type in "ati4 -i" without the quotes to find out which number your HD7750 is and some other details
- Then type in "ati4 -p 0 f3.f3" without quotes and flashing should take place
- After that is done, it request to successfully complete vBIOS flash is to reboot as seen in the image below:

- Rebooting done and your HD 7750 should now be un-bricked!

Of course I wanted to give it shot anyways and tried to flash to F5.F5 BIOS from the original Gigabyte website but it says P/N mismatch or something like that as seen in image below:

I guess the BIOS I downloaded from their website isn't compatible?

Oh well it works now that's all and I'm glad! Phew after almost a days work just trying to figure this out!

As a side note and a bit of info, I thought I might add these in below.

Law-II said:
[Note: **when booting from onboard vga / igp = primary position 0]
Adapter Information
atiflash -i 1 [this will show card if it is at second position 1]
[*rename to .bin if this is not a typo]
Click to expand...

See Law-II confirmed it too.

Actually, correction there - my F3 extension worked so it's not entirely restricted to .bin and .rom files exclusively and even was mentioned in the video astrix_au pointed out.


Howcomes said:
Anyway, Provided you can get into DOS and get the tool running correctly this is when you'll run into the 'Adapter not found' and Error 0FL01 messages. Which is probably what brought you here which is probably where your at. [just being thorough, i want others in this situation to be able to revive their cards!]
!!INTERGRATED/ON BOARD VIDEO DISABLES YOUR AGP SLOT!!
Unfortunately this was the case for me, not sure if its like that for everyone, but...logic tells me it would be. You may have read that you can revive your card by reflashing with a PCI card. However PCI Cards are quite old and not really the mainstream anymore, Lucky for me, I had one lying around

So to revive an AGP Card you need a PCI card, ANY PCI card.
Click to expand...

According to this guy over there: http://www.techpowerup.com/forums/t...r-not-found-error-0fl01-x1950-agp-used.45784/ (which is where this quote was pulled out from) , onboard video *may* disable any externel graphics cards. So this is probably why I'm getting the error "Adaptor not found" and hence cannot continue.

*edit* I can confirm in my situation that when using IGP/onboard video, it disables PCI and PCIe access but when I use PCI as my primary, I can do "ati4 -i" without quotes and it would list the adapter's details. Just tested it with my other computer that had onboard video with both PCI and PCIe slots available.

Oh well, I switched from the spare PC I was using this on, to the PC of origin that this HD7750 came out of after I discovered that you can use an external PCI graphics card. And that fixed it for me.
Last edited: Oct 13, 2014
E

I did a USB stick and can't boot up from it with the bricked card inserted. The stick lights are just turning off, but it works using IGP. So I decided to try your CD method. I did everything you showed, but I can't find the atiflash and BIOS files when I boot from it. The files are written on the CD tho: http://i.imgur.com/CHNIjxF.png

So why are these happening?


EdKode said:
So why are these happening?
Click to expand...

Files are in wrong folder;
Example 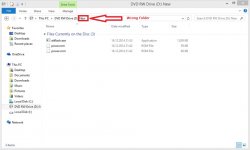 These files should be in the ROOT of the bootable CD media
D:
atiflash.exe
[#VbiosName#].rom

Files are in wrong folder;
Example
View attachment 60965
These files should be in the ROOT of the bootable CD media
D:
atiflash.exe
[#VbiosName#].rom

The files are in root. That 'New' is just the name of the CD, not a folder. I noticed that I get an error 'MSCD001 driver not found' and I found people on other forums that had the same issue which can cause that the files on the CD to can't be found. Does anyone know any fix for this?
Last edited: Dec 17, 2014

Spectrobozo said:
the story is not that simple, I didn't change any ID, something wrong happened when I tried to flash the ORIGINAl bios back in the vga (don't ask me what, I just flashed the bios and restarted the PC), I tried to "reset" the bios chip since the card was not detect anymore... now it is detected but atiflash cant write the bios... but I will try again the trick to make contact between the pin 1-4 of the bios for more time, as I was advised to try.

but thanks, nvflash have the -e command, I tought that atiflash had something like this, but doesn't look to be the case!
Click to expand...

Never Buy Stuff from Bad Manufacturers without right Technical Support or Something, but!:
U can Solve The Problem Like in This Video:

System Specs
Hi to all,
Iknow that this thread is rather old, but maybe someone can help me though!

I tried to upgrade my saphire radeon hd7950 but I didn't succeed.

Here is what I did:

I made a bootable USB Stick with the software from the op.
Copied atiflash v 4.17 onto it and also
Sapphire.HD7970.3072.120628.rom
Booting this USB-DOS and flashing with

gave me this error

So, what went wrong?
Wrong bios?

Can someone help me, please

System Specs
Thought i would necro this thread ,since its number 1 in my google searches.