Free Game Alert: Ubisoft's STEEP is free on Uplay, until May 21st

Updated by
AleksandarK
May 17th, 2019 09:54 Updated: May 18th, 2019 10:27 Discuss (25 Comments)
Everyone likes free stuff, so why not enjoy a free copy of Ubisoft's STEEP game? Today Ubisoft announced on their Twitter page that they will be giving away free copies of the STEEP, Ubisoft's game focused on extreme snow sports. It requires you to have a Uplay account to redeem it for free. After getting the game you will be able to keep it forever. But there is a catch. I, for example, can't redeem the giveaway as I am not from the US. The giveaway seems to be targeted at US users exclusively.

Update: Several users on TechPowerUp Forums are reporting that they have redeemed the giveaway without being in the US. It is global. There must have been a problem when I checked it out.

STEEP is game about snow adventures such as snowboarding and sky-diving. Launched way back in the year 2016, it still is a good software everyone should try out. So if you are from the US and want to try some extreme snow adventures and dive deep into the world's mountains without leaving the comfort of your home, you can check the giveaway here. The giveaway will last until May 21st when it will officially end. If you have redeemed the game before that, you will be keeping it forever.

25 Comments on Free Game Alert: Ubisoft's STEEP is free on Uplay, until May 21st

#1
Nice, think I'll grab this and give it a try, not played a good snowboarding game since 1080 snowboarding on the n64 :rockout:
#2
I'm not from US and managed to redeem this without problems
#3
Steep from my experience is really really fun. Spent maybe 100 hours trying to beat challenges and freeroam
#4

Is this one where you really need a controller or does it have decent kb/mouse support?
#5

NdMk2o1oIs this one where you really need a controller or does it have decent kb/mouse support?

Not gonna impair myself with a controller. Had no issues using KB\M
#6
That's not a very steep price then.

aktpuI'm not from US and managed to redeem this without problems

Same here. :)
#8
The U.S. requirement seems superbly strange, since Ubisoft has its headquarters elements in Montreal (Operations) and in France (Administrative).
#9
Same, uk and redeemed fine.
#10
"It requires you to have Uplay account a Uplay account"
Two accounts? :laugh:
#11

Thank you very much for pointing that out! Its fixed now.

For anyone redeeming the code and is not from US: Thank you very much as well.:) Article is updated
#12

AleksandarKFor anyone redeeming the code and is not from US: Thank you very much as well.:) Article is updated

Haven't seen any code, I just logged into Uplay and was able to add the game to my library.
#13
A shame, but graphically this game is underwelming....
#14

As soon as I could start playing I turned 180 degrees and started walking uphill. :D It's fun and it runs nice and smooth on my rig. I was a little thrown off by the controls at first though I figured it out. I requested a GrayStillPlays video, hopefully he will and in the process set a new world record for human-tree relations. I'm grateful for a game like this to play, I'm stranded in Florida for the time being and can't wait to go skiing in real life again on a permanent basis.
#18

Way to be grateful for getting a free video game. How many thousands of hours of hard work went in to creating the game? Little over a century ago you would have been lucky to have had electricity.
#20
Free is free, so no complaints from my end.
#21
Alway wanted steep, got it! 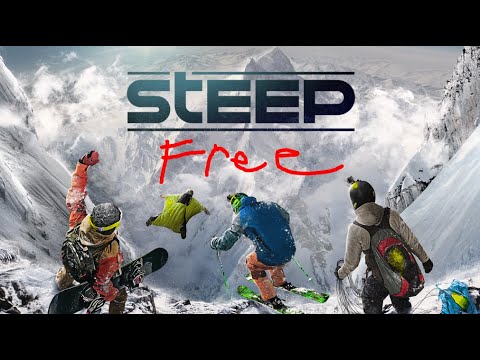 #22
This is a really fun game and I can finally put my wingsuit/parachute skills (such as they are) to the test, that I learned in Just Cause 3 .
This is definitely a keeper and don't listen to the naysayers, the graphics are quite luscious.

My first wingsuit flight where I die a number of times.

JAB CreationsWay to be grateful for getting a free video game. How many thousands of hours of hard work went in to creating the game? Little over a century ago you would have been lucky to have had electricity.

I bought it a year ago at full price because I love the Alps, skiing, etc. So stuff the 'be grateful' demands. lol. Barely played it. Of course others will like it. Once you have played high detail games it is hard to go back (for me). Enjoy it! :toast:
#24
Never heard of this game 'till reading this.
#25
www.epicgames.com/store/en-US/product/last-day-of-june/home