by
btarunr
Feb 15th, 2021 20:15 Discuss (15 Comments)
TechPowerUp today released the latest version of ThrottleStop by Kevin Glynn, a handy utility that lets you take greater control over the power-management features of your processor, so you can prevent it from unnecessarily throttling. This is particularly useful with notebooks that have aggressive CPU throttling. With the latest version 9.3, ThrottleStop introduces support for Core i9-10900K and i9-10850K processors, including a new Turbo Group access window.

The Turbo Power Limit controls have been updated with a toggle that lets you disable TPL control, along with the ability to clear TPL Lock options. The ThrottleStop Bench and C-State windows have been updated for 10th Gen Core processors. Other improvements include limit reasons for 10th and 11th Gen Core processors, improved access to Windows internal power plans, access to the PROCHOT offset variable, AVX offset control for Unlocked K-series processors, reporting and logging of Thermal Velocity Boost and Vmax stress. Several other UI changes were made. Grab ThrottleStop 9.3 from the link below.

#1
With a AIO water cooler my CPU is very unlikely to be throttled
#2
Thanks @unclewebb. Awesome!
Love the new TPL window.
#3

Me too. It is a thing of beauty compared to the previous one.

It is also more functional. The MSR Turbo Limits data is being updated in real time. If you check the Disable Power Limit Control option, now you can watch this data to see if any other software on your computer is changing the power limits without your knowledge. I think MSI Dragon Center has a bug where it is "accidentally" setting the turbo power limits to 0. This can cause some severe throttling, especially if the Clamp option is also enabled. I have seen a lot of computers with this problem during the last few months. This new feature should help out with troubleshooting.

Just need to get the radio buttons up at the top hooked up and working. It is at the top of the things to do list.

Edit - Almost forgot. The new TPL window also makes it easier to see when the BIOS has locked one of the power limit registers. 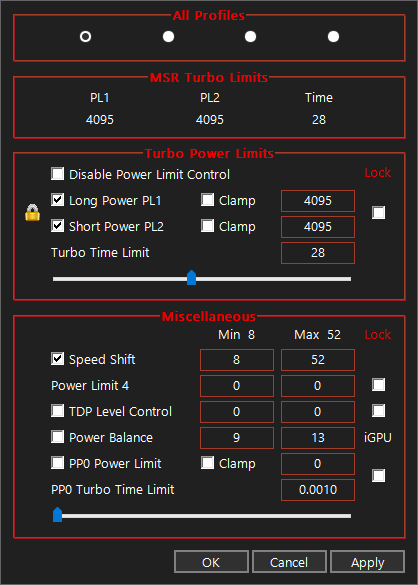 So why are you posting? Who cares?
#5

That is factually incorrect. Throttling in this context isn't due to temperature, but due to a lot of other factors, like power, current, etc
#6
DarthSide of the TPU...with dark force comes dark responsibility...
#7

W1zzardThat is factually incorrect. Throttling in this context isn't due to temperature, but due to a lot of other factors, like power, current, etc

I run my processor at stock clock as stability is more important but the BOIS has a hotrod feature which is where the water cooler along with 1000W makes sure the CPU runs fine
#8
Why is the i5-9300h ark.intel.com/content/www/us/en/ark/products/191075/intel-core-i5-9300h-processor-8m-cache-up-to-4-10-ghz.html?wapkw=i5 9300h

ThrottleStop simply reads this information from the CPU. If a CPU does not support Thermal Velocity Boost then having this setting checked or not checked should not make any difference.

Intel creates a wide range of CPU models by enabling and disabling various features. It is likely that your CPU originally had TVB but it was disabled when Intel decided to call it a 9300H.
#10

I bet you don't know how ThrottleStop works. Just a hint - it's not about the clocks or multipliers in the first place.
#11
Hi
i'm getting FIVR-Locked with this version 9.3. All options there are in grey color.
With versions 8.6 - 8.7, i have no problems
With version 9.2, 9.3 i can't activate GPU Temp icon in notification area
my Laptop ASUS G530GW intel i7 9750H

Before you can turn this feature on, you have to enable Nvidia GPU monitoring in the Options window.
Not everyone wants to monitor their GPU so this is an optional feature.

#13
FOA, thanks for your answerer!

So, i got the GPU icon back, good. But the offset doesn't change at all even in the old version 8.7. Even though, Throttlestop is working because the temps keep low while de app is running. 0.o
#14

zoothe offset doesn't change at all

Exactly. The BIOS has locked CPU voltage control on your laptop. This is a common issue. Do a Google search for Plundervolt. This is the reason why Intel released an update to disable voltage control.

zooEven though, ThrottleStop is working

ThrottleStop is working. You can adjust your CPU speed but you cannot adjust your CPU voltage if your CPU is locked. That is what ThrottleStop 9.2 and 9.3 are telling you.
#15
Ok the problem was fixed. I Just downgrade the BIOS and delete de firmware update file in Windows/firmware folder and now i got the undervolting options back again.

I don't have AXD, SGX SDK installed, so i think i'm save about Plundervolt.

@unclewebb, thank for you help my friend i really apretiate it! :)

We never stop learning something every days :)
Add your own comment
Apr 13th, 2021 05:08 CDT change timezone
Sign in / Register