You work on new rev patch ?

You work on new rev patch ?
Click to expand...

It's a great news for all users of your hack !

When will you publish it ?

Currently using this to have fun with my UD3P running 6800GT's in SLI.

I just thought I'd pop in again after some time now and say THANK YOU Anatolymik! You'll be a legend always for doing this!

My system is still running perfect SLI'ing after a number of months now, I've upgraded from 2x GTX 260+ to 2x GTX 285! Everything has been sweet. I'll upload some benchmarks just to show off a bit.

anatolymik said:
i was busy a little. now i'm going to test a new method
Click to expand...

What do you have in store for us in this new method?

Goonit said:
What do you have in store for us in this new method?

the new method still has no luck. too bad but i have a lots of work. plus i'm working on remake of Sierra game (Mask of Eternity, my girlfriend loves this game very much), and modding existing to get it works on windows 7. as for new method i think i'll make it for sure. just give me more time friends.

Hi Guys.
I have tried following instructions from the following url: http://xdevs.com/e107_plugins/content/content.php?content.30
But unfortunately did not manage to get SLI working on my PC.
The SLI option does not show in the nv control panel and Everest does not show a SLI certificate under ACPI/DSDT.
Anyway, I am starting to think that my mobo cannot run SLI.
My Specs:
Windows 7 Ultimate 64-bit
Intel DP45SG
2x GeForce GTS 250 (1GB)
750W PSU
Intel Core 2 Quad CPU Q9550 @ 2.83GHz
Do you think it will work?

Thanks in advance.
S

Ok, I just realised that my motherboard should be able to run SLI because it is part of the P45 series. It is just a matter of getting the software right. Another thing that I would like to know... I only bought my second GeForce GTS 205 a few weeks ago but it is not the same as the original one. They are both GeForce GTS 250's with 1GB of RAM each, but the one is a gigabyte and the other a Galaxy (some japanese make). Will this setup work or am I wasting my time to try?
Gracias. 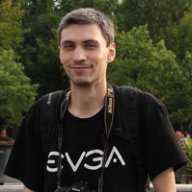 System Specs
Who will be first to try hacked SLI with GTX470/GTX480?

Yay! I managed to get SLI enabled on my pc just now!
Going to test it asap.
Thanks to Sveetsnelda and anatolymik.

Why not look at it this way: When will SLI GTX260 get slow ? Can't see need for such SLI yet. I visited the HD5800 series bench thread...3DM06/Vantage numbers didn't impress me (and yes, I'm looking at the FPS, not the meaningless points), my SLI 260s should last long...but I'm tired of them already LOL

I have a problem with my Rampage Extreme X48 motherboard and 2x GTX285. Seems like only 1 card is really running on system, but SLI is enabled. I don't know what can I do.

MasMe said:
I have a problem with my Rampage Extreme X48 motherboard and 2x GTX285. Seems like only 1 card is really running on system, but SLI is enabled. I don't know what can I do.

System Specs
English only on these forums please.
O

Mussels said:
English only on these forums please.
Click to expand...

Sorry. I think I know this user from another forum, so I answered him in Spanish, so I can better help him. Anyway, you're right, and again, I'm sorry for that.
M

In Battlefield Bad Company 2 I have a high performance right now, but isn't an SLI.

What happens if right now I install directly the SLI Patch 0.7a, reboot and enter into Win7 SLI-Enabled and install 197.13? I'll have any patch issues or something like this? If I enter into Win7 normal system I'll have all that I have it right now right? I mean, a system with SLI String and Halmod.

Thanks to all.
M

Now I must to know how to check if SLi is enabled in games. I'll try EVGA SLI Enchancement Patch
Last edited: Mar 28, 2010
H

If a understand this correctly i can use for my gigabyte X48-dq6 string :

Is string ok ? any expirience with custom strings ?

Can I enable sli only with (without any other patcher or similar):
1. SLI string injectet directli into bios dsdt
987134512781Genuine NVIDIA Certified SLI Ready Motherboard for GIGABYTE GA X48-DQ6 8432-Copyright 2008 NVIDIA Corporation All Rights Reserved-765289891023(R)
2. hal.dll , halsli.dll moded files depending on driver version i use

Hazzard007 said:
If a understand this correctly i can use for my gigabyte X48-dq6 string :

Is string ok ? any expirience with custom strings ?
Click to expand...

yes i use, but i want use sli without this patch string in bios+halsli.dll if possible
Last edited: Mar 29, 2010
E

I've attempted to do this (all weekend) on my P55A-UD3 and have not succeeded.

The closest I have gotten is seeing SLI enabled, however all processing hits GPU#2 and GPU#1 just hangs out. In most cases I don't even see SLI enabled.


The documentation indicates 2 methods and I have tried both of them. It clearly states "one or the other" however the ONLY time I get SLI to appear enabled is when both are config'd and that is when I get everything running on GPU#2.

I installed two videocards into motherboard, tried everything, but SLI don't appear
A: If you have old motherboard, based on mainstream chipsets like P965, P35, P45, P55 with lack of PCI-express lanes, you should check, which host feed PCI-Express slots for GPU's. For example if you have first PCI-E connected to northbridge PCI-E link, and second one connected to PCI-E from southbridge, then SLI can't be used. Graphics cards should have same host for SLI. For example, we tried three 8800 Ultra's on DFI UT P35 mainboard, but SLI enabled only for first two cards. On this motherboard, third GPU was connected to x1 PCI-Express of southbridge, no matter which slot size is. You can see this by looking pairs of traces from PCI-Express slot running to bridge.

Also check if SLIC certificate installed properly. To do this download latest version of Lavalys Everest diagnostic tool, and open section ACPI/DSDT there. You should have correct string in "SLI Certification". If there is "Not present" then try SLI patch install again.
Click to expand...

They then provide a link to a screenshot of a system showing the DSDT edit
http://www.xdevs.com/sli/sliev.png

This is where my setup differs-- I NEVER see that DSDT edit no matter how many attempts or different methods that are used.

I was concerned that the configuration of my mobo may be causing the problem (1x pcie@x16 1x pcie@x4) but have found via the loveliness of google other users which have gotten this working on boards with identical lane layout, though admittedly I can't find a single person who has gotten this working on a P55A-UD3. I have attempted going back in BIOS versions (from F6 to F4) but this has not helped.


I have tried this on 2 Windows installs and have a backup for safekeeping so any suggestions no matter how silly/dangerous will be tried!
H

I'm digging through this thread (damn it's long

SLI is enabled! And I'm getting usage from both GPU's! Primary focus seems to be on GPU2

The downside? I'm getting worse performance (L4D2, Borderlands, BF:BC2) in SLI than Single GPU currently. 3d Mark gives me a higher perf# actually! 14712 in SLI // 13860 Single.
Any suggestions out there will be GREATLY appreciated!
Attempted 191.07 drivers - Same performance as 190.62.
Currently running without an SLI Bridge. I'm working on acquiring one now.

This has resulted in another 'SLI Enabled' configuration, however now I believe I am seeing the real problem - it appears to be running on 1 GPU again, this time it's reporting GPU1 @ 30-40%, GPU2 @ 0. My very first attempt at performing this mod resulted in the same behavior. After a clean install, a clear method outlined earlier in the post I was able to get SLI enabled and saw work from 2 GPU's despite not reaping the rewards. I still believe I need an SLI bridge before I can draw any conclusions.

I'm curious if the SLIPatch Method has better performance gain? I still need to determine why the DSDT segment isn't inserted when I attempt to use this method.

) and installing 196.21 drivers then trying to install SLIPatch but this has not inserted the proper segment into my DSDT nor has my board ever reported as being an X58 in CPU-Z. I believe my ACPI 1.0b board may be to blame.


Just removed SLIPatch and installed Halmod .9a, SLI still enabled even through reboot. GPU2 now appears to be working and GPU1 is showing the same 30-40% usage as it did when the system appeared to be on only 1 GPU. It's like the GPU's are working but aren't working together. I'm thinking an SLI bridge is going to unlock this puzzle.
Last edited: Mar 30, 2010
You must log in or register to reply here.
Share:
Facebook Twitter Reddit Pinterest Tumblr WhatsApp Email Share Link
Top