by
btarunr
Mar 31st, 2014 03:06 Discuss (48 Comments)
Over the past couple of weeks, AMD is guerrilla marketing its next flagship graphics card, the Radeon R9 295X2 on Twitter, under the hash-tag #2betterthan1. The first couple of pictures posted over the weeks were, well, typical AMD, showing us abstract everyday objects to drive home something meaningful. The latest one gives us more to chew on. It shows the outline of a rectangular object with a circle in the middle, and rivets lining its edges, something which we most identify with full-coverage water blocks. Could the R9 295X2 be a liquid-cooled product? We'll have to wait and see. Meanwhile, NVIDIA torpedoed AMD's plans by launching the GeForce GTX TITAN-Z earlier this month. The downer? A $3,000 price-tag. Even if AMD falls short of performance by a few percentage points, it could make NVIDIA look bad, by giving it a much lower price.

#1
lol liquid cooling that's why I don't buy amd gpus !!
Nvidia all they way :)
#2
I don't know about any solution that is capable of air cooling two Hawaii GPUs on a single card. Water cooling is the only inexpensive 24/7 solution. You could go cryogenic if money is no object.
#3
Hi Mr.ARESII, what’s your opinion about your brother 295X2？
#4
You are a special kind of idiot. aren't you?

I'd rather buy a dual slot dual GPU that has exceedingly effective cooling, as opposed to a triple slot solution that sounds like a leaf blower for what could be $1000 less.

All that being said, I'd rather buy a powerful single chip GPU and then buy two of them if the performance was required. Dual chip cards are more a display of engineering prowess than an actual solution to somebody's performance requirements. I think I've met 1 person on the whole of TPU who owned a 7990, and one or maybe two who owned a 690. They become obsolete too fast.
#6
I dont see much ! AMD will rip the market for 2 months!:nutkick:Maxwell will be ready in May and for two months I do not see any reason to celebrate because I can say this cards to have any future it will be more fashion fad and should be given at least a year before!
LIquide colleng is the best. Existing air coolers on the powerful GPU cards has more or less stop-gap solution!! All air-cooled card I was ruined after two years of use not to mention room temperature !!!!:banghead: Some used here Koment for cet room but not for the actual evaluation:shadedshu:
#7

Nobody cares what you think.....and you must be young and/or inexperienced because Nvidia have always had the more hotter GPU except for the last generation.
#9
TITAN-Z is not even meant for gaming so why do you ppl even compare it with the above card which will clearly be a gaming card?
#10

RejZoRTITAN-Z is not even meant for gaming so why do you ppl even compare it with the above card which will clearly be a gaming card?

Probably their ability to read...
#11
Some impressive trolling there @mroofie , a 57% hit rate ( 4 strikes in 7 posts). Form like that should get you a call from SemiAccurate if you enter free agency.

On a more serious note, I wonder if the shroud designers are taking styling cues from the GTX 690. The AMD render(?) seems to be using the 135°/45° angular styling lines + oversized securing points that gave the Nvidia card its industrial feel.

XzibitProbably their ability to read...

...or you could look at the other half of the marketing... 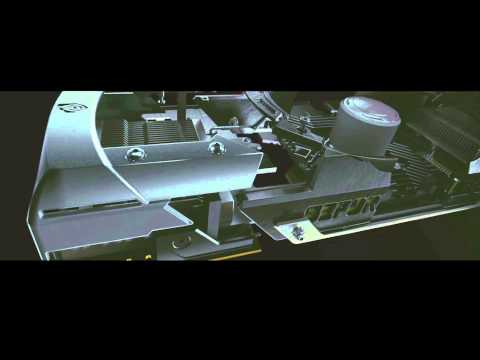 ...and reach the conclusion that the company is targeting both gaming and GPGPU...probably the same reason that the card was launched at a GPU Technology Conference rather than a gaming event. If GTX Titan's are being sold as prosumer cards then it isn't that much of leap to think that the Titan Z will do likewise.

Personally, I'd suggest that the Titan Z might replicate the original Titan marketing. Grab a few sales via the halo effect, and when the hubbub dies down, Nvidia launch a more gaming friendly (price vs features) version - a cut down GTX 790...just as Nvidia did with the GTX 780 after the Titan debut.
#12

On a more serious note, I wonder if the shroud designers are taking styling cues from the GTX 690. The AMD render(?) seems to be using the 135°/45° angular styling lines + oversized securing points that gave the Nvidia card its industrial feel.

Somebody needs to deal with these new users and teach them the wise ways of "How to not make your first 100 posts make you look like a tool".

Eroticus1500 $ it's already over priced price

dont speak too loud bro... there is a possibility the titan z buyer will throw their GPU away to our face ,LoL :laugh:
#18
Releasing this card water cooled is fine as long as it is release with a real waterblock and they let you add it in to your custom loop. If they release it with one of those all in one water cooling hybrid systems.....I think that would suck.
As long as they would do that (If they have to in order to control the thermals) I am fine with it. And I will buy one!
#19

XzibitProbably their ability to read...

Then i must have missed the point of 1 hour presentation of Jen-Hsun wasting his breath on talking about scientific computation done on Titan-Z...
#20

RejZoRTITAN-Z is not even meant for gaming so why do you ppl even compare it with the above card which will clearly be a gaming card?

Geforce is their gaming brand, if they wanted to aim it at professionals they would have called it quadro
#21
Not in the market for a new card anytime soon but am really interested to see how this one turns out. And also how it will perform vs a 790 , and how they price it. Announce it already :)
#22

progsteGeforce is their gaming brand, if they wanted to aim it at professionals they would have called it quadro

The reveal video specifically has the words "...if a guy wanted a cheap compute server under his desk..." when referring to Titan-Z. It is designed as a cheap compute card.
#23
Wrong card at the wrong time.:ohwell:
#24
I think the 295x2 might be using the Hawaii Pro Chips, the one found in the non X R9 290.
Might as well wait for ARES III who will be using full blown chips.

That doesnt mean i dont want to see how the actual 295x2 looks like. To bad i have to wait more for that.
#25

RCoonI think I've met 1 person on the whole of TPU who owned a 7990, and one or maybe two who owned a 690. They become obsolete too fast.

Hey now....The 690 still beats a (single) titan in actual game tests. As long as you grab the flagship late & used for say 70% of retail, the price/performance can work out. I'm very happy I grabbed the 690 instead of a titan. I would not want it with air cooling though. :p
Add your own comment
Oct 23rd, 2020 20:40 EDT change timezone
Sign in / Register