Tape storage is currently the most secure, energy efficient and cost-effective solution for storing enormous amounts of back-up and archival data, as well as for new applications such as Big Data and cloud computing. This new record areal recording density is more than 20 times the areal density used in current state of the art commercial tape drives such as the IBM TS1155 enterprise tape drive, and it enables the potential to record up to about 330 terabytes (TB) of uncompressed data on a single tape cartridge that would fit in the palm of your hand. 330 terabytes of data are comparable to the text of 330 million books, which would fill a bookshelf that stretches slightly beyond the northeastern to the southwestern most tips of Japan.

Magnetic tape data storage is currently experiencing a renaissance. With this achievement, IBM scientists demonstrate the viability of continuing to scale the tape roadmap for another decade.

"Tape has traditionally been used for video archives, back-up files, replicas for disaster recovery and retention of information on premise, but the industry is also expanding to off-premise applications in the cloud," said IBM Fellow Evangelos Eleftheriou. "While sputtered tape is expected to cost a little more to manufacture than current commercial tape that uses Barium ferrite (BaFe), the potential for very high capacity will make the cost per TB very attractive, making this technology practical for cold storage in the cloud."

To achieve 201 billion bits per square inch, IBM researchers developed several new technologies, including:IBM has been working closely with Sony Storage Media Solutions for several years, particularly on enabling increased areal recording densities. The results of this collaboration have led to various improvements in the media technology, such as advanced roll-to-roll technology for long sputtered tape fabrication and better lubricant technology, which stabilizes the functionality of the magnetic tape.

Many of the technologies developed and used in the areal density demonstrations are later incorporated into future tape products. Two notable examples from 2007 include an advanced noise predictive maximum likelihood read channel and first generation BaFe tape media.

IBM has a long history of innovation in magnetic tape data storage. Its first commercial tape product, the 726 Magnetic Tape Unit, was announced more than 60 years ago. It used reels of half-inch-wide tape that each had a capacity of about 2 megabytes. The areal density demonstration announced today represents a potential increase in capacity of 165,000,000 times compared with IBM's first tape drive product. This announcement reaffirms IBM's ongoing commitment and leadership in magnetic tape technology.

No no, its real, I got the whole thing on tape
#3
I bet the access times are incredible!
#4
Funny I was just watching this 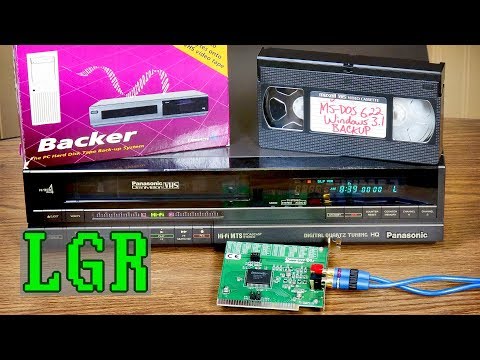 And damn you @qubit for showing me this channel. Wasted me quite a lot of time!
#5

Quite often at least few days. :)

Incredible stuff from IBM.
A good lesson for all the "enthusiasts" on this forum about how a proper innovation in computing looks like. :)
#6
They found mah mixtape
#7
its a single palm sized tape drive, I doubt access times are any worse than they used to be.

pretty useful for archival purposes, but it is seriously ironic that its used to store video...like we took this digital film and backed it up on film-like tape...
#8
LOL!! I posted this August 2....
www.techpowerup.com/forums/threads/ibm-scientists-have-captured-330tb-of-uncompressed-data-into-a-tiny-cartridge.235755/
#9

cbr12yes ...we now for what they need and who will buy from ibm that expensive research for that "hdd"... military and nsa . jusk ask snowden and julian A,.
ibm- no no its for peace , AI tech and other "science" ... of course ..:oops:;)

xkm1948Funny I was just watching this

And damn you @qubit for showing me this channel. Wasted me quite a lot of time!

lol, I know these videos are a bit morish aren't they? Watch just one more... ;) I watched this one and especially liked the bit showing what the data looks like visually.

I think this 330TB innovation is great, as it will be almost enough to store my complete pron collection. :D
#11
I have had people bring in old tape backups for recoveries still. They exist for a reason.
#12
Tape me out to the ballpar....nvm:kookoo:

I doubt this tape works for Commodore 64s or Vic-20s.

cdawallI have had people bring in old tape backups for recoveries still. They exist for a reason.

They are the most reliable storage device if managed properly.

TartarosThey are the most reliable storage device if managed properly.

tuandta2LTOs are one of the most important low-cost, high-capacity storage solution. Especially when you deal with a lot of big files e.g. video. I work for a television station and we have a whole rack room with several tape library. You'd be surprised to see many big companies are taking part in this industry: HPE, IBM, Spectra, Fujitsu, Toshiba ... No, by no means tapes are for enthusiasts. They go beyond.

I think astronomers use them for storing raw data, iirc.
#18

FrickI think astronomers use them for storing raw data, iirc.

Most scientific experiments use tapes - both for great reliability and high volume.
And actually tapes can't really be considered just a backup. In many cases data is written directly to tapes as a main storage - only the selected fragments are copied to faster disks for analysis.

Experiments are always sacrificing some data that is not stored at all - due to both transfer rates and storage volume. So making tapes 20x larger (and most likely faster) is quite important for science.

As for business uses - I don't think we're hugely limited by tape capacities today, so it's not a crucial invention for 2017. But obviously the amount of data is growing and the planet isn't. We need a safety margin for the future and that's what IBM delivered.
Add your own comment
May 25th, 2020 02:04 EDT change timezone
Sign in / Register