"We delivered our fifth straight quarter of year-over-year revenue and net income growth driven largely by the accelerated adoption of our Ryzen, EPYC and datacenter graphics products," said Dr. Lisa Su, AMD president and CEO. "Client and server processor sales increased significantly although graphics channel sales were lower in the quarter. Looking forward, we believe we are well positioned for further market share gains as we continue making significant progress towards our long-term financial targets."

AMD's outlook statements are based on current expectations. The following statements are forward-looking, and actual results could differ materially depending on market conditions and the factors set forth under "Cautionary Statement" below.

For the fourth quarter of 2018, AMD expects revenue to be approximately $1.45 billion, plus or minus $50 million, an increase of approximately 8 percent year-over-year, and non-GAAP gross margin to increase to approximately 41 percent, driven by sales growth of Ryzen, EPYC and datacenter GPU processor sales. For comparative purposes, Q4 2017 revenue was $1.34 billion, adjusted for the ASC 606 revenue accounting standard, and included blockchain-related GPU sales of approximately low double-digit percent of overall AMD revenue. 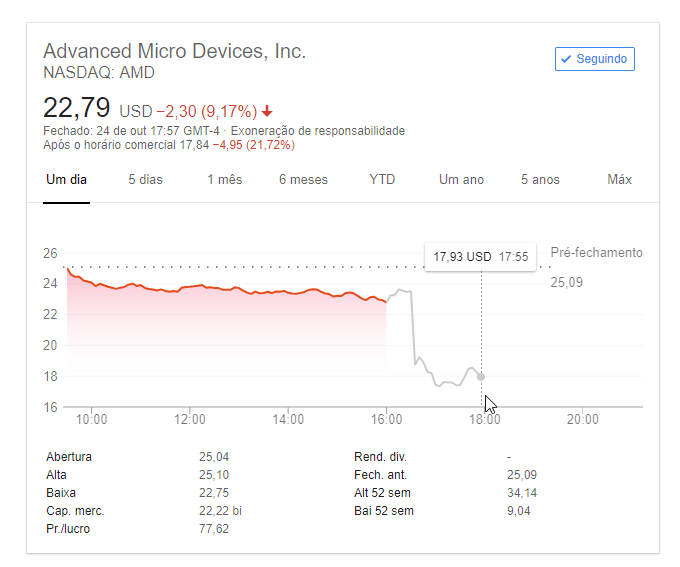 #2
Its funny because the results are not that bad.
#3
Excuse me for being stupid but does this mean AMD is no longer losing money?
#4
AMD has been profitable since Ryzen launched essentially. But this quarter GPU sales being down = stock investors lost there minds and the stock prices fell. Meanwhile they turned a profit and posted a dividend per share.
#5

Apparently Nvidia went down for some reason by 9% too.
#6

crazyeyesreaperIts funny because the results are not that bad.

Bc they want to scoop up the stock on the cheap. It’s always manipulation.
#7

Vya DomusApparently Nvidia went down for some reason by 9% too.

Actually it was 27%, the 9% only shows before after market.
#8
Indeed, AMD have taken a big dive too:

But as Stud said, it's all manipulation at the end of the day, the stock price is just there for Morgan Stanley and the like to make money.
#9

champsilvaActually it was 27%, the 9% only shows before after market.

It was reported that Nvidia 23-25% of their total sales were in china and the tarrif wars will have an impact on it. Along with UBS reporting slow adoption rate of the RTX line.

As for AMD they continue to improve their GM %
#10
Short sellers love this. lol! I mean these results are not bad at all. GPU sales were down from before because of mining dump. But they didn't lose money.. Looks like their cpu side is indeed moving along just fine. Rome wasn't built in a day lol. I went AMD after 8 years of being intel. Bunch of friends did too. Amd I have seen the trend continue, every year you will see them tick up that marketshare I think.

I am not sure how this is bad. I think zen 2 will eventually get them even more revenue if the rumored numbers are true.
#11
Time to buy some AMD stock.
#12
Daily reminder that stock market is filled with bullshit.
Add your own comment
Sep 26th, 2020 14:50 EDT change timezone
Sign in / Register