by
Raevenlord
Sep 3rd, 2019 11:42 Discuss (12 Comments)
Primate Labs, developers of the ubiquitous benchmarking application GeekBench, have announced the release of version 5 of the software. The new version brings numerous changes, and one of the most important (since if affects compatibility) is that it will only be distributed in a 64-bit version. Some under the hood changes include additions to the CPU benchmark tests (including machine learning, augmented reality, and computational photography) as well as increases in the memory footprint for tests so as to better gauge impacts of your memory subsystem on your system's performance. Also introduced are different threading models for CPU benchmarking, allowing for changes in workload attribution and the corresponding impact on CPU performance.

On the Compute side of things, GeekBench 5 now supports the Vulkan API, which joins CUDA, Metal, and OpenCL. GPU-accelerated compute for computer vision tasks such as Stereo Matching, and augmented reality tasks such as Feature Matching are also available. For iOS users, there is now a Dark Mode for the results interface. GeekBench 5 is available now, 50% off, on Primate Labs' store.

:)
#4
Looks like the scores scale in a more realistic way one but id still not look at this benchmark as a genuine way to compare CPUs.
#5
browser.geekbench.com/v5/cpu/30666 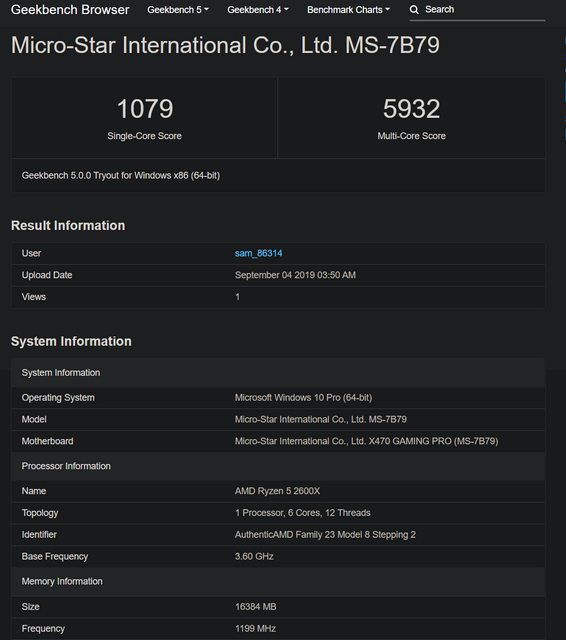 Wow, the scores are very different from the last version.
#6
browser.geekbench.com/v5/cpu/38665
#7
with all the other free bench mark programs available what makes this one special?
#8

DeathtoGnomeswith all the other free bench mark programs available what makes this one special?

kapone32It is made by Geekbench lol

DeathtoGnomeswith all the other free bench mark programs available what makes this one special?

Mostly known as a phone benchmark... So I'd say crossplatform.

kapone32It is made by Geekbench lol

R-T-BMostly known as a phone benchmark... So I'd say crossplatform.

ahhh phone benchmark... I think I have one of those around here.
Add your own comment
Jan 28th, 2021 07:00 EST change timezone
Sign in / Register