by
btarunr
Nov 7th, 2019 01:56 Discuss (23 Comments)
Ahead of their launch, low-resolution pictures of two nearly identical MSI TRX40 PRO series motherboards surfaced on the web, the TRX40 PRO 10G, and the TRX40 PRO WiFi. The former is characterized by a 10 GbE wired Ethernet connection through an included add-on card, while the latter features 802.11ax Wi-Fi 6 WLAN. The two appear otherwise identical, with a couple of M.2 slots on the board, four additional M.2 slots on a cooled add-on card, four PCI-Express x16 slots, eight DDR4 DIMM slots, and other storage connectivity that includes four SATA 6 Gb/s ports, and U.2 port. From the looks of it, the new for the 3rd generation Ryzen Threadripper looks identical to TR4, which bodes well for people wanting to use their TR4-compatible CPU coolers or water-blocks on the new platform.

I'm assuming some WS oriented boards will have 5-6 full length slots. This board from MSI is from their most budget line-up.
Budget in TRX40 of course being uber-expensive, but you can always go higher eh.
#3
1989 called and wants its high resolution GIFs back...

Have some better pictures. 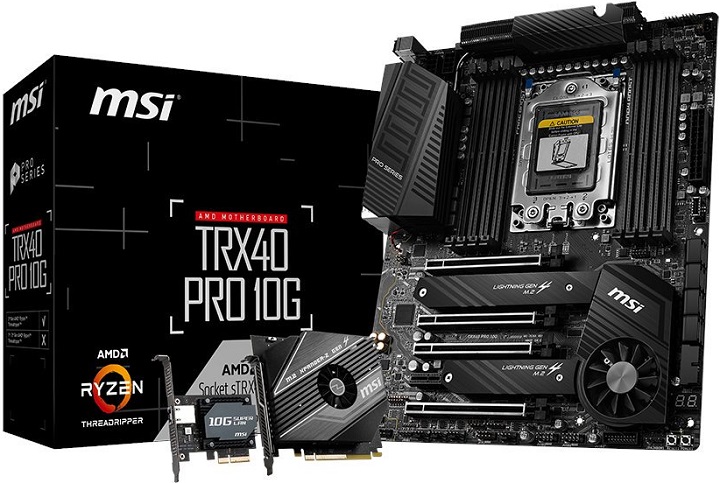 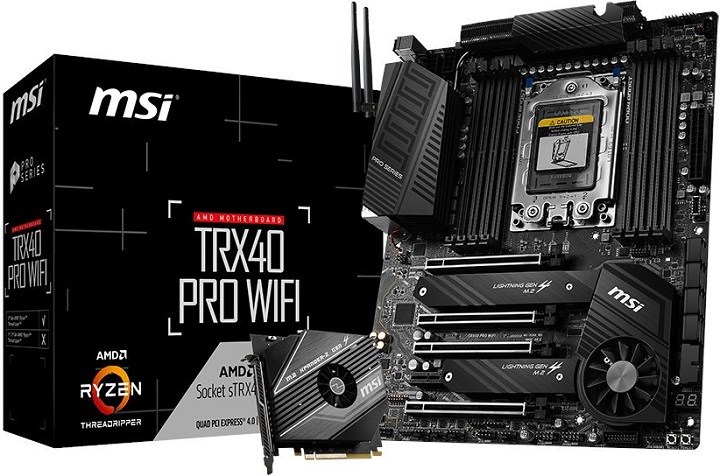 Source: [MEDIA=twitter]1192332366359851009[/MEDIA]
#4
Guru3D has higher res pictures www.guru3d.com/news-story/msi-trx40-pro-series-motherboards-photos.html
#5
Also, rumoured pricing for the Threadripper 3960X as well as packaging pictures.
videocardz.com/newz/amd-ryzen-threadripper-3960x-to-cost-1399-usd
#6
I am waiting to see if there are severe teething issues like their earlier counterparts, advertised clock speeds, OS scheduling, GPU associated issues, etc.
#7
Some potential board prices. 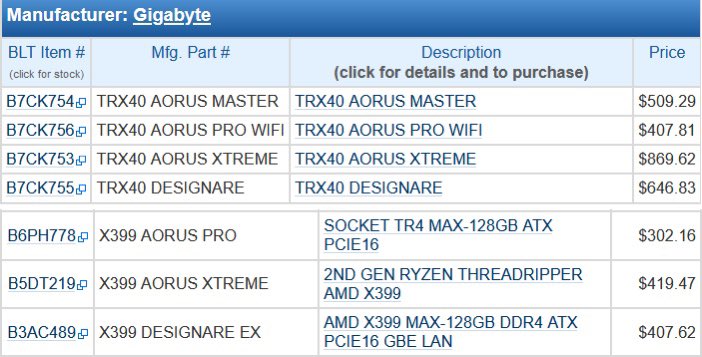 Source: [MEDIA=twitter]1192233343925944320[/MEDIA]
#8
Looks like they’re approaching 60mm on the chipset fan, but still, bleh to active cooling. Considering the prices they’re charging for some of these boards, you’d expect them to be able to figure something out.
#9
Let's welcome tiny fans on add-on cards now. As if they weren't disturbing enough on the board itself.
I feel so much like socket 939 again.
#10 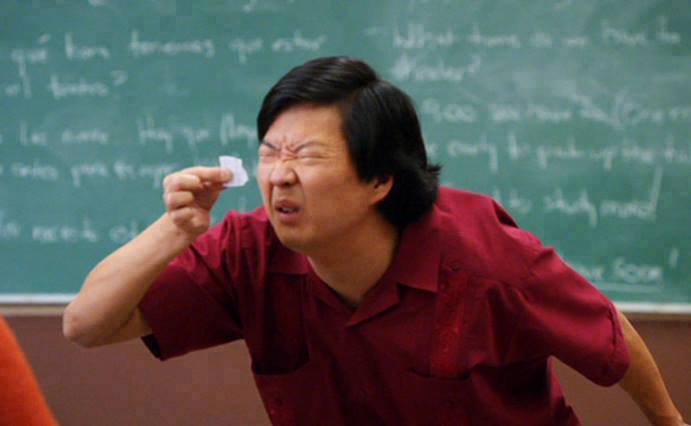 TheLostSwedeAlso, rumoured pricing for the Threadripper 3960X as well as packaging pictures.
videocardz.com/newz/amd-ryzen-threadripper-3960x-to-cost-1399-usd

Wow this could mean that it could cost way north of $2000 Canadian to get into this. The crazy thing is that is just the board and CPU. At those prices I do not see very much adoption. Personally speaking I will keep my X399 system and get a 2920 or 2950. The talking points about these boards are WIFI 6 (Which you can do yourself for about $50) and PCI_E 4.0. Though nice I already see faster speeds with my RAID 0 arrays. If nothing else these should drive down the prIce of existing TR4 parts, especially the boards....maybe. :( On an anecdotal note it is funny that Intel is now way cheaper than AMD in the HEDT space.
#12 TheLostSwedeA higher resolution picture of the board.

I see they are still using that Jrainbow 4 pin for 5V ARGB. There is currently no product that I am aware of that can work with that. I even went so far as to call MSI about it and the technician basically said exactly that.
#15
MSI is getting a bit too creative with feature names. Lightning USB 20G? WTF!!?? :kookoo:

Source: [MEDIA=twitter]1192410160779522049[/MEDIA]
Soooo many spoilers right now...
Pricing confirmed it would seem, unless there's been a last minute change.
Earlier leaked clock speeds were off the mark a bit though. 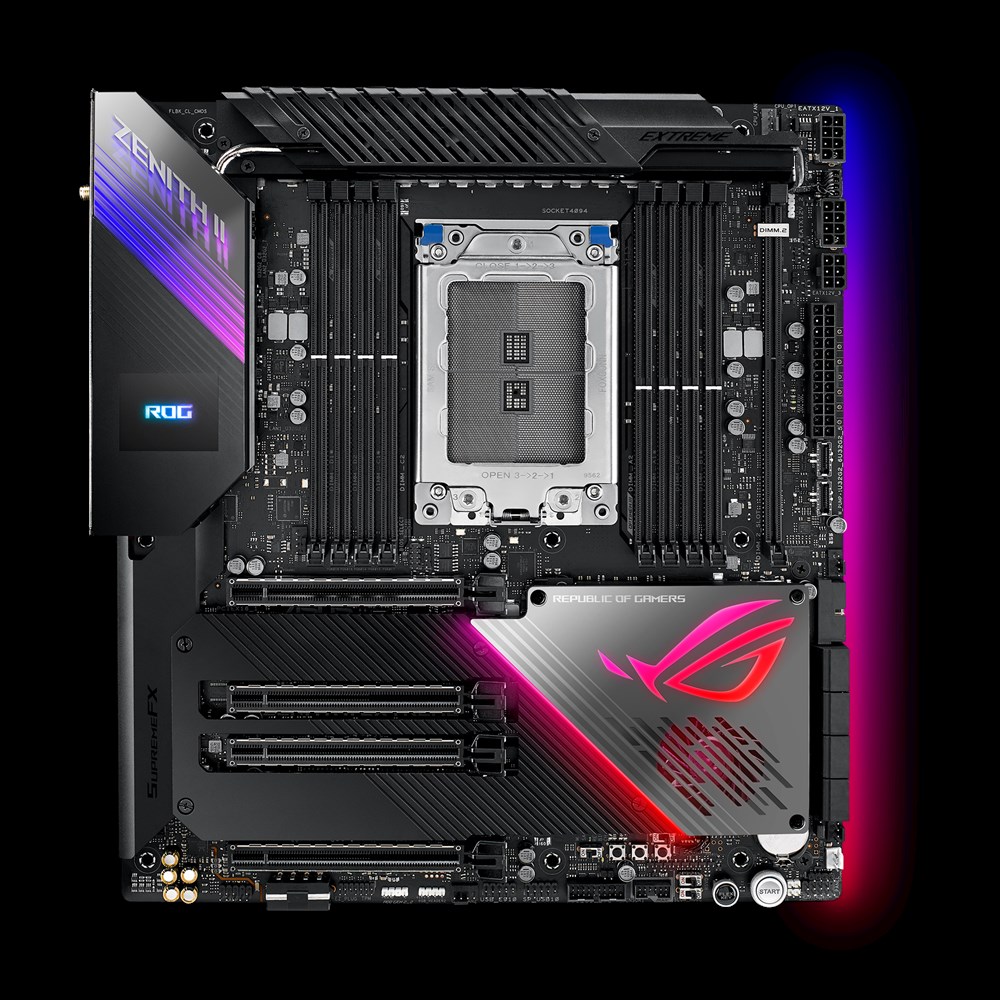 Since dual cards are out Id rather see more pcie slots. M.2 not so much.
#22

hellrazorWould anybody happen to know if any of them have PLX chips so I can split up (at least one) x16 slot?

There is no need for PLX chips on this platform. The CPU handles all of the lanes connected to the PCI_E x16 slots and also long as the board supports lane splitting (which all X399 boards do) it should be a non issue. IN fact I would say the picture of the MSI boards support that as they show a 4x Expansion card.
#23

hellrazorWould anybody happen to know if any of them have PLX chips so I can split up (at least one) x16 slot?

Most boards are x16, x8, x16, x8 if they have four slots, or 3x x16 in the case of Asus, except the Zenith II Extreme which is confusing, based on the specs.
PLX chips aren't really needed on these boards and as there's support for bifurcation, you can also use add-in cards that splits up the lanes without the need of a PLX chip or similar, such as 4x x4 NVMe SSDs to a x16 card interface.
Add your own comment
Jul 9th, 2020 21:09 EDT change timezone
Sign in / Register