by
btarunr
Apr 25th, 2012 13:32 Discuss (50 Comments)
EA Crytek's blockbuster title for spring 2013, Crysis 3, promises to be equally visually intense for DirectX 11 PCs and consoles, not because the PC version will be running, strictly speaking, a "console-port", but that the console version will be running a "PC-port". Crytek is developing ways in which visual effects possible with DirectX 11 PC graphics hardware can be reproduced on Xbox 360 and PlayStation 3, by making the console hardware work in a way it's normally incapable of. This could be coming up with custom code for each new kind of visual effect.

"We want to make sure as much as is humanly possible can translate from a DX11 variant into a DX9 variant, that will work almost as good on an Xbox console to whatever extent we can, because we don't want the experience to be different between the platforms," Rasmus Højengaard, director of creative development at Crytek, told Eurogamer. "It is very, very difficult, but it is possible. It just requires a lot of effort. Some of the stuff these guys are making work on consoles now is absolutely amazing. It's render features that shouldn't theoretically work on consoles, but they've managed to construct code that can emulate a similar thing from a… hack and slash sounds wrong, but they don't have the same streamlined pipeline you would have with a DX11 structure, but they can get to a similar result just by experimenting and using tips and tricks," he added.

To cite an example of that, Højengaard said that while he couldn't confirm that Crysis 3 for consoles could feature parallax occlusion mapping (a very advanced, resource-intensive feature), Crytek has managed to get it to work on console hardware. "That's a very advanced feature, and it shouldn't theoretically run on a 360, but they made it run on a 360," he commented. Højengaard's statements come with a rider, that Crytek will not implement DirectX 11-like visual effects if they severely impact performance. "What it all boils down to is to what extent they're able to use this without choking the console," he said.
Source: Eurogamer

And I guess, this is all PR talk and nothing else.

Here's a 2006 technical demo for the Radeon X1000 series (with parallax occlusion mapping): 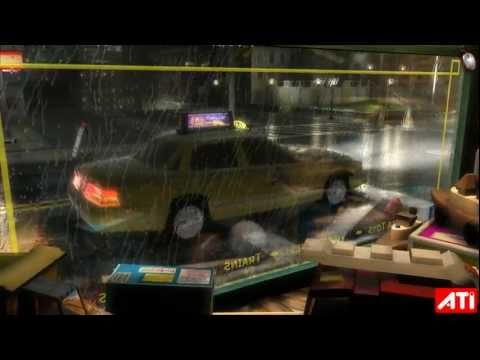 Instead of concentrating on DX11 features for consoles, why not concentrate on an actual fucking storyline instead of throwing retarded aliens into the mix.

Jerk-offs.
#9
throwing aliens in? did you play the first game?
#10
So this means that Crysis 3 will be a complete open area like Crysis 1 - YEAH RIGHT. What good is DX11 effects if you are restricted to following a set path like Half Life.
#11

digibuccthrowing aliens in? did you play the first game?

imitationIt had aliens. But no story.

exactly, crysis 2 was no different. it's a valid complaint, but reading it it sounded like he expected there to be a storyline and no aliens, as though that wasn't the opposite of the first game.
#13
love all the hate :lol:

makes a change to see a dev putting work in and working with what they have instead of just cutting features out.

at least with this we will really see the old consoles put thru their paces and what they can do, kudos crytek for that imo :thumb:
#14
If you care about graphics and therefore care about these features, you aren't gonna be playing any Crysis game on the console.

So... I don't know why they are wasting their time. Just do the DX9 console version and spend your time developing the graphics for the people who care and can tell the difference... PC gamers.
#15

TC-manSo, then can we, PC gamers, have the same treatment, i.e. Crysis 3 in DX11 that looks like a Crysis in DX12?

And I guess, this is all PR talk and nothing else.

Here's a 2006 technical demo for the Radeon X1000 series (with parallax occlusion mapping):

This is one of the best tech demos i've ever seen back then. And its still impressive now. The sadest thing is, most of todays games don't look nowhere near as good as this tech demo from 2006.
#16
^agreed. ATI and nVidia come out with some pretty cool tech demos, yet it takes soo long for games to catch up

BigMack70If you care about graphics and therefore care about these features, you aren't gonna be playing any Crysis game on the console.

So... I don't know why they are wasting their time. Just do the DX9 console version and spend your time developing the graphics for the people who care and can tell the difference... PC gamers.

believe it or not, some ppl can't afford high end PCs.
#17

xBruce88x^agreed. ATI and nVidia come out with some pretty cool tech demos, yet it takes soo long for games to catch up

believe it or not, some ppl can't afford high end PCs.

believe it or not, it doesnt take a high end pc to run DX11 games.

not the year, the demo.:laugh:

crytek can wave what they want in my face ,i am not buying untill its been out 2 months, the dusts settled and its 15 quid , you owe me crytek(2 ):p

eagerly awaiting it tho:shadedshu:D
#19
Can't lie, Crysis 2 is one gorgeous game in DX11 and pretty much maxed on my computer, and I wasn't irked by the delayed DX11 patch because I honestly found the game was pretty good. They've already taken the linear complaints and are trying to make the game more like the first Crysis or so interviews are saying. I have faith this will be good, as well as the fact that the newest SDK of the Cryengine 3 has supposedly native DX11 in it therefor we should have day one DX11 support with no issue.
#20
related to that tech demo, ATI said it could run on the xbox "xenos" core, last comment in the following post.

oh and the demo actually came out in 2005
#21
Crysis, what a joke! :slap: crytek
#22
What good is nice graphics with 15 F.P.S.???:laugh:
#23
It showed in Crysis 2 and it's showing here now, they're putting more resources into the console version than the PC version (optimizing the graphics for consoles, making the gameplay and story "console-friendly"). I can't believe how frustrated I'm getting with Crytek recently. :banghead:
#24
Good for Crytek ! They can put their money in any kind of development they want and we can respond in kind by buying or not buying their games.

They also think that the next-gen consoles should block used game sales completely.

When Hojengaard [director of creative development @ Crytek] was asked by CVG what he thought about the rumored initiative to block pre-owned, he said, "From a business perspective that would be absolutely awesome. It's weird that [second-hand] is still allowed because it doesn't work like that in any other software industries, so it would be great if they could somehow fix that issue as well."

Nothing like comparing apples (the productivity/service software market) to oranges (the entertainment market). :rolleyes:
#25
The way that Crytek has turned the other way, Crysis 3 is gona be a PC port to Consoll has probably something with the community. Crysis 2 was a total failure for us PC gamers, and Crytek is now trying to make it up for us PC gamers. And the question is gona be this, are we gone belive them? They have failed us one time with Crysis 2. And they have to convince us that they want us PC gamers back, I know there is many ppl out there that want to give Crytek an new chance to fix the damage. But will it be enough...

As we also can se on Mycrysis.com, there is almost no action there any more. It is dead like graveyeard cuz ppl have given up their hope that Crytek can fix Crysis 2.

As u said Per Hansson "Fool me once shame on you.
Fool me twice..."