by
btarunr
Aug 6th, 2018 08:00 Discuss (70 Comments)
AMD announced its second-generation Ryzen Threadripper high-end desktop (HEDT) processor series, succeeding its lean and successful first-generation that disrupted much of Intel's Core X HEDT series, forcing Intel to open up new high-core-count (HCC) market segments beyond its traditional $1000 price-point. AMD's 16-core $999 1950X proved competitive with even Intel's 12-core and 14-core SKUs priced well above the $1200-mark; and now AMD looks to beat Intel at its game, with the introduction of new 24-core and 32-core SKUs at prices that are sure to spell trouble for Intel's Core X HCC lineup. The lineup is partially open to pre-orders, with two SKUs launching within August (including the 32-core one), and two others in October.

All four SKUs are drop-in compatible with existing socket TR4 motherboards based on AMD X399 chipset, requiring a BIOS update. All X399 motherboards on the market support USB flashback, so a previous-generation CPU is not required to flash to the latest BIOS.

The 4-die 2970WX and 2990WX should logically have 8 memory channels and up to 128 PCIe lanes, because you are adding up the connectivity of all four dies on the MCM; however, there are no socket TR4 motherboards in the market or on the horizon, which have 8-channel memory slots, or PCIe slots that utilize all those PCIe lanes. "Drop-in compatibility" with existing X399 motherboards could hint at the likelihood of the 4-die, 24-core and 32-core SKUs probably only having quad-channel DDR4 memory interface, and just 64 PCIe lanes.

How AMD is wiring the dies out on the 24-core and 32-core MCMs remains a mystery. We know from how EPYC is wired out, that the SP3r2/TR4 socket has four distinct "zones," each corresponding to a die. Wiring out 1 memory channel per die may neither be possible nor desirable. It may not be possible because current socket TR4 motherboards are built for MCMs with just two active dies, the diagonally-opposite ones, and as such the memory wiring of the four channels terminate at the pins of those two active dies; it may not be desirable either, because one memory channel per die would severely cripple memory bandwidth for single-threaded or less-parallelized tasks that AMD likes to localize to one die with dual-channel memory access.

The same logic could apply to PCIe. PCI-Express 3.0 x16 slots and M.2-NVMe slots on existing boards are wired to terminate at the two diagonally-opposite "active" dies of the first-generation Threadrippers. This could mean that the two additional active dies on the 24-core and 32-core SKUs rely on the Infinity Fabric interconnects to access memory and PCIe devices. On the 4-die EPYC MCMs, each die is connected to the three other dies using an Infinity Fabric link. Each link has a 25.6 GB/s (per-direction) bandwidth.

It's probably for this reason, that the 2970WX and 2990WX are targeted more at pro-sumers who actually use software that can utilize those many cores; while the 2920X and 2950X are targeted at high-end gaming builds, in which you're gaming, streaming, and doing a whole bunch of other things in tandem.

AMD's press-deck for today is posted verbatim below.

It's pretty crazy. I'd like to know how many cores are boosted to 4.4GHz.
#3
Intel are due for some serious ass kicking in the HPC HEDT segment,serves them right.
#4
Suppressed they went for Proshop as their Norwegian preorder online retailer, was Komplett on the original Ryzen launch.

Komplett is the Norwegian equivalent to Newegg, Proshop is not that big.

SlizzoIt's pretty crazy. I'd like to know how many cores are boosted to 4.4GHz.

BrusfantometSuppressed they went for Proshop as their Norwegian preorder online retailer, was Komplett on the original Ryzen launch.

Komplett is the Norwegian equivalent to Newegg, Proshop is not that big.


Given good cooling, it should be able to boost beyond 4.4, maybe? since it will have 180W to play with.

According to the slide Komplett should also take pre-orders so I'm guessing they're just slow to update their site.
#10 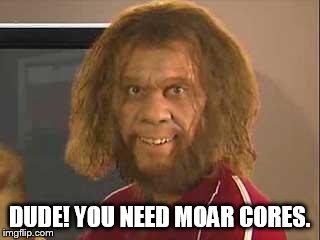 As of JESD79-4B 3400 wasn't included. Perhaps there is a draft standard that is widely expected to become official. AMD would know. Still if not official it isn't JEDEC.
#12

SlizzoIt's pretty crazy. I'd like to know how many cores are boosted to 4.4GHz.

Kinda throws this argument into the gutter that Ryzen doesn't clock well or high enough. The next gen can't come soon enough.
#13
These are looking good, I am really curious to see benchmarks , temps and power consumption. I am glad that AMD is growing and becoming more of a competitor for Intel
#14

ssdproAs of JESD79-4B 3400 wasn't included. Perhaps there is a draft standard that is widely expected to become official. AMD would know. Still if not official it isn't JEDEC.

Anandtech says DDR4-2933, like the rest of Ryzen 2.
#15
This 2990WX is the definition of market disruption. Zen core is a savior for CPU market since Ryzen launched. Kudos to the engineers for their innovation and to the leaders for deciding to offer incredible vfm products in all price levels. Let's see if and when Intel will up their game bringing better vfm products from their side also. Competition in all fronts of cpu market guys!
#16
Yeah, ssdpro is correct in that as of JESD79-4B, there is no 3400 standard. I doubt there will ever be one as JEDEC standards tend to go in 133/266 MHz increments. Maybe a 3466 in the future? Probably with DDR5?

ssdpro2920X @ 649 looks like good bang for buck being 12 cores and a fair price that an average consumer might pay; they do for gfx cards so why not cpus? Beyond that 12 or even 16 cores, our software is so far behind these core counts; we need actual progress in frequency increase rather than core spam. Both Intel and AMD need to stop the rush to glue cores together instead of actual innovation. We need 8 cores / 16 T at 5or 6ghz before 24 cores at 3.

Intel paused the core count war in 2010, what did we(consumers) got for that? same cpu every year with %5 performance increasment most of which coming from similar clock spead increasement? so no core count war is welcome.
#18
An excellent follow-up. More cores, lower prices compared to last year's identical configurations. And correctly marketed towards content creators, because few people besides them actually need that many cores.
If there was any fear that the original Zen was a one-trick pony, I believe Zen+ took care of that for good.
#19
Can't wait for reviews and how well the turbo works, how well the cooler works and details how much power it uses.
#20

FrickCan't wait for reviews and how well the turbo works, how well the cooler works and details how much power it uses.

I would argue none of that really matters (much) compared to how many cores you can get at those prices.
Fwiw the turbo works as well as it does for the other Zen+ CPUs.
#21
But does it run Crysis?
#22

HujkisBut does it run Crysis?

yes it has run a crisis in Intel :)
#23
I wonder when the consumer line will start seeing 4.4+GHz regularly, when they do, they will really start to be compelling options for people who just want to game.
#24

GorbazTheDragonI wonder when the consumer line will start seeing 4.4+GHz regularly, when they do, they will really start to be compelling options for people who just want to game.

I see no reason a 4 or 6 core configuration without HT couldn't do just that. But that in the eyes of people buying core counts these days, SKUs like that might make AMD look bad.
#25

HujkisBut does it run Crysis?