by
Raevenlord
Aug 28th, 2018 07:15 Discuss (38 Comments)
A Time Spy benchmark score of one of NVIDIA's upcoming RTX 20-series graphics cards has come out swinging in a new leak. We say "one of NVIDIA's" because we can't say for sure which core configuration this graphics card worked on: the only effective specs we have are the 8 GB of GDDR6 memory working at 14 Gbps, which translates to either NVIDIA's RTX 2070 or RTX 2080 graphics cards. If we were of the betting type, we'd say these scores are likely from an NVIDIA RTX 2080, simply because the performance improvement over the last generation 1080 (which usually scores around the 7,300's) sits pretty at some 36% - more or less what NVIDIA has been doing with their new generation introductions.

The 10,030 points scored in Time Spy by this NVIDIA RTX graphics card brings its performance levels up to GTX 1080 Ti levels, and within spitting distance of the behemoth Titan Xp. This should put to rest questions regarding improved performance in typical (read, non-raytracing) workloads on NVIDIA's upcoming RTX series. It remains to be seen, as it comes to die size, which part of this improvement stems from actual rasterization performance improvements per core, or if this comes only from increased number of execution units (NVIDIA says it doesn't, by the way).

my comment was satire, just you know and before anyone else triggered too...
#4
My GTX1080Ti and GTX1080 had scores of 10.5k and 7.8k respectively on 2025 MHz (with a similar CPU score, so assuming 4c/8t from the screenshot).
Provided that this assumed GTX2080 frequency of 2025 MHz is accurate, Turing should be 10-15% faster per theoretical FP32 TFLOPs :)
#5
For it to be as close as the Titan X Pascal is impressive. Don't forget that the driver the guy used is not even optimized for it when he benched it.
#6
So that means the 2070 isn't going to follow the previous pattern of being (almost) as fast as the previous gen's Ti model but they still expect another $100+ for them.

Tsukiyomi91For it to be as close as the Titan X Pascal is impressive. Don't forget that the driver the guy used is not even optimized for it when he benched it.

Tsukiyomi91Don't forget that the driver the guy used is not even optimized for it when he benched it.

What's that supposed to even mean ? Is there a driver that is "optimized", why didn't he used that ?
#10

Vya DomusWhat's that supposed to even mean ? Is there a driver that is "optimized", why didn't he used that ?

Pre-release drivers...there won't be an "official" or optimized drive until later.
#11

That way that was phrased is that the "optimized driver" or official or whatever was available and he chose not to use it. If the damn thing is already available, what the hell is the point ?
#12

Optimised for what, a benchmark they have access to on hardware they designed and built, have tested, developed drivers for common operating systems, finalized specifications, released to manufacturers, built, and are shipping to retailers for retail sale in less than 30 days after claiming this was a 10 year Project?

I don't know how you managed to decipher that comment and conclude it's impossible but hats off to you for doing it. :roll:
#17

Vya DomusI don't know how you managed to decipher that comment and conclude it's impossible but hats off to you for doing it. :roll:

it would be awesome to be wrong. But nope, I give up. I seen too much sh*t came out from this gpu monopoly that now I have lost any hope. This will be the first time in hw history that new gen hw bring the same price/perf. ratio (or worst) of the old one.
#18
Just a few more weeks and we can actually find out the truth but if these results are genuine the performance is ok not impressive
#19
I don't think this "puts to rest" any worries about performance gains.
It was hardly long ago when the 970 took on the 780Ti at a much lower, AFFORDABLE price point, and then the 1070 won over the 980Ti, although at a price premium which should not have been the case.
Now you need an even more costly 2080 card to compete with a 1080ti, which means the 2070 will not be a match for it.

If you take the quality of NV drivers of the last months, or even 1,5-2 years, a pre-released driver may not be as bad as it sounds.
#22 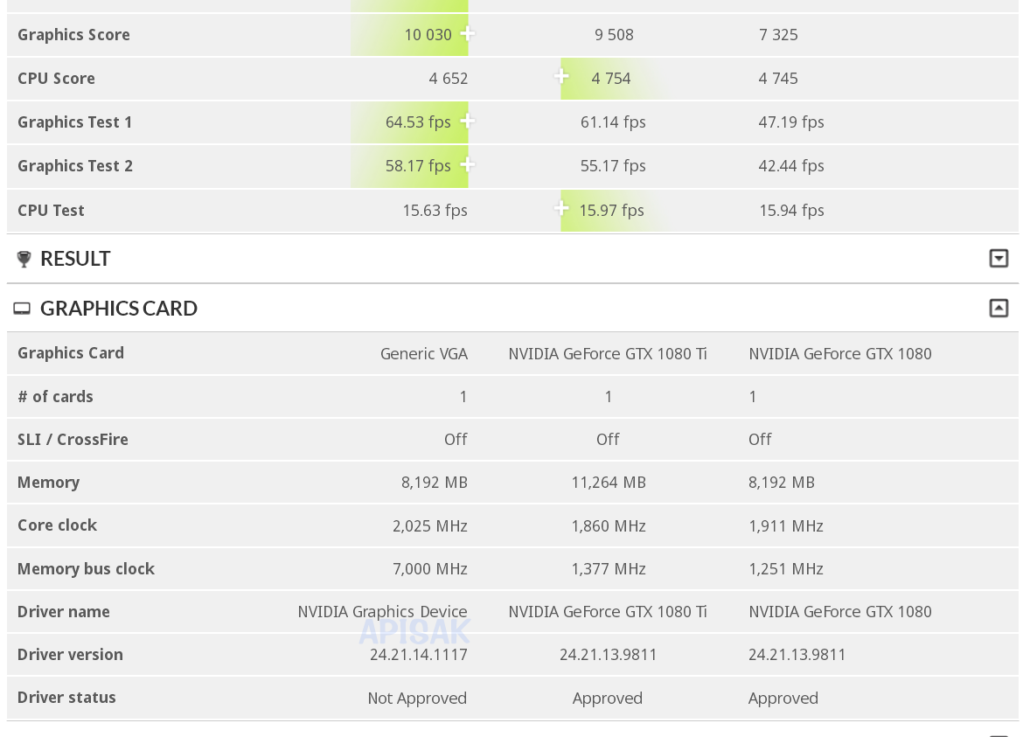 trog
#25
that's 2 GTX1070 in SLI, not in single card config. Of course it'll beat single GPU setup in benches... (not really surprised, IMO) Until then, I'll wait for more reviews & benchmarks. This one just scratched the surface.
Add your own comment
May 16th, 2022 07:27 EDT change timezone
Sign in / Register